Arthur Schaper
|
Posted: Dec 23, 2017 12:01 AM
Share   Tweet
The opinions expressed by columnists are their own and do not necessarily represent the views of Townhall.com. 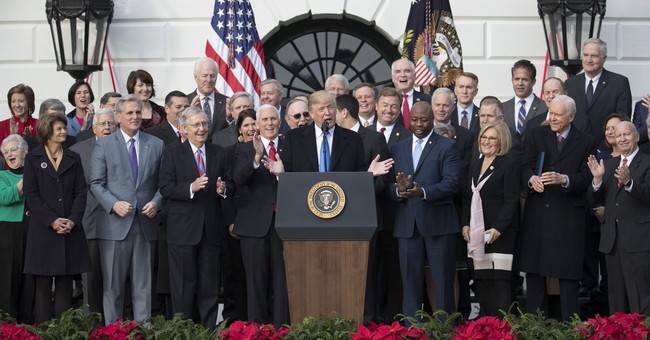 I don’t know about you, but I’m happy with the tax reform package signed by President Trump. He fulfilled a number of promises with a more cooperative Republican Congress, and all in time for Christmas!

This country’s previous corporate tax rate was uncompetitive, chasing away large businesses and corporate firms. Understandably, they inverted their corporate headquarters or invested in low-tax countries like Ireland. Now, Europe is worried because American firms in those countries are coming home. Major corporate firms are pledging or actively investing in the United States. Established firms are awarding American workers with bonuses. Contrary to the media lies and the left-wing spin, working families will keep more of their money with expanded child credits and the doubled standard deduction. Income tax rates across the board have been reduced.

Yet numerous media-hyped studies and polls have either presented the tax reform package as a minor success with the public … or downright unpopular. The consensus reaction has concluded that Republicans once again gave away the store to Big Business, to corporate cronies, to millionaires and billionaires, and middle-income earners and working-class voters are getting the shaft.

The Bernie Sanders class warfare rhetoric has become so easily and readily repeated, it’s boring. Of course, if 50% of the public relies on national corporate media for news, the lingering animus shouldn’t surprise anyone.  The misinformation war against free markets, limited government, and constitutional rule is still waging over the minds of the next generation. To our benefit, post-Millennials are avoiding college altogether and jumping right into the job market and entrepreneurship. But they are not the largest voting bloc for conservatives to reach out to. Working class voters in the Rust Belt are witnessing the return of manufacturing and energy jobs, i.e. West Virginia and Pennsylvania.

Despite the good times, Democratic activists are angrier, more organized, and determined to prove themselves right at all costs, even if it means ushering in more poverty, despair, and economic stagnation for all but the most politically connected of their liberal elites. The commitment to this myopic fanaticism came through clearly when an interviewer asked a group of students about the GOP tax plan. They immediately panned it. When the interviewers revealed key parts of the plan, and it was presented to them as Bernie Sanders’ plan, the students accepted the plan. The ideas are great, but the media, academia, and entertainment industries’ rabid hatred toward Trump and Republicans still sours thoughtful political discourse.

Without an engaged response, this animus will poison next year’s elections. Trump and his council of political counselors are taking steps to prepare for Election 2018, but how? If they think that passing reforms and economic growth will ensure widespread victories next year, they are greatly mistaken. Domestic and foreign policy victories alone are not going to work.

Here’s what conservatives need to do, and the GOP leadership in the White House and on Capitol Hill better pay attention:

First off, Republicans are damn fools to pursue any kind of DACA fix. The fate of the young illegals in this country are not our problem. Republicans need to review and memorize the set answers which former US Senator and Presidential contender Rick Santorum gave to a young illegal pleading for her “right” to stay in this country. Republicans should let the program sunset without further acclaim, then pass the RAISE Act, limiting legal immigration and granting Americans priority in their country’s workforce. Republicans need to push funding for the border wall without delay.

Second, Republicans need to tout the successes of the Tax Cuts and Jobs Act, and find the most creative ways to do so, forcing the corrupt, anti-American media to report on these victories. Instead of allowing the false narrative “all corporations are bad” to dominate the news, they need to fight back and drum up heavy media attention on the economic victories for working Americans. President Trump’s rallies have harnessed the media’s attention on the plight and now victories of working families. Those kinds of victories will fight the false plutocrat narrative pushed by the left.

On this point, I would submit that Republicans in Congress are pushing back at the “Greedy GOP” narrative. Trump was not ashamed of his wealth while running for President. Chairman of the Senate Finance Committee  Orrin Hatch briefly dominated Twitter’s hashtags and headlines when he slammed progressive leftist US Senator Sherrod Brown over the Democrats’ hollow class warfare “crap”. Hatch was born in the working class, but worked his way up to prosperity and political opportunity. Those accomplishments are nothing to be ashamed of. After signing the landmark legislation, Trump reminded the reporters in the standing-room only Oval Office that Americans will see the benefits immediately. Good, but make sure to remind everyone as much as possible, Mr. President.

Third, conservatives and Republicans need to demonize the Democrats for voting against tax cuts, the repeal of the hated Obamacare individual mandate, and the expansion of job opportunities for all Americans. Happy voters are great, but angry voters will go the extra distance to cast their ballots against the political party which they view as inimical to their best interests.

Fourth, and this part is for the long haul: conservatives need to forcefully confront the anti-capitalist narrative on college campuses. These riled-up Millennials and post-college graduates are driving the anti-wealth media fraud about the GOP Tax Reform package. Helping corporations expand and grow is good for the economy, and inequality does not matter when even the poorest among us are more prosperous. Conservative activists need to understand that the anti-Trump media is not gone yet. Angry progressives and feisty, demanding Democrats have not stopped, either, and economic prosperity alone won’t change minds about President Trump or Congressional Republicans.

The Tax Cuts and Jobs Act legislative victory is a major win for the Trump Administration, but the political victories in Election 2018 require on-the-ground training, engagement, and confrontation to protect GOP majorities in Congress. Let’s hope that Congressional leaders will get the hint.