Hey Hey, Ho Ho—DACA Has Got to Go

Arthur Schaper
|
Posted: Sep 02, 2017 12:01 AM
Share   Tweet
The opinions expressed by columnists are their own and do not necessarily represent the views of Townhall.com. 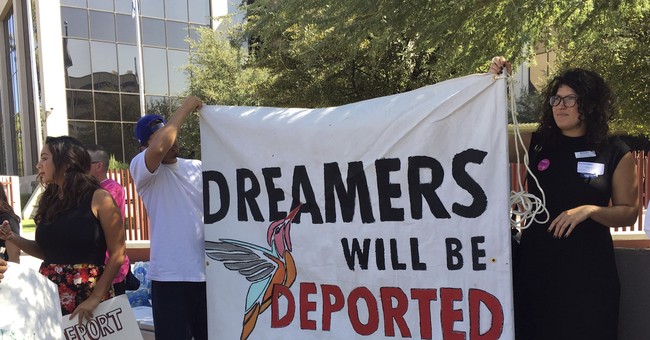 I have argued the illegal immigration discussion on many levels. I have outlined the attacks on our country’s sovereignty. I am sure that millions of you have read on this news site as well as other media organs how the DACA program is unconstitutional, and an extreme executive overreach. Hopefully, you read something that I wrote on this divisive issue three months ago: “I’m a DREAMER TOO!”

I am a dreamer. Yes, and I have a dream that the elected officials commissioned to enforce our immigration laws will stop being baited by the sob stories of young illegal aliens who were brought to this country by their law-breaking parents. Besides, there are many American dreamers whose dreams have been cut short by illegals, like Dominic Durden, Jamiel Shaw Jr., Ruben Morfin, Drew Rosenberg, among many others.

During the presidential campaign, Trump made it crystal clear that he cared about American dreamers—their dreams come first—I would add foremost and finally, not the rights of illegal aliens. “But what about the young illegals?” I have had this discussion back and forth with close friends as well as younger people on colleges, policy makers, and those who enforce our immigration laws. We are a nation of laws, and sovereignty and security go hand in hand. No more guilt-tripping, please. Nope. The only thing lacking is the political will to enforce our laws, which then presidential candidate Ted Cruz had announced during one of the final contentious debates before the make-or-break primaries ensued earlier in the year.

Political will is needed. Why is this so hard? The Democratic Party has played the race card, the identity politics game, but they are now losing. They exploited this illegal issue, tugging at the heart-strings of the average voter. All Americans who are still heartbroken about the difficult plight of “The DREAMers” need to come to California. Then again, even the native-born Californians don’t want to live here. They could go to Texas, and see what these illegal alien youth are doing in that legislature, too.

The violent arrogance of this sticking, needling DACA cohort is astounding. Thy have burst into state legislative sessions demanding amnesty. One lawmaker had the guts to call ICE and scare them off! On college campuses across the country, too (not just in blue states) young illegals are taking advantage of legal loopholes and diffident state legislatures who think that they can thumb their noses at our federal laws. In a Cudahy, CA city council meeting, the fierce hatred from these illegal youth should condemn DACA outright. Young illegals wearing bandanas, holding Communist signs, agitating in public, violating our public meeting laws—these young illegals here and elsewhere are not innocents. They are now joining the Antifa hordes—the same hordes shutting down freedom of speech and attacking innocent citizens

Yet lawmakers still fall for the “poor illegal” lie, especially Republicans. Illinois Governor Bruce Rauner is pandering for Hispanic support in his tough re-election fight. Despite his epic backbone in one budget battles, he signed off on a sanctuary state bill. What is this man thinking? Does he not understand that slip-siding upside-down, amoral compromising is why this country faces this convoluted immigration mess? Chicago, Illinois is the only illegal-alien magnet municipality in the state, and it’s going bankrupt. If Chicago goes down, Illinois goes red. Pretty simple concept. But no, like many squishy Republicans more concerned about not looking bad than doing good, Rauner went with the “poor illegal” narrative.

Enough! It’s time for us to stop being nice. It’s time for men and women in Washington and throughout the states to stop governing from their hearts and start leading with their minds. In fact, most politicians want to cave and roll out the red carpet to the “poor illegals” who were brought here against their will.

Reports have circulated before and after today that Trump was cutting the program. Now there’s a delay. Who are the culprits making all the noise?

2. Silicon Valley—these are abject liberals and their Millennial cohorts who think that they can devise an app for just about everything. There is no social media device that will excuse lawlessness. Pay American techies more money, you tightwads!

3. “Conservative” US Senators like Thom Tillis of North Carolina. He has been pushing legal status programs for illegals for the past three years. Geez, when will GOP politicos get a clue? We don’t want amnesty!

This is what needs to happen, President Trump:

2. Issue a time-limit for all former DACA recipients: 6 months to return to one’s country of origin. No one should cry about this. The program was called “Deferred Action,” was it not?

3. Ensure adequate staffing in American consulates around the world. Then those illegals can get in line and enter the country the right away, with the advantage of speaking English, with American education and upbringing.

4. Ensure that every immigrant (meaning lawfully present resident) has been taken care of who is still waiting for their full naturalization status.

Yet Trump is thinking about making a deal with Congress? Why? He already has bad Republicans on the run, including Jeff “Open Borders” Flake. Conservatives are poised to pick up the Alabama US Senate Seat (go Judge Moore!) Ohio and Montana are flappable US Senate seats in 2018, along with the 2012 and 2016 red states won by Romney and Trump.

No more deals. The American people have seen their best interests danced away with the Potomac Two-Party Bipartisan shuffle. Stop this immigration lunacy for good. Build the wall, deport them all, watch American wages rise, and crime rates fall. By 2020, the American electorate will be so thrilled with Trump’s MAGA agenda, that illegal immigration will have become a minor political footnote.