President Trump, I'm a DREAMER TOO

Arthur Schaper
|
Posted: Mar 02, 2017 12:01 AM
Share   Tweet
The opinions expressed by columnists are their own and do not necessarily represent the views of Townhall.com. 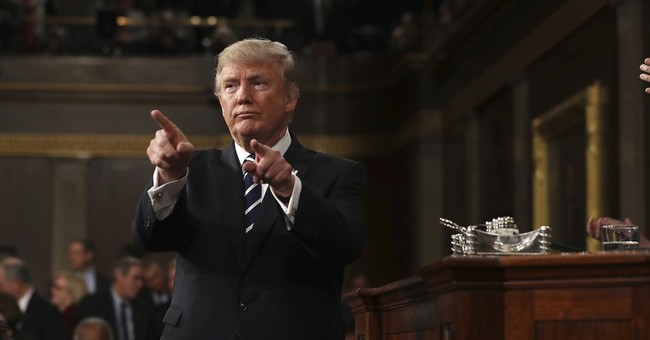 President Trump is on a roll.

He is preparing to build the big, beautiful wall.

He has signaled his glowing support for our federal and state law enforcement officials.

He will defund sanctuary cities, hire more ICE officers, and double-down on deportations.

He honored a fallen naval officer. He reaches out to families who have lost loved ones on the fields of battle overseas, or on our streets overrun with gang violence.

Someone finally threatened Chicago with a full-on national guard takeover. That city has gone from mismanaged to purposefully in decline. What more can one say about Democratic mayors and their sanctuary cities? They want votes, they want to feel good about themselves and play tough with our President. The truth is, though, they are like little children grabbing the leg of full-bore linebacker. No one really notices them, aside from laughing at their public fecklessness.

I have to hand it to Trump. Our president Trump is kicking rump on the economy, on deregulation, and he is putting his foot down demanding the repeal of Obamacare.

But on one issue, I am very concerned.

DACA is still in effect. There are still illegals in this country who can apply for deferred status. This is the “Come to the altar” moment when it comes to immigration.

Like many, I did not see a problem with granting legal status or some kind of pathway to citizenship besides the path already laid out in our legal codes. After all, a two month old brought to our country by unthinking parents should not be punished, right? Yet following the 2014 surge of unaccompanied minors along our borders, a manifest which ended the career of Majority Leader Eric Cantor, I decided that enough was enough.

Two hours before I attended my first city council meeting in Huntington Park, CA to protest their appointment of two illegal aliens to city commissions—yes, you read that right—I listened to comedian Paul Rodriguez declare without hesitation on CNN—“Send the kids back.” By the way, liberal Republican gubernatorial candidate Neel Kashkari bluntly announced his verdict on the illegal alien youth: “Send them home.” And so did conservatarian Congressman Dana Rohrbacher.

What is holding back politicians and candidates from stating the pure and simple immigration policy “Deport all illegals”?

Congressman Lucille Roybal-Allard, the biggest amnesty panderer in LA County, told me that “it’s not fair to those who were brought here years ago as children to send them to their home countries.” It’s all about the DREAMers. “DREAMer” stands for “Development, Relief, and Education for Alien Minors. Again – no one wants to write the accurate word: illegal.

Granted, the children who were brought here without their permission are in a tight spot. Yes, I have spoken with vocal immigration enforcement activists who recognize this very tight and difficult decision. But you know what? This country is already full of dreamers. They are our American youth, born and raised or naturalized in our country. Even in Los Angeles, naturalization ceremonies feature young people as young as 6 or 7 years old. If these children could make it into this country llegally, what excuse does the 28-year old DACA recipient have?

What excuse do the two illegal aliens on the Huntington Park city commissions have for not become naturalized citizens?

The truth is that a growing cohort of Millennial illegals have become radicalized. They do not want to embrace and assimilate into our country. They believe now that the federal government must grant them amnesty. They believe that they are entitled to citizenship. Yet like the snowflakes who watched Hillary’s chances melt away on election night, the dreams of a starship to citizenship have dissipated.

Since Trump’s election, these youth have become wild, rabid, violent. You don’t believe me?  Check out these videos below from a recent city council meeting in “sanctuary city” Cudahy, California:

This La Raza activist called Americans of all backgrounds “wetbacks” and “tax cheats”.

This teacher indoctrinates kids that enforcement is a form of racism.

This teacher [yes, a teacher!] called a well-educated councilman who has not advocated for open borders a “sellout”.

Check out the fascist look of these thuggish illegal aliens in this video.

For me, it has gotten personal and even deadly. These DREAMers have turned into NIGHTMARE-ERS. They are swarming into protests, organizing in public squares and attacking the authority and integrity of this country. This is wrong. The sheer arrogance of some of the young illegals is deeply disconcerting. One of them even said to me “I am an asset to this country.” I never presumed that the United States would cease to exist or could not function without me. I am a citizen, and I can only humbly claim that I am a blessed beneficiary.

And I am a dreamer, too, like millions of dreamers who have witnessed the American Dream delayed or diminished because of state governments and the past 8 years of the previous Presidential administration. What’s unfair is that our nation’s compassion—and her 300 million plus citizens (dreamers)—continues to be put on trial. What’s unfair is that American citizens who want the federal government to care for American citizens are being branded as bigots, backward hicks, or modern-day members of the KK--simply because they want their borders secured and their country and culture safeguarded. Rick Santorum was right: “We are a nation of laws.” He then told a 27-year old “DREAMer” to return to her home country and make the world a better place.

We are dreamers, too, President Trump!