Popcorn: The Self-Destruction of “The Democracy,” as Seen in California

Arthur Schaper
|
Posted: May 22, 2017 12:01 AM
Share   Tweet
The opinions expressed by columnists are their own and do not necessarily represent the views of Townhall.com. 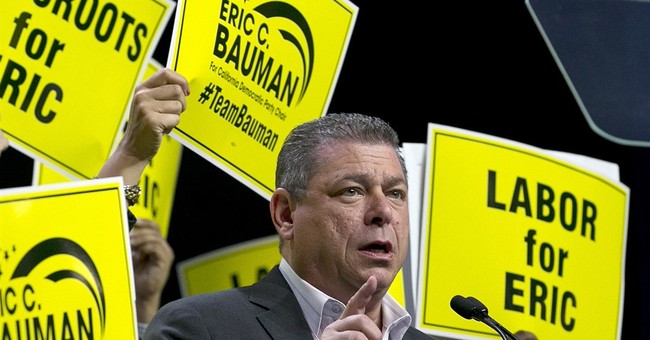 Until the American Civil War, the political party of slavery, secession, segregation, and now socialism, referred to itself as “The Democracy.” After the slow burning of DNC leaks, Crooked Hillary’s corruption, the dripping frauds of the DNC elections, and recently the chaos of the now-concluded California Democratic Party convention, it’s clear that there is nothing democratic about the Democratic Party.

I commiserate with my California liberal, progressive, Democratic friends. They really believe that more government, more socialism is the answer to our nation’s ills—but at least they believe in a fair, just process. But fairness and big government don’t go hand in hand. Communism is fundamentally unfair, taking from those who have and giving to those who don’t. Besides, the world has its problems, and solutions to the world’s ills cannot be solved with government-backed solutions. Trade-offs are the calling of the day. This is a fallen earth, and people are fleshy, power-driven, out for themselves. And that same drive for power means “Lie, cheat, and steal to win.” That only foretells Communism’s doom.

The progressives in our midst, 60% of whom were California Democratic Party delegates, still believe that people are basically good and more government will fix the world. After three days of listening to out-going Chairman John Burton—lots of profanity, punctuated with gesticulating middle fingers—it should be crystal clear that human beings, whatever their political affiliations, are flawed.

The first day of the California Democratic Party convention exposed the dissension in their ranks. Besides Chairman Burton’s curse-laden rants, the general order was disorder and heckling. Left-wing nurse associations agitated repeatedly for single-payer healthcare. When Democratic National Committee Chairman Tom Perez spoke to the Friday crowds, he got boos and heckling in double doses. The new DNC Chairman cheated for his seat, just as Crooked Hillary cheated for the nomination.

The California Democratic Party faithful have been berned, er … burned so badly, they were not interested in playing establishment games with Swamp Thing Clinton and Barack Obama. Of course, who was the alternative? Left-wing Muslim Keith Ellison, Congressman from Minnesota. This man had ties to the CAIR, the Muslim Brotherhood, and embraced the most radical of backgrounds and undergrounds—many of whom want to take down the United State of America. The future of the Democratic Party is communistic, Islamist, anti-American, and anti-Western: Cultural Marxism with an American flag hijab.

Now here’s the good news for Republicans and for our country. Based on the chaotic three days of the California Democratic Party convention, the same principles which Reagan expounded on in 1983 still hold true today. The desire for liberty is too strong in men, and their demand for justice will never pass away. There is something in human nature, that even as they pursue the expansion of the state into our daily lives, they want the rollout—and thus the rolling away of their own natural rights—to be done their way.

Self-interest, natural law, the Invisible Hand, all of these features of economics and political design will undermine every push for Communism in any form. Indeed, the California Democratic Party is a microcosm of this cultural truth—and spell the national party’s devastation. Nationally, “The Democracy” has dissolved into conflicts over class or race. “Intersectionality” is the latest craze. The left-wing “factivists” are determined at all costs to ensure the hierarchy of victimization is protected from all attacks, foreign or domestic. All of you half-African, half-Asian elderly lesbians in wheelchairs now hold the cards in this political universe.

Funny thing is, though, that elections depend on votes. Today, most of the nation’s voters are working people, many of them of European background, but share the same concerns about safety, security, traditional values, and economic opportunity as all ethnic minorities. We are all Americans, right?

The end for the future of the Democratic Party has been laid bare to us in California. Corruption has been the norm. Everyone wins by kowtowing to the special interests. Chairman-elect Bauman certainly did. Mr. Big Pharma hustled to ensure that Prop. 61 for “fair pricing for drugs” failed miserably. Six months later, Bossman Eric sent out last-minute eblasts to ensure delegates that he is Gung-Ho for single-payer health care. FYI: Dianne Feinstein opposes it. So does State Assembly Speaker Anthony Rendon (or at least he talks that way). No one cares about white people, and the “white” president is routinely pilloried. The left-wing Berniecrats don’t trust Bauman to fight for the Bernie Revolution, since he was a vocal cheerleader for Crooked Hillary. In came Bernie-endorsed Kimberly Ellis, a vocal progressive with a hint of honesty.

Saturday evening, nearly 3,000 delegates voted with enthusiasm and anxiety. The final tally? Bossman Eric won by 60 votes. Just sixty. One has to wonder if they would have started flipping coins to ensure which way ballots would go—just like in Iowa. The media went nuts up and down the state. Bernie delegates were outraged again. First Hillary steals the Presidential nomination. Then Perez steals the DNC chairmanship. Now Mr. Anti-natural law, pro-crony Bauman steals the California Democratic Party chairmanship. Delegates demanded a recount. Kimberly Ellis threatened to sue. Nothing in the formal by-laws provides the process for a recount (I wonder why?) Then delegates started demanding Voter ID to ensure no ballot-staffing—and a recount!

Remember what I said about human nature? Right?! On Sunday, Ellis backed down, and Bauman took the gavel, but the Bernie Delegates aren’t backing down. They fled the convention floor and hosted their own meeting nearby. Communists fight for their way of tyrannizing the world, after all.

What do you know? The drive for the Communistic Democracy is hitting more snags. Progressive activists are abandoning “The Democracy”. The California Democratic Party’s crack-up is good for Republicans, with a promising California Comeback on the way. Could they become Republicans? They want what the GOP has worked for: good government, proper public service, an end to corruption, and expanding opportunity for individual voters and small businesses.