Bush Uprooted, or the Ebbing of Jeb

Arthur Schaper
|
Posted: Feb 22, 2016 12:01 AM
Share   Tweet
The opinions expressed by columnists are their own and do not necessarily represent the views of Townhall.com. 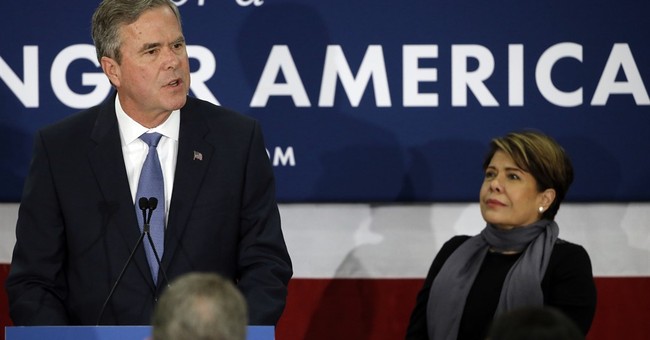 South Carolina was a bittersweet moment in Election 2016. Let me just get rid of the bitter, so I can focus on the better (the Bush uprooted).

Anti-Establishment Ted Cruz did not win one county in South Carolina. Not one. Ouch!

Is Cruz turning into Mike Huckabee 2008 and Rick Santorum 2012? I hope not, but if his showing in South Carolina is indicative of where he’s headed, then he needs to pack up and go back to raising hell on the floor of the U.S. Senate.

Now for the sweet, and it is too good not to relish.

John Ellis Bush, the man, the low energy candidate with big money, who could not muster any support, who had to beg audiences to clap, who could not lay the smack-down on Black Lives Matter, who would govern like LBJ, the DOA candidate, has dropped out. The Establishment Republican, with a capital E, and plenty of campaign capital behind him, simply could not budge out of single digits. Iowa, New Hampshire, and South Carolina pulled him up by the roots and chucked him away.

What surprised me, however, was how suddenly he announced his departure. “At least wait until Florida, Jeb!” I thought. Why not hold on through Super Tuesday and let the final deluge of delegates deracinate you completely?

The Bush exist is a turning point in American presidential politics. A big name and lots of money could not buy a nomination the way it could ten or more specifically sixteen years ago (George W. Bush). Where the older brother had won in 2000, Jeb crashed and burned for good, once and for all.

This is huge, people. Money is not buying our democracy, despite what Weekend at Bernie’s or Madam Hillary claim. Liberal economist Kenneth Galbraith has been proven wrong once again: advertising does not bewitch the public, and the free market does not have predetermined ends.

It was inevitable. Four problems overshadowed the former Florida Governor from the day he launched his Presidential bid—with kudos to George Will, himself a mi-parti Establishment talker and mi-parti conservative wonk in his own right.

1. Common Core. This education overhaul needs to be hauled over a cliff. This education regime (yes, regime) is Big Government and Big Business with backroom deals, and lots of taxpayer dollars for the corporate interests, with very little in the public interest. In Torrance, CA a record 800 fewer students are enrolled in Algebra One before high school compared to previous years. The parents cannot help their children with the “New Math,” and the administrators have no knowledge about the data mining.

The dumbing down of reading and writing, the emphasis on small technical passages, the lack of preparation for college learning: all of these liabilities spell doom for the next generation of students.

Our kids are not common, and the core problem with Common Core is precisely that!

2. Amnesty. Jeb was honest (Rubio isn’t, and I fear never will be). Bush 3.0 wanted immigration “reform.” He called illegal immigration an “act of love,” even though it really isn’t. The American People want a secure border, and they should not have to sign onto any form of amnesty or legal status to receive that requirement. The federal government refuses to secure our borders. Such treasonous conduct should disqualify a number of current federal legislators.

It uprooted Bush big time (and about time!)

3. The name. The Bush label. Bushie! How many people wanted another shrub in the White House?! Not very many, and that included Mama Barbara. She told her son as much, and the voters agreed. Jeb, you should have listened to Mommy. Yet she was a good sport and campaigned for him in the Palmetto State. What’s a mother for, but to be the strong shoulder your son can cry on when he realizes that his parents were right? No one wants a dynasty in this country. The Bush name carried a more sinister legacy, one of purplish hues infusing the red. Democrats were hoping for a replay of 1992, with Bush v. Clinton spelling victory for the progressives in Washington.

These three anti-Jeb liabilities tumbled into the fourth:

4. Establishment: I cannot write the E word enough times. “GOPe” is the common moniker on Facebook, Twitter, etc. If the voters think that you are going to do what the party bosses tell you to, the Washington cartel, and the major connected interests want instead of what is right, you are toast. During his second term, George W. Bush was careening toward what The Big E always wanted. Short memories can engender painful reminiscences. Not this time. Bush 43 wanted immigration reform in 2006, but We the People stopped him then. He pushed a Medicaid expansion: Ugh! The 2005 Highway Bill from Hell spent more money that the country did not have, including the Bridge to Nowhere.

This year, the GOPe has gotten a big fat Nope from the electorate, and the voters stopped a potential Bush 45 from even getting the nomination.

The anti-DC revolt is growing in this country: angry, livid, and uncompromising. No structured politician is safe. Pitchforks and torches have become blogs, tweets, and fed-up workers fighting for fewer jobs against entitled illegals, bigger government, and less respect for individual rights. I only fear that the uprooting of one Bush won’t remove the statist weeds in the field, and the anti-DC sentiment will torch good trees, too (like Cruz).

Republican primary voters are angry (count me in). The Republicans elected in 2010 and 2014 have done next to nothing to stop the rogue in the White House. No clear stance on the issues, the funding has not stopped, the spending has not ceased, the national debt increased, doubled under the Obama Administration. The tsunami of untrammeled populism became the ebbing of Jeb. The rising tide of Independents proves this discontent. And John Ellis Bush was the biggest causality yet.