I Wanted a Walker, Not a Talker 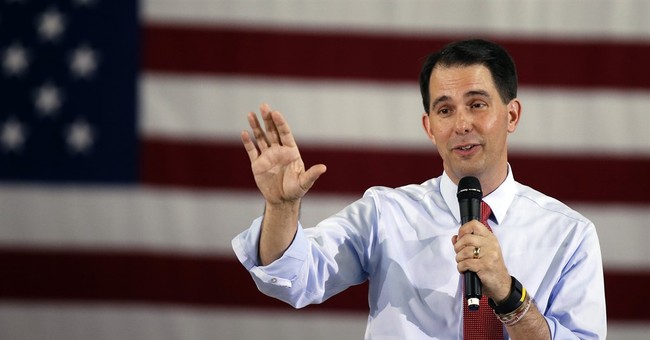 After celebrating a busy weekend with fellow conservatives and like-minded Republicans with “The Happiest Place on Earth” behind me, the bad news earlier this week hit me hard, and I felt like one of the saddest people. Wisconsin Governor Scott Walker, the Honey Badger who never quit, “Luke Scottwalker” who took on Dark Labor and beat them in their own backyard, who had enacted every conceivable conservative reform in the Progressive Death Star, suspended his campaign for President.

This is wrong. This should not be happening. But what happened?

On its surface, Walker was overextended, ready to take his campaign national. Why wouldn’t he? He had money, support, strong polling. Then the debates came. A real estate reality show rodeo clown, a dead-beat failed CEO, and a doctor with a penchant for healing minds – but not speaking his mind so well – sucked up all the oxygen in the room.

The second debate was just awful. I did not sit through all it. Three hours of “Trump said – what do you think?” Walker was not allowed to speak. He needed to shine in that debate. It was do or die, and he did not do, so his campaign died. The new media has turned on everyone, including the consensus conservatives. Perhaps there is some truth to the critique floating around out there: even Ronald Reagan could not get elected in the modern media frenzy obsessed with every mistake and change of thought and mind. The sound-byte has taken a bite out of the political process. “I’ll fix it” has become the quick fix-it rather than comprehensive plans for accomplishing reforms.

Walker’s decision to back away is a disturbing setback, not just a personal loss, but an indictment against our country’s current political culture. Fear, frustration, and rage have distracted voters away from records of accomplishment to whatever rhetoric will fire up the base. The Framers wanted an executive not chosen by how many Twitter followers or Facebook likes, not how many times “I have made great deals” or the color of his skin or his or her gender. In fact, the Framers anticipated leadership based on reasoned consent among electors, not populist pressure from the masses. I thought we had the epitome of such disastrous outcomes with Barack Obama. Perhaps this country is headed for another clash with populist outrage instead of principled governance. Forgive me for sounding a little like MSNBC’s Lawrence O’Donnell, but: “What is wrong with you people?!”

I have heard a number of people comment that Walker was bland and boring, bearable but unbecoming, a Tim Pawlenty Redux. With all due respect to Pawlenty (whom I wish had stayed in the race in 2012), Walker was no Pawlenty. Standing up to Big Labor and the Occupy Movement is no mean feat, and Pawlenty’s Minnesota “Gosh darn it, people like me” persona would not have defeated those hordes.

In fact, Walker was no Reagan. Walker exceeded the Gipper on many levels.

Reagan supported an assault weapons ban. From Day One, Walker defended the Second Amendment, and expanded the enforcement of the right in his state.

Ronald Reagan (along with Richard Nixon and even Gerald Ford) was pro-choice before becoming pro-life, most likely because of the world’s limited knowledge about life within the mother’s womb. Walker was pro-life from Day One.

Governor Reagan signed off on smog checks and other environmental regulations, which I have to pay for every two years to this day. Walker stood up to the EPA on Day One.

Reagan was still a union guy, wining and dining with the AFL-CIO. Walker left the unions whining and begging for mercy.

Reagan cut taxes, but did nothing to stifle entitlement spending. Walker’s Act 10 reforms balanced the budget without raising taxes or laying off workers, and of all the fifty states in the union, Wisconsin has the lowest – almost non-existent -- pension liability.

Reagan signed off on no-fault divorce, a decision which he regretted for the rest of his life. Walker defended marriage and family on Day One (in liberal Wisconsin, by the way), and even pressed for a constitutional amendment to protect the states from the creeping overreach of the Supreme Court. One article even suggested that Walker lost many donors because he refused to recognize, let alone celebrate same-sex “marriage.” By the way, many conservatives and even some moderates who differed on this issue still supported Walker.

President Reagan signed off on a sweeping amnesty, which left American citizens with the bitter betrayal which has soured immigration reform to this day. Walker repealed in-state tuition for illegal aliens, joined the lawsuit against Obama’s executive amnesty, promoted an American Workers First platform before anyone else (even Trump). Before suspending his campaign, he declared that this country should take no Syrian refugees.

And with that, I will leave you with the best moment of the First Debate – the only one that really counts so far -- the final comments from my candidate for President of the United States:

Reagan talked optimism, teaching us we could hate the government yet love it at the same time. Walker carried that optimism to an optimal level, showing us that the government should depend on us, not the other way around. Walker was a winner, not a whiner. He was an explainer, not a complainer, a team player, not a “me player.” Notice how he repeated “We” not “I”.

How else can I put it: I wanted a Walker, not a talker. Will it be too late for America? Time will tell if the other candidates can combine a strong record with an unwavering resolve in the face of media attacks, left-wing plots, and violent demonstrations.