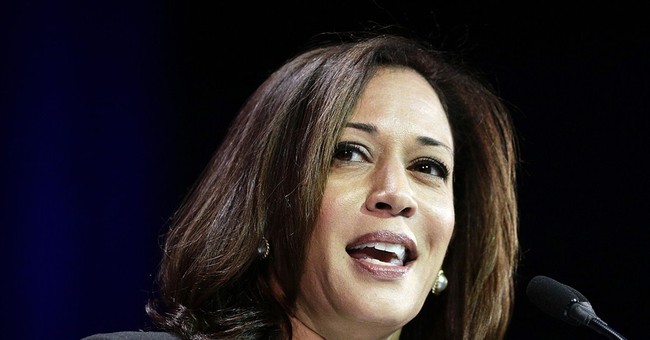 Aside from the growing reports of corruption or impropriety, she has forsaken her sworn duty to uphold and defend the United States and California Constitution. A lawless law enforcement officer, at the county and state level, Harris has no reason, legal or moral, for serving in the US Senate.

She refused to defend the Prop 8 State Constitutional Amendment which defined marriage as between one man and one woman, He unclear reasons would have not passed the bar in any law school or exam:

I declined to defend Proposition 8 because it violates the Constitution. The Supreme Court has described marriage as a fundamental right 14 times since 1888. The time has come for this right to be afforded to every citizen.

Which constitution? Her imprecision was duplicitous and political. Marriage as a fundamental right never implied that two people of the same sex could enter into a marriage. The basic right of any institution does not justify nor permit redefining it.

When the Supreme Court of the United States (SCOTUS) struck down the amendment on procedural grounds, she demanded that the Ninth Circuit Court of Appeals lift its ban on same-sex marriage licenses, even though the appellate court was required to wait twenty-five days before responding to SCOTUS judgments.

The Ninth Circuit Court of Appeals required the state of California to issue concealed-carry permits, yet AG Harris intervened and appealed the decision to a large en banc hearing. For someone who had argued against defending the state constitution for supposedly violating the US Constitution, she had very little credible ground for resisting enforcement of CCW permits.

Harris' office noted Thursday that if the ruling is allowed to take effect, sheriffs all over California -- including the Bay Area, where counties are rather tightfisted about concealed-carry permits -- could be required to issue permits based on nothing more than the applicant's stated wish to carry a gun for self-defense.

Is that not the very reason many individuals seek CCW? SCOTUS has reminded litigants and established in dicta (US v. Verdugo-Urquidez) and judgment (District of Columbia v. Heller) that the Second Amendment is an individual right.

Yet why did Harris appeal the initial decision? No constitutional reasoning, but a vague appeal to public safety:

Harris' office noted Thursday that if the ruling is allowed to take effect, sheriffs all over California -- including the Bay Area, where counties are rather tightfisted about concealed-carry permits -- could be required to issue permits based on nothing more than the applicant's stated wish to carry a gun for self-defense.

Her discretion to intervene and block the just "shall issue" ruling resonated with political calculation, not a principled stance.

Before state attorney general, Harris served as San Francisco District Attorney. Even then, her record of discretion and prosecution calls into question her allegiance to uphold the law and serve and protect those who elected her.

The San Francisco Chronicle reported that she refused to deport illegal aliens, as long as they were first-time drug offenders who completed a job training program. Not only did she ignore federal law, but she pandered to unlawful residents in the city during a prolonged economic contraction. Even former mayor Gavin Newsom refused to shield illegal immigrant youth from deportation once they had been arrested for crimes.

As Attorney General, instead of representing the extensive public safety needs of California residents. she personally reached out to outside law firms to provide legal services to the thousands of illegal immigration youth flooding the Southern US borders. This surprising migration influx surged in response to President Obama's misguided and unconstitutional Deferred Action on Childhood Arrivals (DACA) program.

She further signaled her support for President Obama's Executive Amnesty, seeking to continue implementing the order despite judicial stays in Texas, despite local and grassroots protests against illegal immigration, including this stunning display of civil disobedience in Murrieta and at the University of Southern California a year later.

Just last month (April, 2015), Harris announced that an "undocumented immigrant is not a criminal."

Illegally entering and remaining in the country is a federal crime. By stating that those who illegally enter or remain in the United States are not in violation of law is simply incorrect. However, many of these “undocumented immigrants” are not being prosecuted under the current administration.

In one of her latest US Senate campaign eblasts, the unlawful attorney general even celebrated President Obama's illegal, unconstitutional executive amnesty.

For a woman who touts her prior and current record of law enforcement, Harris has nothing to boast about, and yet a great deal to explain. For an officer of the court, sworn to uphold the chief charter of the state and the country, Harris ignores her word and calling as glibly as the current President of the United States.

As a lawless law enforcement officer, Attorney General Kamala Harris is not fit for higher office, and has no business serving in the US Senate.
White House Rolls Out Plan to Vaccinate Kids, But The FDA Hasn't Approved It Yet
Katie Pavlich
Biden's Border Crisis Hits Historic Milestone
Julio Rosas
New Study Shows That Men Are More Likely to Die from COVID-19 Than Women
Madeline Leesman
'We Refuse to Become the Vaccination Police': In-N-Out Tells SF COVID Police to Shove It
Spencer Brown
New Quinnipiac Survey Is a Disaster For Biden
Leah Barkoukis