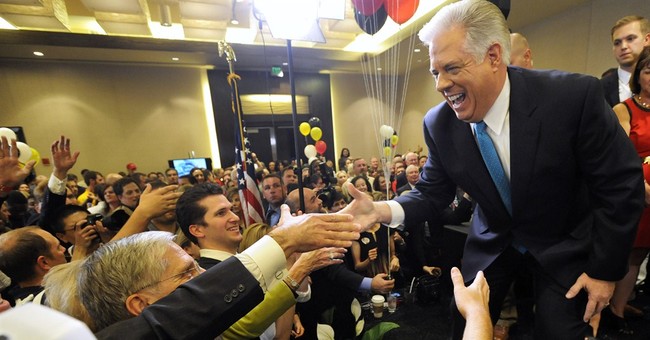 Maryland, the Old Line State, the frequent battleground for the Civil War, has become the tipping point for Democratic dominance along the Eastern Seaboard.

The last governor, Democratic two-termer Martin O’Malley, checked off every left-wing policy talking point: driver’s licenses for illegal aliens, gay marriage, and even took a shot at gun control. Like Obama, O’Malley shot himself in the foot tangling with the Second Amendment, and widespread advocates stormed Annapolis. So frustrated were law-abiding, taxpaying citizens, Western Maryland petitioned to secede from the state and set up their own Commonwealth. Who could blame them? The state government became so onerous, that allowing kids to play by themselves is now a crime, as well as chewing a pop tart to look like a pistol!

Maryland, the not-so-Merryland where unfettered Democratic dominance has turned the religious haven of persecuted Catholics (Lord Baltimore) into a haven of special interests persecuting businesses, taxpayers, and all citizens who believe that the government should protect the rights of the people, rather than the people securing the interests of the state. Did I neglect to mention that the state’s Obamacare health insurance exchange failed, to the tune of hundreds of millions of dollars? So badly, that Marylanders looked to equally unequal and illiberal Connecticut for leadership. Ouch!

Enter Larry Hogan, the Hero of Maryland and the National GOP. Who is Larry Hogan, and why should Republicans across the country care? This former son of a Congressman took Obama’s mantra of Hope and Change, and established an interest group for all working Marylanders: Change Maryland.

In 2014, Hogan launched his campaign for Governor against Democrat Anthony Brown, the hand-picked successor who would continue the same profligate, elitist policies of his Democratic predecessor. Brown talked up environmentalism and gun-control. Hogan listened and learned from the frustrated and angry Maryland electorate, fed up with the outrageous tax hikes, spending increases, public sector union grubby grabbing, and the flight of businesses and economic growth out of the state. O’Malley and the Annapolis legislature were so tone deaf to the needs of their constituents, they enacted a rain tax on three counties to deal with the bad roads and polluted Chesapeake Bay. A rain tax? Are you kidding me?

Granted, the 2014 election was destined to be a bad year for Democrats, with the six year itch dragging down the incumbent President’s party. However, let no one forget that Republicans controlling Congress lost seats in 1998 to “Slick Willy” Clinton, a reminder that political cycles provide no guarantees.

Hogan got busy, and so do his massive team of volunteers. Not waiting for inner city residents to “Get the message”, the Maryland Republican Party took their message to urban Baltimore County, and upset the political (read, “liberal Democratic”) establishment. Election Night, two surprises shook the GOP from their dogmatic doldrums: Ed Gillespie of Virginia was within striking distance of unseating Democratic incumbent US Senator Mark Warner, and Larry Hogan won a decisive victory in deep blue Maryland.

The day after Hogan’s historic win, Bloomberg News pundits shook their heads, scrambling to understand: “How did Larry do it?” They inadvertently answered their own question, outlining Maryland residents’ heavy taxation and weariness of Democratic machine-chicanery, and Hogan’s better campaign to correct those problems.

Governor Hogan got to work quickly, expanding school choice (and charter schools), making state government efficient and accountable, with good customer service, and tackling the state’s heroin epidemic. Most importantly, he pressed for fiscal restraint, the end of government waste, and the repeal of high taxes and fees. In his first year, Hogan fulfilled his campaign promise, and repealed the dreaded, hated rain tax. The otherwise Democratic legislature eased regulations to improve the economic climate in the state. The part-time legislature also cut off expensive, worthless state contracts.

Last week, Hogan declared before the state capitol: “It’s a great time to be a Maryland Republican, isn’t it?” Thinking ahead for his party and the state, the Governor is targeting key counties, seeking to engage then expand Republican registration. At the Maryland GOP convention, Hogan declared: “We’re back!” National Republicans needs to pay attention to this unlikely hero, who helped revive a brand once badly defeated and declared all but dead. If the GOP can bounce back in this one-party Democratic mid-Atlantic state, there is no stopping a Republican resurgence in moribund Rhode Island, desperately dry California, or in many other otherwise intimidating inner city communities.