The Game of Truth

Armstrong Williams
|
Posted: May 21, 2020 12:01 AM
Share   Tweet
The opinions expressed by columnists are their own and do not necessarily represent the views of Townhall.com. 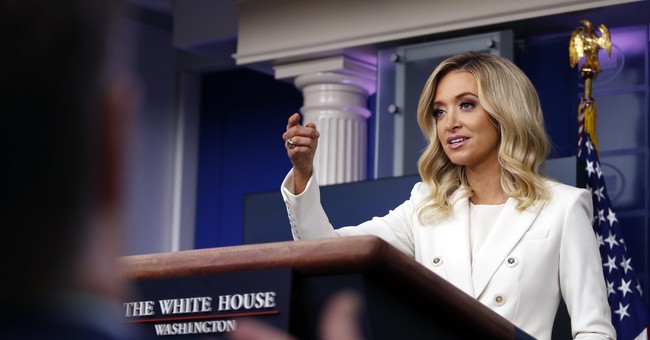 When newly minted White House Press Secretary Kayleigh McEnany took the stage last week for the first time -- the first time a Trump press secretary has issued a formal conference in over six months -- she encountered a ravenously bloodthirsty media gaggle. It was ready to pounce. Would they be able to totally eviscerate her as they had a slew of her predecessors? Well, no. She turned the tables on them all. Predators, it seems, had become prey.

While the task of how to feed and water the Washington press corps is no secret to those in the press secretary business, what's more impressive is when a White House press secretary can feed them the food of their own making. And so it happened. They served it up warm.

It came about 25 minutes into the press conference. Jeff Mason, Reuters' White House correspondent, asked: "Kayleigh, in a previous life, before you were press secretary, you worked for the campaign. And you made a comment, I believe on Fox, in which you said President Trump will not allow the coronavirus to come to this country. Given what has happened since then, obviously, would you like to take that back?"

From her perch atop the bully pulpit, McEnany did not wait around for replies. It was a "drop the mic" moment. But the point still stands. The mainstream media have printed various misinformed or later-to-be-corrected statements about the impact of COVID-19, mainly because they (like most of America) were still learning about the spread of the virus and its potential public health implications. The president was learning, too, in real-time. The difference is that he is blamed by the media for every statement he makes. If it's true, then it's insensitive, and if it turns out to be inaccurate, then it was a blatant lie.

At this point, it seems that the mainstream media exists solely to refute and oppose anything the president says. Of course, Trump is not perfect. He exaggerates. He makes blanket statements without caveat. And he is known to protect himself to the point of stretching reality. Those who have come to know him and work with him on a daily basis understand his foibles. But they also understand that the president is merely human. He breathes the same air and eats the same food we all do. He has hopes and dreams for his own life and for America that echo our own. Despite his many faults, he was duly elected to lead the country; he has our best interests at heart.

But the media's raison d'etre exists, not in the truth, but solely in opposition. When the president goes left, whether right or wrong, the media goes right. It is as if they have abdicated their roles as fact-finders and investigators and turned into repudiators. This is laziness at its worst. It lacks credibility and betrays an emotional bias that goes to the heart of truth and falsehood. If the media is so readily able to embrace falsehoods merely to combat the president, are they not just as guilty of the betrayal of truth they accuse the president of committing?

Perhaps the most cynical media iconoclasm centers around the seeming glee some pundits take in the tanking economy. It is almost as if they embrace forced closings and their devastating economic effects as the welcome price of ridding the country of Trump. Forget about the folks who are suffering. Forget about working mothers with children out of school and nowhere to go. All these pundits have to do is show up at their laptops and type away from the cushy surroundings of their high-end condos. But they aren't forced to make the hard choices of laying off workers or letting crops rot in the field. For them, reopening the economy is synonymous with losing the political battle.

We all want a free press that is able to question the official line. As a media pundit and commentator, I often question the president's approach. But it bears asking whether a press is truly "free" when it is bound by its preconceived notions of truth and falsehood. Perhaps ideological constraints on fairness and objectivity devalue their roles as the investigators and revealers the founders imagined when they enshrined the First Amendment.