Hatred Slashes the Bonds of Brotherhood

Armstrong Williams
|
Posted: Jan 10, 2020 12:01 AM
Share   Tweet
The opinions expressed by columnists are their own and do not necessarily represent the views of Townhall.com. 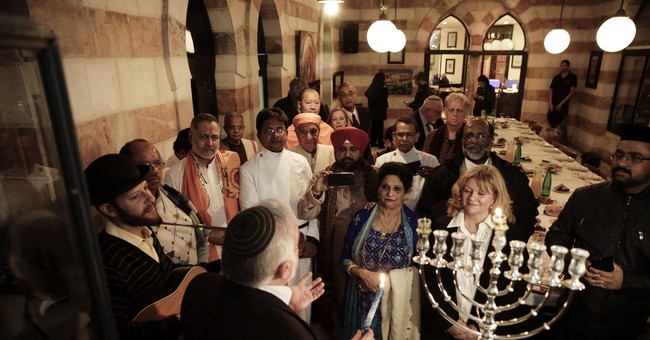 Another news cycle brings with it the news of yet another anti-Semitic attack targeting America's Jewish community, as well as a fresh attack on Christian worshippers at a church in Texas.

The scourge of bigoted hatred is not just alive and well; it is actually enjoying an uptick in this country. We need to be asking some very tough questions about the causes of this hatred. At the same time, it will be curious to see whether or not those who play a role in fomenting this terrible atmosphere of intolerance are willing to step forward and condemn it.

Just to put the horror of this latest anti-Semitic outrage into the proper context, the facts of the attack warrant repeating -- not out of a desire to be dramatic or hyperbolic but to illustrate how sick an individual must be to carry out such bloodthirsty and callous savagery.

The attack took place in Monsey, New York, which is home to a large population of Orthodox Jews. It was the seventh night of Hanukkah, and dozens of people gathered in the home of the rabbi in order to light candles and celebrate the holiday.

An individual walked through the front door, wielding a blade that survivors described as the length of a broomstick, and began slashing and stabbing innocents who had come together in religious observance.

In an instant, the holiday commemorating the Jewish people successfully overcoming attempts to wipe them out and rededicating their holy temple in Jerusalem morphed into yet another chapter of hatred toward this minority group.

It's the second attack in less than two weeks directed at innocent Jewish people whose only crime is going about their daily lives and observing their reverence toward the Creator. It will be interesting to see who steps forward to condemn this latest incident.

Will Louis Farrakhan step forward to condemn this wanton violence? It would be a welcome step given the outrageous and intolerant statements he has directed for decades at the Jewish community in the United States. Rep. Ilhan Omar has slandered Jewish Americans with anti-Semitic tropes about dual loyalty to Israel and supposed Jewish greed and undue influence by proclaiming that their involvement in the political process is "all about the Benjamins." What will she say?

The targeting of our country's Jewish community is accelerating, according to the Anti-Defamation League, which tracks such attacks nationwide. It is a disturbing trend that we must confront and treat with the utmost seriousness.

At the same time, we continue to see heinous attacks taking place within the walls of our churches. In the case of this latest incident outside of Fort Worth, Texas, a bloodbath on a much larger scale was prevented due to the fact that many of the worshipers were carrying concealed weapons. Thankfully, they didn't hesitate to draw those weapons to defend themselves and strike down the demented person who decided to open fire on innocents praying in a house of God.

As we enter another decade, our society seems to be coming apart at the seams. Bonds of brotherhood are being slashed and shot, replaced instead by heated rhetoric and hideous acts of violence.

We need to ensure that these senseless slayings spur us to action. It's not enough to shake our heads in disapproval or offer thoughts and prayers to the victims and their families. Instead, we must rededicate ourselves to demonstrating love for our fellow countrymen and mankind throughout the world.

The turning of the new year is an appropriate time to turn over a new leaf -- and make clear that we, as Americans, need to take care of one another and stop targeting one another. United we will stand; divided we will fall.