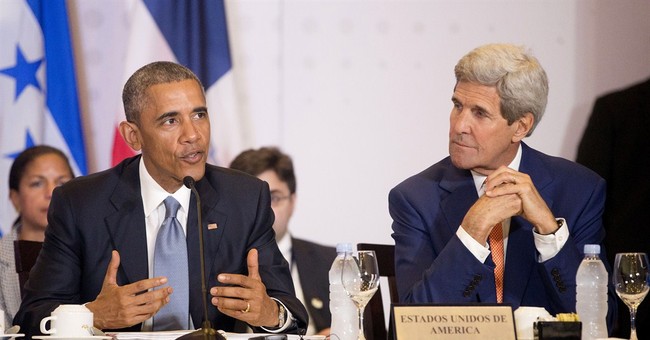 As if the Islamic Republic of Iran’s determined pursuit of nuclear weapons, track record of bloody terrorism, aggressive geopolitical power grabs, abhorrent human rights violations and history of lies were not enough – President Obama’s recent interview should prove to everyone just how dangerous the framework agreement announced in Lausanne on April 2nd really is.

Hiding under skillful rhetorical cover, Obama basically said that he believes a 10-year agreement keeps nuclear weapons out of Iran’s hands until dealing with the Islamic Republic becomes someone else’s problem. He essentially told the American public that our fears are true: he apparently cares about the fate of America’s national security, and the security of American allies only while he’s sitting in the oval office.

As we all know, Iran has mastered the tactics of intransigence, deceit and waiting the Western powers out over the years. Indeed, a key component of Iran’s strategy has always been to buy more and more time through extensions of diplomatic talks and the stonewalling of transparent inspections and verifications of its nuclear facilities.

Is anyone really surprised the president is acting this way? For quite some time now, many experts have condemned the Obama Administration for being blinded by the desire to achieve a foreign policy legacy at any cost. But can we afford to let this President’s legacy be a nuclear-armed Iran?

Obama’s words actually reveal just how flawed the Lausanne framework agreement is, riddled with Western concessions and Iranian nuclear gains. This disastrous interview also explains why such a sizeable disparity exists between the English and Persian versions of the text released in the aftermath of the Lausanne talks. We now know exactly why Iranian leaders walked away from the talks so exuberantly – they were celebrating the victory they had been so determined to achieve.

The Iranians succeeded in ensuring the framework for a potential deal would include immediate sanctions relief, and many more major rewards for Iran’s ongoing, reprehensible behavior. The framework agreement would allow the regime to maintain substantial uranium enrichment, develop unlimited advanced centrifuges, preserve its nuclear reactor at Arak and its underground nuclear facility at Fordo, all without committing to Russian disposal of enriched uranium stockpiles. Even more alarming, Tehran managed to curtail demands for snap inspections and investigations into past military nuclear work.

And if that were not bad enough, State Department Spokeswoman Marie Harf tried, unsuccessfully, to backpedal another revelation the President made in an interview. In a recent sit-down with NPR, President Obama confessed that Iran’s breakout time would be drastically shortened after just 13 years—and pretty much non-existent. Harf tried to walk this back, claiming that the President was discussing a hypothetical case in which the Joint Comprehensive Plan of Action had not been authorized.

The truth is that without a sufficient verification system in place, Iran’s breakout time will shrink to zero. A final agreement based on the framework may push back the date at which Iran may get a nuclear weapon, but it would do absolutely nothing to prevent it. When the final agreement expires, it will be up to Obama’s successor to clean up the nuclear mess he created.

Iran's Supreme Leader spoke in recent days of "devilish" actions by the United States, underscoring the Iranian belief that our nation is “the Great Satan." As always, the crowd began a familiar chant, “Death to America.” The Administration did not condemn these vile realities. Instead, it asserted that this was intended for a “domestic political audience” and that it somehow proved that the United States needs to negotiate a deal with Tehran.

When someone, or in this case an aspiring dominator of the Middle East with a track record of supplying money, arms, training and other support to terrorist organizations, says that our death is their goal, we should take them at their word. The best way to safeguard our national security, stand with our allies, and protect our interests in the Middle East would be actually preventing the world’s leading state sponsor of terrorism from acquiring nuclear weapons, not merely creating delays.

The President seems to think the American public is stupid. He campaigned on promises of “hope and change.” Lofty rhetoric, but we never saw much of either. Now, if the President signs an agreement that legitimizes and permits an Iranian path to a nuclear weapon, the only change President Obama will have made is that we will have no hope left.