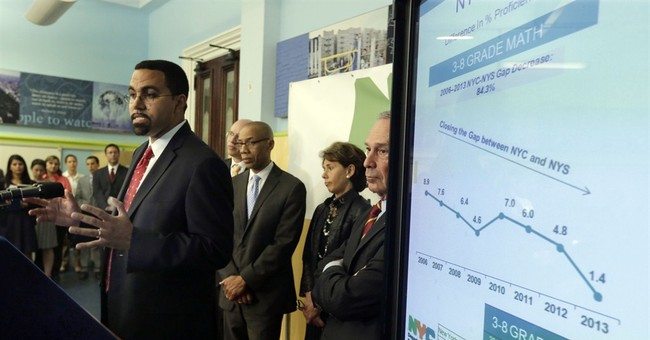 Last week, a listener of my radio show told me how her son had recently graduated high school and gone to college. He quickly discovered he could not keep up with the coursework because he could only read at a 6th grade level.

This is not an uncommon occurrence. In fact, it is typical.

State and federal funding for schools is determined by how many kids pass, graduate, as well as score on standardized tests. Administrators are pressured to pass poor students to ensure funding. Teachers are pressured to go along and teach to the tests. Kids know they will be promoted to the next grade, so many choose the path of least resistance.

You are left with a multitude of young adults that are not prepared for higher education or the work force because they were never held accountable.

There is plenty of blame to go around. We can start by looking at the failures of two groups at the top and bottom of the education debate: politicians and families.

Politicians are always talking about their commitment to ensuring our children’s future. Many truly do want to help reform education. However, they also know that if they kowtow to the latest educational fad they can get enough concerned parents to vote for them.

Election cycles create a notoriously short-term view in officials. As such, most education reforms start with good intentions but are not viable long-term solutions.

We end up with policies that focus on passing tests rather than understanding material and curriculums built around self-esteem and anti-bullying instead of math or science.

Funding was tied to student achievement to encourage administrators and teachers to make the institutions more accountable and successful. The unintended consequence was that schools began lowering standards in order to meet government benchmarks.

This created a cascading effect throughout the public system. Teachers were forced to lower their grading standards to meet graduation guidelines, resulting in many high school freshmen reading at a 5th grade or lower level.

Teachers scrapped original lesson plans in order to teach skills that should already be known. Since teachers were forced to spend more time with lagging students and slow down the class schedule, the other kids become restless and undisciplined.

Additionally, fad imperatives are shoehorned into the lesson -- such as anti-bullying programs and self-esteem building. For every minute spent on feel-good lessons and disciplining unruly students, another minute of knowledge-based teaching is lost.

Both politicians and parents are to blame for these wasteful policies. The politicians feed off the fears of parents, throwing money and blather and the latest media sensation that has mom and dad in a tizzy.

When I was growing up, my parents taught me responsibility, to treat others as you would like to be treated, to respect my elders, and work hard to make something of myself. They formed the core being of my brothers, sisters, and me.

When I went to school, these values shaped my classroom behavior and study habits. My parents expected me to do my best; in turn I expected to do my best. My teachers simply guided me towards the knowledge and skills I would need to succeed.

Apparently those duties are beyond many parents today, as they have demanded that teachers become surrogate mothers and fathers.

Why else would they demand schools teach (rather than simply enforce) morality over history or science? For what other reason would they insist their child never fail so he can believe in himself rather than learning how to overcome setbacks?

The students quickly learn that the system cannot afford to flunk them and school becomes a social function. In fact, the students begin to feel entitled to grades they never earned yet were always given.

Worse still, many parents actively encourage this behavior. They blame schools for their children’s failings but bully teachers into passing their child. They yell at teachers, principals, and school board members for disciplining their child. They sue schools for anything and everything. Students learn that complaining about too much homework, the mean teacher, or the bad food makes the problem goes away.

Young people graduate from high school expecting everything to be handed to them and run smack dab into the real world. Having never dealt with failure or the need to meet expectations, they flounder. How can we expect them to succeed when they were never really given the right tools?

But politicians and parents are not the only culprits for the failure of our education system. Next week I will address the institutional problems plaguing our public schools and what we can do to solve this crisis.