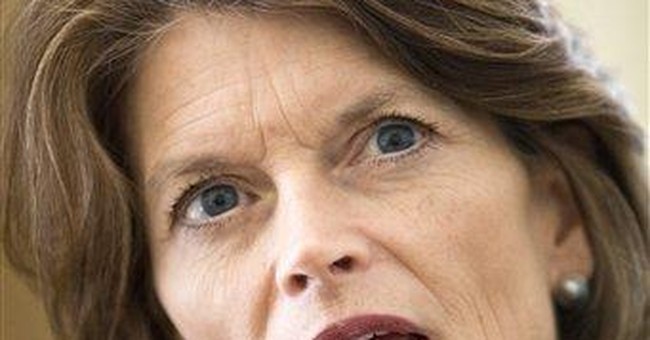 Lisa Murkowski was finally declared the winner of the Alaskan Senate race over the official Republican and Tea Party backed candidate Joe Miller. This race might not seem like much, but is a dismaying representation of how, when confronted with a candidate espousing principals they clam to hold dear, many people will instead choose the peddler handing out the most candy. To say this race was business-as-usual and a disappointing example of hypocrisy is an understatement.

Alaskans pride themselves on being tough, salt of the earth folks. They count wearing Carharts and hoodies as their Sunday best. Subsistence fishing and hunting is their heritage even when they have two years worth of salmon and moose in their freezer.

Joe Miller’s platform appealed to this self-perception: Alaskans are tough people who value their freedom and want as little government as possible in their lives. Alaskans don't need welfare, their own self-determination and Mother Nature provides for all their wants and needs. Joe Miller declared that he would take a stand against earmarks, pork, and the way Washington works.

After the primary, Alaskans woke up to the hangover of reality, showed their true colors, and stabbed Miller in the back. Miller won the GOP primary, but rather than retire from the field gracefully, Lisa Murkoski mounted a furious write-in campaign to continue to hold the seat to which her father appointed her. There were no Sharron Angle or Christine O’Donnell gaffs and bizarre statements from Miller; rather, Murkowski simply appealed to Alaskans true nature as federal government moochers, and Alaskans gladly acquiesced.

Despite the image, all Alaskans depend on welfare. With a population of less than 700,000, Alaska received by far the biggest per-capita chunk of federal stimulus spending. All told, Alaskans receive 8 dollars for every dollar they pay in federal taxes. If you thought getting a one-time $500 dollar check from the IRS was nice, try the at least $1600 tax free, per family member-not just tax payer- that Alaskans are guaranteed by Uncle Sam each year. Additionally, Alaska receives enormous sums from the federal government to maintain two huge military bases just outside of Anchorage just to keep many Alaskans employed and directly tied to federal dollars.

Native Alaskans don't just live in small villages preserving their noble way of life; they control huge native corporations that depend entirely on federal contracts, including missile testing, an all-inclusive "natives only" hospital, and general aid packages. At the same time, they do not pay federal taxes due to their native status.

And, in case you didn't know, Alaska also has the highest amount of millionaires per capita. A poor rough in tumble folk, Alaskans generally aren’t.

Lisa Murkowski had to spend millions of dollars and doled out hundreds of promises that could eventually cost American taxpayers billions to retain her Senate seat. She reminded Alaskans of how much they needed the federal government to subsidize their Alaskan “independence”. Now, she is upset because Republicans are prepared to pass earmark reform. Fortunately for America, most Republicans listened to the People's cries for financial responsibility. Good news for America, bad news to the moocher state of Alaska.