3-D Chess: It Only Looks Like Trump Is Throwing Away His Presidency!

Ann Coulter
|
Posted: Mar 28, 2018 5:15 PM
Share   Tweet
The opinions expressed by columnists are their own and do not necessarily represent the views of Townhall.com. 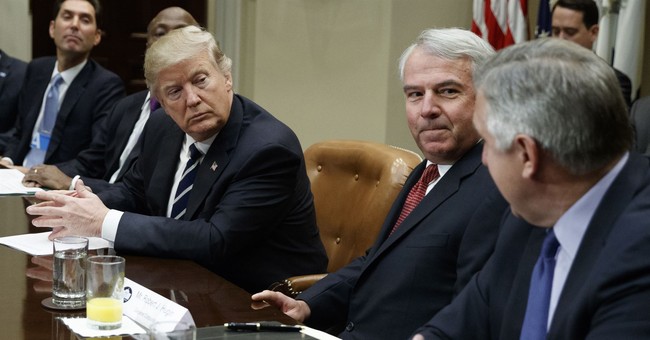 You see, it only looks like Trump is The Worst Negotiator God Ever Created. Instead of telling Democrats, "I won't even talk about DACA until we have the border wall," Trump has repeatedly given up the wall, aka The Central Promise of His Campaign, Without Which He Would Not Be in the White House.

He has now signed a spending bill that, if it actually did what it claims to do, prohibits him from building the wall, hiring any new ICE agents capable of making arrests, and building any new detention facilities for illegal aliens.

The strange thing is, as commander in chief, he doesn't need congressional authority to do any of these things. But he obviously doesn't know that.

Why? BECAUSE HE'S PLAYING 3-D CHESS!

Instead of making even a fake effort and forcing Democrats to get up off the couch to vote against the wall, Trump cleverly leapt to the front of the anti-Trump parade and pretended it was all his idea.

I told Sen. Schumer: I WANT AMNESTY! I was very clear! Look at him, running around like a loser doing my bidding.

Trump's main response to a bill that actively prohibits him from keeping his central campaign promise was to denounce Congress for not sending him a bill legalizing "Dreamers." Which also breaks a campaign promise.

It's all part of the act, you fools! Trump is making the Democrats think that, even though they don't have the House, the Senate or the White House, he needs Chuck Schumer's permission before moving a muscle.

Carefully observe the master. He gives up everything and — in exchange — gets NOTHING. See?

The easy thing to do would be to say, There's no way any amnesty happens until the wall is complete. Anybody could do that. But we didn't elect just anybody.

We elected the guy whose name is on the cover of "The Art of the Deal." Sure, he didn't write it -- and probably didn't read it -- but Trump must have heard about some of the trite advice it contains.

This shows what a master strategist Trump is. He throws out the rulebook! You know what else, suckers? Now he can put out a paperback edition with a new chapter, How to Give Up Everything in Return for Nothing.

The wins are already rolling in. Guess who's suddenly dying to negotiate with Trump? That's right: Kim Jong Un. One look at how Trump negotiates and Kim couldn’t wait to sit down with him.

Trump took office with the most precious gift any president could ever ask for: winning the White House with ZERO support from Wall Street. But instead of calling in the big banks and saying, Welcome to hell! Trump checkmated them by spending his first 15 months in office cravenly begging for their approval.

The expression "dance with the one who brung you" is old paradigm thinking. This is Trump Thinking.

The Republican Brain Trust sneered at Trump throughout the 2016 campaign, certain that they were in no danger from this ridiculous creature.

And damned if he didn't win.

After that, Trump could have summoned Mitch McConnell and Paul Ryan to the Oval Office and demanded that they show him their testicles. Instead, he became their water boy.

Doing Sen. McConnell's bidding, he endorsed Luther Strange in Alabama, instead of the Trumpian candidate, Mo Brooks. That resulted in a gigantically embarrassing loss, so, naturally, he continued to do whatever McConnell said.

Following the McConnell/Ryan playbook, Trump cut taxes (which is vitally important to Americans who don't have jobs and whose communities are overrun with heroin) and expanded the bloated, wasteful defense budget. (The permanent-war wing of the GOP LOVES him now!)

Thanks to Trump's 3-D chess, he may well be in line for an endorsement not only from Boeing, but also from the powerhouse Bush family.

When a Republican House and Republican Senate deliver a spending bill to Trump that prevents him from putting so much as a rickety fence on more than 33 miles of the border, I think it's safe to say that not only do congressional Republicans not fear Trump, they're laughing at him.

Obviously, a blue wave this fall is much more likely now. That's the plan, morons.

Just wait and see how they like it when the GOP gets wiped out in the midterms. Sure, we'll get all the heinous PC policies we would have gotten under Hillary. But Trump is thinking three moves ahead. He could make history by being only the thirdpresident ever impeached.

Only a chump would complain about Trump cheerfully doing a 180 on everything he campaigned for. If Trump voters are upset, it's on them, not on him.

I was there! At every single rally during the campaign, Trump would whip the crowd into a frenzy over the wall, deporting illegals and no more "stupid wars" -- but he was always VERY careful to end his speeches by saying:

Unless, of course, anyone who represents conventional Republican thinking disagrees, in which case, I will do none of this.

I can't wait to see what comes next!

Just hang on to your hats, because while you're all playing checkers, Trump is playing 3-D chess.

(NOTE: If I am wrong and President Trump ever builds the wall, I will apologize profusely, return to calling him "the Emperor God" and throw a fabulous party at the grand opening of the completed wall.)