Give Me Your Dreamers...

Ann Coulter
|
Posted: Mar 21, 2018 5:00 PM
Share   Tweet
The opinions expressed by columnists are their own and do not necessarily represent the views of Townhall.com. 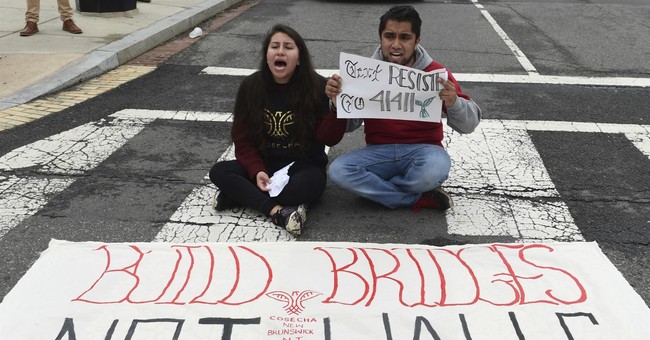 We've been lectured by Mark Zuckerberg about how much better "Dreamers" are than you lazy Americans -- especially African-Americans, whose jobs are disproportionately taken by illegals. (As former Mexican President Vicente Fox once charmingly put it, illegal immigrants "are doing jobs that not even blacks want to do there in the United States.")

So why aren't we being bombarded with television interviews and profiles of these amazing human beings?

Liberals can't make an argument without producing a victim. Attack the media -- they bleat about journalists getting shot in the face while reporting abroad. Complain about FBI corruption -- they choke up over G-men putting their lives on the line EVERY DAY! Denounce the Deep State -- they moan that CIA officers have been killed in the line of duty.

Isn't this the moment for our hearts to be breaking over the millions of wonderful "Dreamers" who will suffer unless we amnesty them immediately?

Let's see 'em! Surely they've got a few Einsteins! After all, the media are capable of turning a gang-admiring thug who forcibly robbed a convenience store and assaulted a cop into "Gentle giant, Mike Brown." They turned jewelry-stealing juvenile delinquent Trayvon Martin into an altar boy.

But even MSNBC dare not show us Trump's beloved "Dreamers." The snarling Muslim showcased by the Democrats at their 2016 convention has gotten more airtime than any "Dreamer."

There are plenty of vague descriptions of "Dreamers," all of whom seem to be valedictorians. But can anyone identify precisely what they have contributed to our country -- other than lots of police work, welfare and protests?

The best "Dreamers" always sound like the "honor student" in Tom Wolfe's Bonfire of the Vanities: "somebody who attends class, isn't disruptive, tries to learn, and does all right at reading and arithmetic."

How about MSNBC interview five new "Dreamers" every night? Five non-hateful ones are probably the most they could get.

As long as Trump is going to keep babbling about these "absolutely incredible kids" -- "I love these kids!" -- and obstinately refuse to deport them, he must have met thousands of them. He plans to amnesty millions.

Why doesn't Trump showcase his favorite two dozen "Dreamers"? Let the rest of us decide how “incredible” they are.

But no Glamour magazine profiles, please! We want to know everything, e.g.: How much have they cost the taxpayers in free school lunches and medical care? How many anchor babies have they had? What percentage have been convicted of a felony or killed someone in a drunk driving accident? How many have been admitted to college by taking affirmative action spots intended for the descendants of American slaves?

In 2009, The New York Times' Lawrence Downes gushed over illegal alien Benita Veliz. Three years later, liberals still hadn't come up with a better one: In 2012, she was the featured illegal alien at the Democratic National Convention. (It only seems like the Democrats have an illegal alien speak at all their conventions. Veliz was the first.)

Downes ticked off Veliz's "impressive" accomplishments: "She was valedictorian at Jefferson High School" -- naturally! -- "graduating at age 16. She went to St. Mary's University in San Antonio on a full scholarship." (A scholarship, I note, that otherwise might have gone to a yucky American.)

I gather Veliz is the left's designated baby seal of "Dreamers."

Veliz is probably a nice lady, but she was valedictorian at a school that Downes would never send his kids to. Jefferson High School is 98 percent minority, less than half the students are "English proficient," and only 16 percent are ready for college.

HOW DID AMERICA EVER GET BY WITHOUT HER?

Or to use Downes' more-relaxed standard: "How will this country be a better place once we force Benita Veliz to leave it?"

Off the top of my head: There would be less strain on education budgets, hospital emergency rooms, roads and bridges, and that college scholarship Veliz got would be open to an American kid.

This is a country built by Western Europeans. Immigrants arrived after it was already set up and running well. The idea that any immigrant who hasn't committed a felony is someone we can't live without is absurd.

If you're a yuppie in a rich white area and don't like cleaning your toilets, the Trump administration has been great for you. But if you're a Trump voter, you're scratching your head wondering what happened to those campaign promises that set him apart from every other Republican.