Did Anyone Talking About Trump's Speech Actually Hear It?

Ann Coulter
|
Posted: Jun 15, 2016 6:17 PM
Share   Tweet
The opinions expressed by columnists are their own and do not necessarily represent the views of Townhall.com. 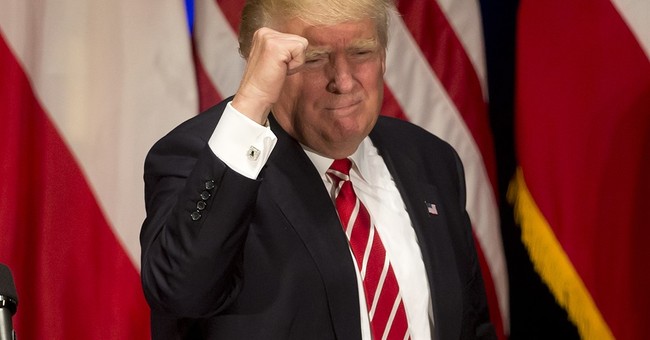 The media have lost their minds after Trump's magnificent speech on Monday. It's all hands on deck, no attack is too extreme. Their main point is: DO NOT LOOK AT THAT SPEECH. It has "words that wound." Much too dangerous even to read it.

Instead of reporting what Trump said, the media give us the "gist" of it (in the sense of an unrecognizable distortion). It was awful, Hitlerian, beneath our dignity as a nation. They lie about what he said and then attack their own lies as if they're attacking Trump.

The Washington Post's headline, which got their reporters banned from Trump's press briefings, was: "Donald Trump Seems to Connect President Obama to the Orlando Shooting."

I guess OK, You're Right, didn't sound professional, so the Post pretended not to understand Trump's speech, at all. We can't makes heads or tails of it, but he seems to be saying ...

One thing Trump is not, is unclear.

Contrary to the Post's headline suggesting that Trump had posited some crazy theory about Obama secretly meeting with Omar Mateen to plot the attack -- No, this gun is much better for a mass shooting, Omar -- Trump criticized the Obama administration policies that are not keeping us safe. (It's completely unprecedented to respond to a mass murder by criticizing the policies that allowed it to happen!)

How about: Washington Post seems to Connect President Bush to Abu Ghraib

Washington Post, May 26, 2006: "Bush has ... addressed Abu Ghraib the same way he did last night: Expressing regret without responsibility."

Or: Democrats Seem to Connect President Bush to Anti-Americanism in Muslim World

Washington Post, May 20, 2005: "It is certainly true that the Bush administration, at Guantanamo and at Abu Ghraib, is responsible for a good deal of anti-Americanism in the Muslim world."

Washington Post, April 5, 2006: "How much was President Bush personally responsible for taking the country to war under false pretenses, or for the botched response to Hurricane Katrina? To hear the White House tell it, it wasn't really his fault."

In his speech, Trump said:

"The killer was an Afghan, of Afghan parents, who immigrated to the United States. His father published support for the Afghan Taliban, a regime which murders those who don't share its radical views. The father even said he was running for president of that country.

"The bottom line is that the only reason the killer was in America in the first place was because we allowed his family to come here.

"That is a fact, and it's a fact we need to talk about.

Immediately after Trump's speech, MSNBC's Katie Tur "fact-checked" Trump, announcing that he had incorrectly said Omar was "born in Afghan."

What did Tur think this meant? "Afghan" isn't a country. Didn't she pause for a moment and realize that what she thought he said makes no sense? Journalists with their outsized sense of importance say, No, no, that's not what I heard. It says in my notes right here, you said, "blue carrots for Eisenhower." I stand by my notes.

Obviously, what Trump said was that Omar was "born an Afghan." Which he was.

The media began indignantly informing us that Trump was wrong because -- as The Washington Post put it: "The shooter was born in Queens to parents who emigrated from Afghanistan."

This can lead to confusion. After the Post snippily corrected Trump on Omar not being an "Afghan" on Monday, on Tuesday, the Post admitted he was. Headline: "Orlando gunman said he carried out attack to get 'Americans to stop bombing his country,' witness says."

The Atlantic's Ron Fournier, Dispenser of Conventional Liberal Opinion, wrote an article on Trump's speech titled "A Victory Lap in Blood" that would make any social justice warrior proud.

Like the rest of the media's reviews of a speech they apparently didn't read, there were no quotes from Trump's speech. Instead, Fournier ran through a string of accusations, SJW-style: "You didn't call it," "You are helping ISIS recruit terrorists," "You are dividing Americans ..."

Trump never claimed he "called it," but, if he ever does, Fournier has a fantastic takedown:

"You didn't warn that an American man named Omar Mateen, a well-educated security guard investigated by the FBI for suspected ties to terrorism, would legally purchase a weapon made for warfare and use it to slaughter 49 people at a popular gay nightclub."

Hillary Clinton is presidential because she wants to dramatically increase the number of unvetted Syrian refugees we bring in. But Trump is an embarrassment because he doesn't have superhuman powers to know that a "man named Omar Mateen" would attack an Orlando nightclub.

Fournier repeated the fake fact currently sweeping the nation about Trump thinking he deserves congratulations, writing, "Donald Trump wants a pat on the back."

But then Fournier made the fatal mistake of quoting Trump's tweet allegedly saying this: "Appreciate the congrats for being right on radical Islamic terrorism, I don't want congrats, I want toughness & vigilance. We must be smart!"

Fournier's "Trump wants a pat on the back" was 12 words away from Trump saying, "I don't want congrats." Even the most bored reader is probably going to make it that far.

Now you see why reporters aren't quoting Trump and have to hope you won't read the speech for yourself.