Liberals Give 'Til It Hurts (You) 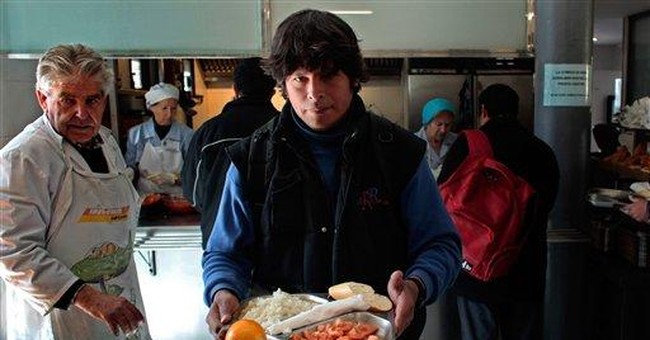 Liberals never tire of discussing their own generosity, particularly when demanding that the government take your money by force to fund shiftless government employees overseeing counterproductive government programs.

This week, we'll take a peek at the charitable giving of these champions of the poor.

The Obamas' charitable giving is equally divided between "hope" and "change."

George W. Bush gave away more than 10 percent of his income each year he was president, as he did before becoming president.

In the decade before Joe Biden became vice president, the Bidens gave a total -- all 10 years combined -- of $3,690 to charity, or 0.2 percent of their income. They gave in a decade what most Americans in their tax bracket give in an average year, or about one row of hair plugs.

Of course, even in Biden's stingiest years, he gave more to charity than Sen. John Kerry did in 1995, which was a big fat goose egg. Kerry did, however, spend half a million dollars on a 17th-century Dutch seascape painting that year, as Peter Schweizer reports in his 2008 book, "Makers and Takers."

He also dropped a $5 bill in the Salvation Army pail and almost didn't ask for change.

When Sen. Ted Kennedy released his tax returns to run for president in the '70s, they showed that Kennedy gave a bare 1 percent of his income to charity -- or, as Schweizer says, "about as much as Kennedy claimed as a write-off on his 50-foot sailing sloop Curragh." (Cash tips to bartenders and cocktail waitresses are not considered charitable donations.)

The Democratic base gives to charity as their betters do. At the same income, a single mother on welfare is seven times less likely to give to charity than a working poor family that attends religious services.

In 2005, Vice President Cheney gave 77 percent of his income to charity. He also shot a lawyer in the face, which I think should count for something.

In a single year, Schweizer reports, Rush Limbaugh "gave $109,716 to 'various individuals in need of assistance mainly due to family illnesses,' $52,898 to 'children's case management organizations,' including 'various programs to benefit families in need,' $35,100 for 'Alzheimer's community care -- day care for families in need,' and $40,951 for air conditioning units and heaters delivered to troops in Iraq."

(Rush also once gave $50 to Maxine Waters after mistaking her for a homeless person.)

The only way to pry a liberal from his money is to hold tickertape parades for him, allowing him to boast about his charity in magazines and on TV.

Isn't that what Jesus instructed in the Sermon on the Mount?

In my Bible, that passage is illustrated with a photo of Bill Gates and Warren Buffett.

At least the hypocrites in the Bible, Redmond, Wash., and Omaha, Neb., who incessantly brag about their charity actually do pony up the money.

Elected Democrats crow about how much they love the poor by demanding overburdened taxpayers fund government redistribution schemes, but can never seem to open their own wallets.

The only evidence we have that Democrats love the poor is that they consistently back policies that will create more of them.