Alvin Greene: The Most Qualified Democrat I've Ever Seen 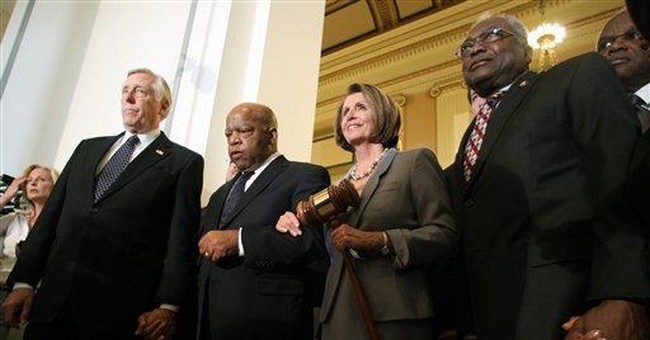 Democrats have decided that Alvin Greene's surprise victory in the South Carolina Democratic senatorial primary must be the result of a Republican dirty trick.

Greene beat Vic Rawl, a former state representative and judge, with a whopping 60 percent of the vote in last Tuesday's primary, despite Greene's having no job, no house, no campaign website, no campaign headquarters -- indeed, no campaign. Other than paying the $10,000 filing fee, Greene seems to have put no effort into the race whatsoever.

But he does have one thing Rawl doesn't have: In the grand tradition of legendary Democrats such as Teddy Kennedy, Greene has a felony arrest. (Greene's inexperience really shows here: Democrats usually wait until after they're elected to show pornography to college girls.)

So this is not good for the Democrats. Naturally, therefore, they're blaming Republicans.

Rep. James Clyburn, D-S.C., has demanded that the U.S. attorney investigate, ominously suggesting that Greene may be a Republican plant. Clyburn is the third-ranking Democrat in the House.

MSNBC's Keith Olbermann interviewed Greene as if he had Lee Harvey Oswald in the dock. Chris Matthews asked guests: "Do you think this has the look of a dirty trick -- sort of a Watergate number?" Watergate, you'll recall, involved the Nixon White House trying to persuade a mildly retarded black man to run for the Senate.

Obama senior adviser David Axelrod said Greene was not a "legitimate" candidate and called his victory "a mysterious deal." (Yes, how could a young African-American man with strange origins, suspicious funding, shady associations, no experience, no qualifications, and no demonstrable work history come out of nowhere and win an election?)

They're hopping mad, these liberals, but it's not clear what their theory of the crime is. Before accusing Republicans of committing a dirty trick, apparently no one asked the question: "OK, but what was the trick?"

The key to Greene's victory, you see, is that he got more votes. How do liberals imagine Republicans pulled that off? Mesmerize the Democrats into voting for an idiot? If they could do that, John McCain would be president.

There is zero possibility that Republicans skipped their own primary to vote for Greene in the Democratic primary. The marquee South Carolina election in last Tuesday's primary was the four-candidate, mudslinging Republican gubernatorial primary. That one was so heated, it's still to be decided in a runoff next week.

Even Sarah Palin got involved in the race, endorsing Nikki Haley (though not endorsing anyone in the Nevada primary, as I incorrectly gave her credit for in last week's column).

Perhaps realizing this, liberal loons (Keith Olbermann) are now pushing the theory that Republicans somehow ... rigged the voting machines! (This is what happens when you know absolutely nothing about politics but are given a TV show.)

I promise you, if Republicans could have rigged any voting machines, they would have made sure Nikki Haley won by 51 percent, instead of 49 percent, to avoid next week's runoff.

The only thing a Republican could possibly have done is pay Greene's filing fee. It's likely that someone paid his filing fee, inasmuch as Greene doesn't appear to have enough money to buy a sandwich.

But anyone could have paid it -- ACORN, a community organizer, a stimulus grantor, Betty White. If a Republican paid the $10,000 filing fee, why not give Greene another hundred bucks for a campaign website? Or how about making it $150, so Greene could buy a new suit?

But, for the sake of argument, let's say a Republican paid Greene's filing fee. Even the worst-case scenario is still not half as bad as what liberals did to Sen. Patrick Leahy's Republican opponent in 1998. To the delight of the media, liberals ran a simpleton dairy farmer, Fred Tuttle, in the Republican primary that year against a millionaire lawyer, Jack McMullen.

And as with Greene, Tuttle was a feeble-minded everyman. He had starred in a movie, "Man With a Plan," made by his Harvard-graduate neighbor, about a cornball farmer who runs for Congress. Having "Fred" actually run for the Senate was openly described as a publicity stunt.

The media lavished praise on the "gentlemanly" Senate race, with The Associated Press calling it a "calm, folksy Senate campaign." Reporters think there's too much "mudslinging" when the Republican candidate doesn't immediately endorse the Democrat.

The movie starring Fred was run on PBS, sponsored by Ben & Jerry's ice cream, and Fred -- the winsome simpleton -- was fawned over throughout the media. (CBS' Bill Geist to Tuttle: "Are you a sex symbol?")

That's a far cry from how reporters are treating poor Alvin Greene:

CNN anchor Don Lemon: You're mentally sound, physically sound? You're not impaired by anything at this moment?

Lemon: No, just what?

Lemon: Quite honestly, you don't sound OK. Are you impaired by anything right now?

I suppose you could say the Republican primary in Vermont was irrelevant anyway since Sen. Leahy was a shoo-in for re-election.

And Alvin Greene is clearly more qualified to be a senator than Patrick Leahy.