I'll Pass on "Opting Out" 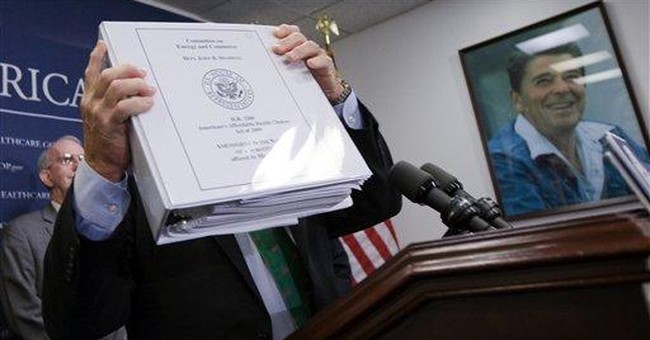 The Democrats' all-new "opt out" idea for health care reform is the latest fig leaf for a total government takeover of the health care system.

Democrats tell us they've been trying to nationalize health care for 65 years, but the first anyone heard of the "opt out" provision was about a week ago. They keep changing the language so people can't figure out what's going on.

The most important fact about the "opt out" scheme allegedly allowing states to decline government health insurance is that a state can't "opt out" of paying for it. All 50 states will pay for it. A state legislature can only opt out of allowing its own citizens to receive the benefits of a federal program they're paying for.

It's like a movie theater offering a "money back guarantee" and then explaining, you don't get your money back, but you don't have to stay and watch the movie if you don't like it. That's not what most people are thinking when they hear the words "opt out." The term more likely to come to mind is "scam."

While congressional Democrats act indignant that Republicans would intransigently oppose a national health care plan that now magnanimously allows states to "opt out," other liberals are being cockily honest about the "opt out" scheme.

On The Huffington Post, the first sentence of the article on the opt-out plan is: "The public option lives."

Andrew Sullivan gloats on his blog, "Imagine Republicans in state legislatures having to argue and posture against an affordable health insurance plan for the folks, as O'Reilly calls them, while evil liberals provide it elsewhere."

But the only reason government health insurance will be more "affordable" than private health insurance is that taxpayers will be footing the bill. That's something that can't be opted out of under the "opt out" plan.

So, naturally, liberals aren't sure. In Democratic circles, the jury's still out on free market economics. It's not settled science like global warming or Darwinian evolution. But in the meantime, they'd like to spend trillions of dollars to remake our entire health care system on a European socialist model.

Sometimes the evidence for the superiority of the free market is hidden in liberals' own obtuse reporting.

In the past few years, The New York Times has indignantly reported that doctors' appointments for Botox can be obtained much faster than appointments to check on possibly cancerous moles. The paper's entire editorial staff was enraged by this preferential treatment for Botox patients, with the exception of a strangely silent Maureen Dowd.

As the Times reported: "In some dermatologists' offices, freer-spending cosmetic patients are given appointments more quickly than medical patients for whom health insurance pays fixed reimbursement fees."

As the kids say: Duh.

This is the problem with all third-party payor systems -- which is already the main problem with health care in America and will become inescapable under universal health care.

Not only do the free-market segments of medicine produce faster appointments and shorter waiting lines, but they also produce more innovation and price drops. Blindly pursuing profits, other companies are working overtime to produce cheaper, better alternatives to Botox. The war on wrinkles is proceeding faster than the war on cancer, declared by President Nixon in 1971.

The reason you can't buy health insurance as easily and cheaply as you can buy car insurance -- or a million other products and services available on the free market -- is that during World War II, FDR imposed wage and price controls. Employers couldn't bid for employees with higher wages, so they bid for them by adding health insurance to the overall compensation package.

Employers were writing off their employee insurance plans as a business expense, but when the IRS caught on to what employers were doing, they tried to tax employer-provided health insurance as wages. But, by then, workers liked their "free" health insurance, voters rebelled, and the IRS backed down.

So now, employer-provided health insurance is subsidized not only by the employees themselves through lower wages and salaries, but also by all taxpayers who have to make up the difference for this massive tax deduction.

How many people are stuck in jobs they hate and aren't good at, rather than going out and doing something useful, because they need the health insurance from their employers? I'm not just talking about MSNBC anchors -- I mean throughout the entire economy.

Almost everything wrong with our health care system comes from government interference with the free market. If the health care system is broken, then fix it. Don't try to invent a new one premised on all the bad ideas that are causing problems in the first place.