This Is the Downer We've Been Waiting For! 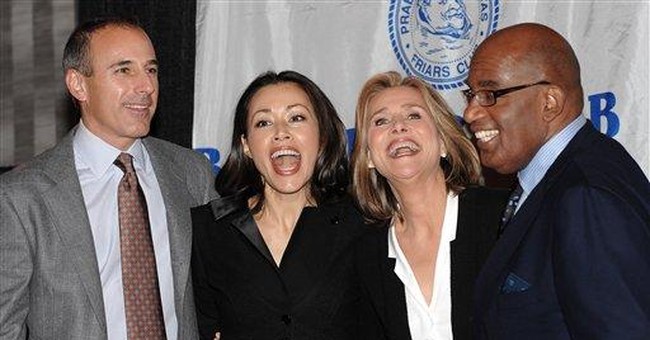 After NBC canceled me "for life" on Monday -- until seven or eight hours later when the ban was splashed across the top of The Drudge Report, forcing a red-faced NBC to withdraw the ban -- an NBC insider told The Drudge Report: "We are just not interested in anyone so highly critical of President-elect Obama, right now," explaining that "it's such a downer. It's just not the time, and it's not what our audience wants, either."

In point of fact, I'm not particularly critical of Obama in my new book. I'm critical of the media for behaving like a protection racket for Obama rather than the constitutionally protected guardians of our liberty that they claim to be. So I think what the NBC insider meant to say is that NBC is not interested in anyone so highly critical of NBC right now. It's such a downer, it's just not the time, and it's not what their audience wants right now, either.

In fact, I think my book is the downer America has been waiting for! So herewith, I present an excerpt from the smash new book out this week, Guilty: Liberal Victims and Their Assault on America:

When the Obama family materialized, the media was seized by a mass psychosis that hadn't been witnessed since Beatlemania. OK! magazine raved that the Obamas "are such an all-American family that they almost make the Brady Bunch look dysfunctional." Yes, who can forget the madcap episode when the Bradys' wacky preacher tells them the government created AIDS to kill blacks!

Months before network anchors were interrogating vice presidential candidate Sarah Palin on the intricacies of foreign policy, here is how NBC's Brian Williams mercilessly grilled presidential candidate Barack Obama: "What was it like for you last night, the part we couldn't see, the flight to St. Paul with your wife, knowing what was awaiting?"

Twisting the knife he had just plunged into Obama, Williams followed up with what has come to be known as a "gotcha" question: "And you had to be thinking of your mother and your father." Sarah Palin was memorizing the last six kings of Swaziland for her media interviews, but Obama only needed to say something nice about his parents to be considered presidential material.

The media's fawning over Obama knew no bounds, and yet, in the midst of the most incredible media conspiracy to turn this jug-eared clodhopper into some combination of Winston Churchill and a young Elvis, you were being a bore if you mentioned the liberal media. Oh surely we've exploded that old chestnut. ... Look! Look, Obama just lit up another Marlboro! Geez, does smoking make you look cool, or what! Yeah, Obama!.

The claim that there's no such thing as a left wing press is a patent lie said to enrage conservatives. Newspapers read like the press under Kim Jung Il, which, outside of a police state, looks foolish. The prose is straight out of The Daily Worker, full of triumphal rhetoric with implicit exclamation points. Still, their chanted slogans fill your brain, like one of those bad songs you can't stop humming.

There is no other explanation for the embarrassing paeans to Obama's "eloquence." His speeches were a run-on string of embarrassing, sophomoric Hallmark card bromides. It seemed only a matter of time before Obama would slip and tell a crowd what a special Dad it had always been to him.

The major theme of Obama's campaign was the audacity of his running for president. He titled his keynote address at the 2004 Democratic National Convention, "The Audacity of Hope" –- named after a sermon given by his spiritual mentor Jeremiah Wright, whom we were not allowed to mention without being accused of playing dirty tricks. (Rejected speech titles from sermons by Rev. Wright included "God Damn America!," "The U.S. of K.K.A." and "The Racist United States of America.")

But the media were giddy over their latest crush. Even when Obama broke a pledge and rejected public financing for his campaign -- an issue more dear to The New York Times than even gay marriage -- the Times led the article on Obama's broken pledge with his excuse. "Citing the specter of attacks from independent groups on the right," the Times article began, "Sen. Barack Obama announced Thursday that he would opt out of the public financing system for the general election."

So he had to break his pledge because he was a victim of the Republican Attack Machine.

When Obama broke his word and voted for the Foreign Intelligence Surveillance Act bill (FISA), the Times' editorial began: We are shocked and dismayed by Sen. Obama's vote on ... oh, who are we kidding? We can't stay mad at this guy! Isn't he just adorable? Couldn't you just eat him up with a spoon? Is he looking at me? Ohmigod, I think he's looking at me!!!! Couldn't you just die?

It has ever been thus.