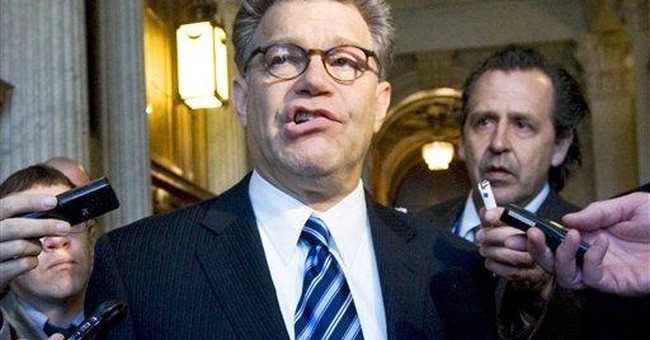 Until now, Minnesota was always famous for its clean elections. Indeed, Democratic consultant Bob Beckel recently attested to the honesty of Minnesota's elections, joking: "Believe me. I've tried. I've tried every way around the system out there, and it doesn't work."

But that was before Minnesota encountered the pushiest, most aggressive, most unscrupulous person who has ever sought public office, Al Franken.

On Election Day, Franken lost the U.S. Senate race in Minnesota to the Republican incumbent Sen. Norm Coleman by 725 votes. But over the next week, Democratic counties keep discovering new votes for Franken and subtracting votes from Coleman, claiming to be correcting "typos."

In all, Franken picked up 459 votes and Coleman lost 60 votes from these alleged "corrections."

As the inestimable economist John Lott pointed out, the "corrections" in the Senate race generated more new votes for Franken than all the votes added by corrections in every race in the entire state -- presidential, congressional, state house, sanitation commissioner and dogcatcher -- combined.

And yet the left-wing, George Soros-backed Secretary of State, Mark Ritchie, stoutly defended the statistically impossible "corrected" votes. There's something fishy going on in Minnesota besides the annual bigmouth bass tournament.

Fortunately, the very outrageousness of the "corrections" scam brought national attention to the Minnesota recount, at which point it became more difficult to keep "finding" votes for Franken. Under the glare of the national media, the steady accretion of post-election ballots for Franken came to a screeching halt, rather like a child who, after being caught red-handed, tactfully removes his hand from the cookie jar.

As Supreme Court Justice Louis Brandeis said, sunlight is the best disinfectant. (Although, having met Franken, I would add that actual disinfectant might not be a bad idea either.)

Since then, the state has been conducting a meticulous hand recount and, despite a suspicious delay from liberal Hennepin County and a suspicious late-vote discovery from liberal Ramsey County, Coleman has consistently held a lead of 200 to 300 votes. (That's not including the 519 votes that were stolen -- or "corrected" -- from Coleman immediately after the election when no one was paying attention.)

As of Wednesday, with 93 percent of the votes recounted, Coleman holds a 295-vote lead. At no point since the first count after the election has Franken been ahead.

The famously honest people of Minnesota probably think this means the recount is almost over. But like a bad Al Franken sketch on "Saturday Night Live," I predict this recount will keep going on and on and on for no apparent reason.

To understand what is happening in Minnesota, one must turn to the Washington state gubernatorial election of 2004.

As in Minnesota this year, the Republican candidate kept winning and winning, but the Democrats refused to concede, instead demanding endless recounts. Meanwhile, Democratic precincts kept "discovering" new ballots for the Democrat, Chris Gregoire.

Nonetheless, after a full recount, Rossi was still ahead, but this time by only 42 votes.

So the Democrats demanded a third recount -- and King County continued its miraculous ballot-"finding" trick, which continued to favor Gregoire.

It's hard to avoid the conclusion that Democrat election officials were "finding" new votes as much as they needed to find new votes. Here are 10,000 new votes. You need more? OK, back to work!

Eventually, King County found enough provisional and absentee ballots to put Democrat Gregoire in the lead -- and this result was immediately certified by the weenie Republican secretary of state.

Republicans are always accused of being sharks; I wish they'd rise to the level of minnows.

According to Michael Barone, an examination of King County records showed that nearly 2,000 more mail-in ballots had been "cast" in King County than had been requested.

But Gregoire got to be governor -- having done unusually well among the imaginary voters of King County.

Also, you will notice that Franken is obsessively fixated on the absentee ballots, a specialty of the vote fraud experts at ACORN. Inasmuch as only 5 percent of absentee ballots were rejected in Minnesota, Franken already has fraud baked into the cake. But he needs more.

Franken can pretend to be generous -- by not demanding that all rejected absentee ballots be counted -- while in fact being manipulative -- by requesting that only the ballots with votes for him be counted. That's exactly what the Democrats -- led by Franken adviser Berendt -- did to steal the 2004 election in Washington state.

But first, Franken will need the names. Then he can check voter registration lists, ask around or, in a really aggressive move, call the rejected voters directly and bully them into admitting who they voted for. If they say "Coleman," I promise you they won't get a call back to ensure that "every vote is counted."

There is absolutely no other reason to get the names of those whose ballots were rejected.

We'll find out in the next few weeks if Barack Obama's "new politics of hope and change" includes turning the cleanest state in the union into one of the dirtiest.