Andy Surabian
|
Posted: Jun 09, 2018 12:01 AM
Share   Tweet
The opinions expressed by columnists are their own and do not necessarily represent the views of Townhall.com. 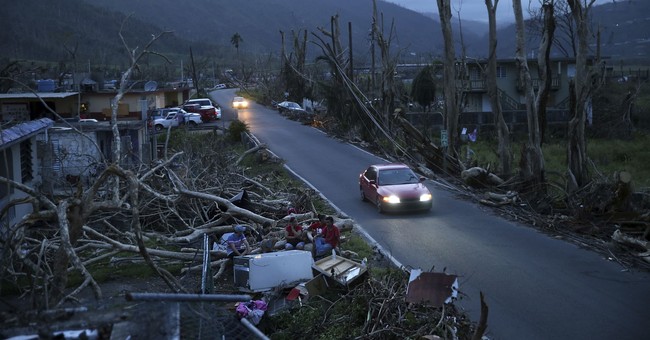 Last week’s release of the Harvard study revealing the death toll from Hurricane Maria – a number more than 70 times the official Puerto Rican government estimate – is as shocking as it is absolutely deeply disturbing.

This weekend provided a memorial to the lives lost at the steps of the capital building in San Juan with over 4,645 pairs of shoes representing each life lost.

A report by Harvard recently concluded that “the official death count of 64 is a substantial underestimate of the true burden of mortality after Hurricane Maria,” advising that, “As the United States prepares for its next hurricane season, it will be critical to review how disaster-related deaths will be counted, in order to mobilize an appropriate response operation and account for the fate of those affected.

Unfortunately, Democrats have been quick to politicize the tragedy and unfairly blame President Trump’s response to Hurricane Maria, as the key determining factor in the high death toll, despite the tens of billions of dollars allocated to the island in the months since the storm. Go figure. Once again, they are trying to play their “Trump card”.

Their strategy to single out President Trump, when the island of Puerto Rico has been a hallmark of bad governance and mismanagement for decades, is best encapsulated in a weak, petty, uneducated tweet from Senator Bob Menendez, a key supporter of Puerto Rican Governor Ricardo Rosselló and foe of President Trump, who wrote, “This new study shows what was clear to all of us who visited Puerto Rico after Hurricane Maria: that this tragedy was of historic proportions, and the Trump Admin's botched response would make it worse.”

Other Democrats – everyone from Hillary Clinton to Nydia Velazquez – have piled on as did the mainstream media including The Washington Post and The New York Times with scathing editorials over the weekend.

These Democrat "resisters" are flat out missing the point and putting future lives at risk by blaming President Trump. The Federal Emergency Management Agency (FEMA) has deployed a robust federal response to the worst natural disaster that has ever hit this country. FEMA workers and the U.S. Army Corps of Engineers (USACE) are still on the ground continuing their efforts to this day.

The thing the Democrats failed to acknowledge was the role Governor Ricardo Rosselló played in the aftermath of the Hurricane and the vast miscalculation of the death toll. Outside of Anderson Cooper’s interview with the governor, which surprisingly raised tough questions, Rosselló has basically shed any and all responsibility he holds for the thousands that died on his watch. He says he “want[s] the truth to come out” and that there will be “hell to pay,” for those responsible for obscuring the truth about the death toll – but he is inherently responsible for this himself.

Rather than take any personal responsibility, Governor Rosselló continues to blame the Trump administration, just his like buddies in Washington, when in reality there is evidence to show that Governor Rosselló did his best to quash the Harvard study author’s attempts to bring new data to light by denying their requests for government data.

If there is one thing that Democrats have said that holds water is that the death toll numbers were “concealed,” as Representative Nydia Velazquez put it. However, it is not President Trump that’s to blame for that – it’s her comrade Ricardo Rosselló.

Sadly, it looks like this shady activity and opaque governance is part of a broader strategy of the Governor. He has systematically attempted to run out the U.S. Army Corps of Engineers in their effort to help rebuild the Island and turned over the rebuild and restoration to local crony contractors formerly associated with the inept and corrupt PREPA. All the while, he expects federal taxpayers to pay for the perpetuation of corrupt practices on the island.

Let’s keep in mind that he is doing this as we begin hurricane season and thousands upon thousands of Puerto Ricans remain without access to electricity.

Billions have been spent by Trump, Congress and federal taxpayers to help Puerto Rico rebuild. While Governor Rosselló has called Trump a “penny pincher” – that couldn't be further from the truth. Instead of lobbing false accusations against the President to save his own hide, maybe it's time for Rosello to take an honest look into the mirror and ask himself if it might be his mismanagement of the Island, which he has helped drive into bankruptcy, that is to blame for Puerto Rico's problems?

Democrats need to stop arbitrarily pointing the finger at President Trump as part of their effort to score cheap political points and take a look at the deep-seeded issues on the island, starting with Governor Rosselló’s poor leadership, in order to Make Puerto Rico Great Again.