End the Spin in the Minimum Wage Debate

Andrew Wilford
|
Posted: Jul 22, 2019 12:35 PM
Share   Tweet
The opinions expressed by columnists are their own and do not necessarily represent the views of Townhall.com. 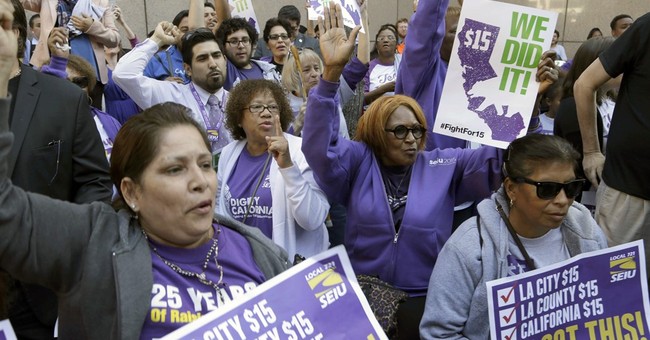 Editor's note: This column was co-authored by Brandon Beyer.

Less than a month into their control of the House, over 190 Democrats co-sponsored the Raise the Wage Act, which would raise the federal minimum wage to $15 an hour in the next five years—more than double the current $7.25 level. While advocates are pointing to a new Congressional Budget Office (CBO) report on the effects of the proposal as vindication, there are too many holes in the proposal and in CBO’s estimate to be taken as gospel. The Raise the Wage Act and other proposals to implement a massive minimum wage hike would in reality contribute to millions of Americans losing their jobs.

Advocates for a $15 per hour minimum wage seized on CBO’s finding that such a hike would boost the wages of 17 million workers currently working below this level and that another 10 million workers could see a boost in their wages. This increase would lead to 1.3 million Americans being lifted above the poverty line. But this is like evaluating the health impacts of chocolate cake only by measuring how much it satisfies a sugar craving. Mandating an increase in the minimum hourly wage would, yes, cause some Americans to see higher earnings.

However, just like chocolate cake has negative health impacts, a minimum wage hike has significant drawbacks. The concern raised by opponents of a drastic minimum wage increase is that it would lead to other workers losing their jobs as employers struggle to handle the increased payroll. And on that count, the CBO’s analysis seems to confirm the worst fears about what a minimum wage increase could mean. The agency warns that an increase to $15 an hour would cause 1.3 million Americans to become unemployed, and that could rise to as high as 3.7 million workers being let go from their jobs over the next five years. These job losses are conveniently ignored by minimum wage hike advocates.

Those supporting a higher minimum wage have also ignored the burden businesses would face to comply with the new mandate. If employers tried to absorb the higher labor costs, their margins would tighten as the cost to pay each employee increases. This increased expense would almost certainly be passed onto consumers through higher prices. This effect would also hit lower- and middle-class families the hardest because it would require them to dedicate a greater share of their paychecks to suddenly more-expensive necessities. The CBO finds that while real family income would increase by $8 billion for those below the poverty line with a minimum wage increase to $15 an hour, it would fall for everyone else by twice that amount.

The CBO’s report shows that raising the minimum wage is not the cure for stagnant wages that advocates believe it to be. This makes sense, as the share of minimum wage workers is small and getting ever smaller. Just 2.1 percent of hourly workers made minimum wage in 2018, a significant drop-off from the 13.4 percent level recorded in 1979 when the Bureau of Labor Statistics started recording the figure.

Instead, increasing wages needs to entail a more comprehensive strategy that looks at more than just a tiny subset of the economy. The recent tax reform legislation represented a good start to this, reducing Uncle Sam’s take from American workers’ paychecks across the board, regardless of income level. It also laid the groundwork for economic growth to grow wages further, as incentives to increase investment, sprinkled throughout the Tax Cuts and Jobs Act, represent the best long-term way to grow wages. Investments increase worker productivity, making each employee’s work more valuable to their business, and thus requiring higher compensation to keep them from seeking an employer more willing to pay them what they’re worth.

Congress can and should pursue further investment incentives to grow the economy. But the CBO’s analysis of a radical minimum wage increase shows what many suspected: while some would see an increase to their wages, millions would lose their jobs. American workers deserve a better prescription to raise their wages than that.