Recognizing The Realities of Trade in 2018

Andrew Langer
|
Posted: Sep 04, 2018 12:45 PM
Share   Tweet
The opinions expressed by columnists are their own and do not necessarily represent the views of Townhall.com. 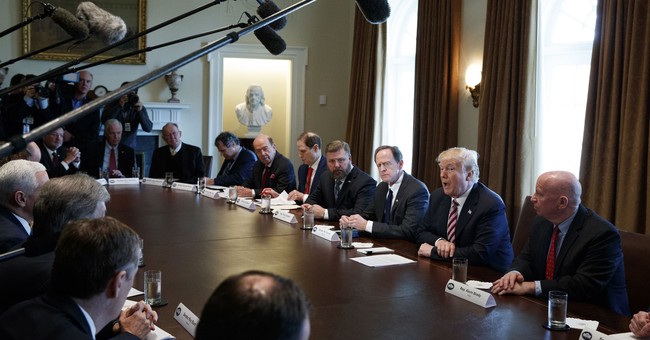 One of the most important outcomes of being in a “disruptive” political cycle is that it allows us to have frank and honest discussions about public policy issues.  Policy isn’t made in a vacuum (or at least it shouldn’t be), and when it comes to economic issues, it’s essential to know precisely where things stand, and how we go to where we are—whether we’re talking about regulatory issues, labor issues, or America’s trade policy.

When it comes to trade policy, this discussion has been, at turns, uncomfortable, as even the most-ardent free-marketeers (like me) have to confront the reality of ongoing, long-term, and systemic trade disparities faced by the United States.  As the Trump administration grapples with America’s trading posture, we cannot dupe ourselves into thinking that before the Trump Team took office, the nation was trading freely or that other nations weren’t seriously taking advantage of a United States willing to cut just about any deal (an especially dangerous position during an eight-year administration that didn’t believe in putting America first).

Such a posture essentially sends up the white flag—enabling our global competitors to engage in all manner of market distortion: enacting systems of trade barriers and subsidies designed to essentially destroy the widest variety of US industries.

It’s why the administration has taken such a strong posture on trade—since long before Trump took office (and in no small measure why he was elected to office).  The US is no longer just talking tough when it comes to trade—it is putting action behind its words, and letting those competitors know that we are always willing to walk away from the table rather than just meekly accepting a bad deal for the sake of accepting a deal.

Understandably, this makes many free-traders and international relations experts uncomfortable.  The United States has rarely engaged in tough talk, internationally (at least when it comes to economics). But this is why the frank discussion is so important—since, ultimately, public policy experts have to agree that results are what is most-important.

Consider the global sugar marketplace.  It’s a tumultuous market—massively distorted by the fact that every other nation on Earth subsidizes sugar production (resulting in a staggering 75% of sugar being kept from trading in the marketplace).   Brazil, spending billions in subsidies to its sugar program, controls 50% of the marketplace as a result!

The US, in contrast, has taken a different approach to sugar.  Ours is not a subsidy program, but a loan program—ultimately not costing the US taxpayers money. It’s a thoughtful, market-based approach, that creates stability while making subsidization entirely unnecessary.  And our farmers pay back their loans… with interest.

As we debate long-term agricultural policy in America and how those policies are impacted by our trade posture, we have to recognize these realities, most-importantly that we do not enter this examination on a level playing field with our competitors.  Because of this, we must not be afraid to call out these realities.   Were we to just destroy our ongoing sugar policies without doing anything to level a vastly uneven playing field, it would be an unmitigated disaster for the United States—killing tens of thousands of jobs, hurting state economies, and US consumers.

We need to take heed of what happened to Hawaii’s sugar farmers.  They were devastated when Mexico flooded the global marketplace with massively subsidized sugar!

The level playing field is essential.  Now that we are getting our regulatory and tax systems reformed, our agricultural sector can better compete on the global stage.   And were that playing field level now, America wouldn’t need a sugar policy at all!

But it isn’t level—which is why unilateral trade disarmament on the part of the United States would be massively foolhardy.  It would essentially be a repetition of many of the policies that have come before, trade policies that appear to be free-market, but seem to completely ignore the incredible disparities that currently exist.  In a truly free-market, nobody wants tariffs (or any other mechanisms of protectionism, for that matter).  But the global agricultural trade marketplace isn’t a free market, but a distorted one.

It’s why policies like the one advocated by Rep. Ted Yoho (R-FL) are so important.  Yoho’s concept, otherwise known as “Zero for Zero” was prescient in terms of encapsulating the concerns many have regarding trade disparities, long before Donald Trump even announced his presidential campaign in the Summer of 2015, and, in that announcement, talked about the very issues Zero for Zero is predicted upon.

Zero for Zero is the kind of rational, common-sense policy concept that the Administration is working through when it comes to trade: the idea that we do not eliminate our longstanding practices that protect American businesses until our competitors do the same.  And that when they eliminate theirs, then so shall we.

We have to recognize that there is a reality that underlies our public policies—and that we cannot make policy without taking those realities into account.  Otherwise, it is a form of insanity… doing the same thing over and over and expecting a different result.  We’ve done the same thing for far too long on trade, simply because we blinded ourselves to what other nations were doing.

Zero for Zero is realistic trade policy.  It ensures that when it comes to trade, America puts America first.  And the public’s desire to put America first is precisely what brought us this disruptive political cycle.

Andrew Langer is President of the Institute for Liberty