Patent Trolls and the Stifling of American Innovation 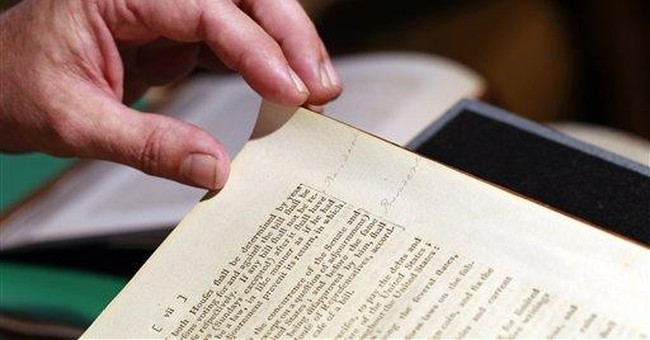 Between the ravages of ObamaCare, excessive government regulation and myriad other instances of executive overreach by the Obama Administration, it’s easy to see why so many consider the United States Constitution to be under assault from many different directions. One threat to the integrity of this foundational document does not come from government, but nonetheless has the potential to weaken a crucial Constitutional goal and stifle American innovation. “Patent trolls” and unscrupulous trial lawyers are taking advantage of a convoluted litigation system to threaten and extort from businesses both large and small, to the detriment of the Founders’ vision. Stopping them must be the next battle in the quest for substantive tort reform.

While most Americans are likely unaware of patent trolls, their nefarious activities affect companies whose goods and services all of us use every day. Trolling firms take advantage of patents with vague or obscure language and threaten other companies with lawsuits over patent infringement, usually on the flimsiest of grounds. Weak claims can turn into big paydays for the patent trolls, however. They usually obtain settlement payments or licensing fees from companies who want to avoid fighting their dubious claims in court and settlement costs average around $1.3 million for a small or medium-sized firm. The cost of going to trial can be even higher, averaging about $1.7 million. Considerably more can be pried from major corporations.

This may explain the trolls’ increasing boldness. Between 2010 and 2014, there were nearly three times as many lawsuits initiated by patent trolls. Last year there were actually more troll-filed lawsuits than there were legitimate patent infringement cases.

Clearly the situation is worsening. Trolls are targeting a variety of industries, with retailers, car companies and financial institutions among their favorite prey. About half of patent trolling victims are small businesses and entrepreneurs, who make for easy targets because many would rather seek a settlement than spend more money in court. And they are targeted by trolls for allegedly violating patents with common practices, such as running a wireless internet router in their store or having their information show up on a search engine map.

I have an intense personal reason for being deeply troubled by this – I do a weekly podcast on politics, policy and society, and podcasters have become a favorite target. Much in the same way that video programming has moved towards time-shifted and on-demand viewership, the same transformation is taking place in the audio world, and patent trolls have targeted a number of podcasters. We do not want to be next!

These trolls are unraveling a key thread in the fabric of the American economy: the drive and ability to innovate. Under the constant threat of predatory litigation, the incentive for businesses to step out of their lane and pursue groundbreaking advances is greatly diminished. This means that instead of pushing boundaries to create new processes, technologies, services and goods that could potentially improve all industries, businesses are more likely to play it safe to avoid lawsuits from anti-progress litigators who only want to make a quick buck for themselves and the patent trolls they represent. The potential for lawsuits has become a private “innovation tax,” hanging over businesses of all sizes.

Even more offensive, patent trolling flies in the face of the Constitution’s stated goal in Article I, Section 8, “To promote the Progress of Science and useful Arts, by securing for limited Times to Authors and Inventors the exclusive Right to their respective Writings and Discoveries.” Our Founding Fathers were clear that “Authors and Inventors” had legitimate rights to their creations, but patent trolls are perverting the Founders’ intent, and hampering our Constitutionally-enshrined inspiration to invent and improve.

Our Congress has a great opportunity to stop patent trolling by passing H.R. 9, the Innovation Act, sponsored by U.S. House Judiciary Chairman Bob Goodlatte of Virginia. An identical version passed the House of Representatives last year by a significant margin, but former Majority Leader Harry Reid and his Democrat colleagues in the Senate refused to even hear the bill.

Now, with majorities in both chambers, Republicans can pass this legislation and prove once again that they are the party of innovation. Conservatives have made great gains against frivolous lawsuits and those who profit from them in the past, and it is now time to tackle this next frontier in tort reform. Speaking on the matter, President Ronald Reagan summed it up simply, “Trustworthiness, my friends – let us make this our ideal.” America’s job creators should be able trust that their business won’t be pounced on by greedy patent trolls. And the least the government can do is protect them by upholding the Founder’s intent in our constitution.