Andrea Bottner
|
Posted: Jan 16, 2022 12:01 AM
Share   Tweet
The opinions expressed by columnists are their own and do not necessarily represent the views of Townhall.com. 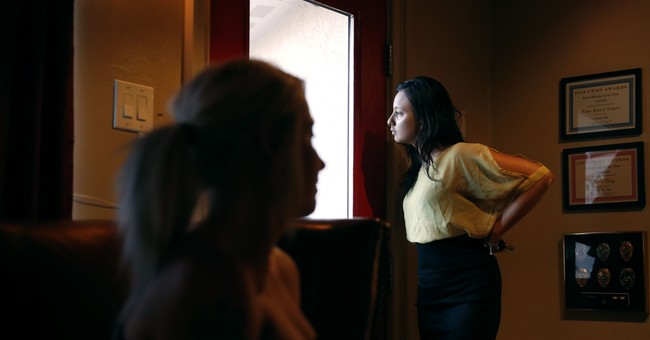 January was chosen for this awareness raising effort to tie it to President Abraham Lincoln’s Emancipation Proclamation which was issued in January of 1863 and declared 3.1 million slaves free. In 1865 Congress passed the 13thAmendment to the Constitution, officially outlawing slavery in the United States. Sadly, that doesn’t mean that slavery is behind us, because, make no mistake, human trafficking is modern-day slavery.

It isn’t surprising that Maryland is also an attractive destination for criminals looking to buy and sell human beings. Maryland has three major airports, inexpensive bus transportation, and train service along the east coast. It also has large sporting event venues. All of these factors make Maryland an ideal place for traffickers to rob people of their dignity.

Since 2015, the Hogan administration has allocated $58 million to support comprehensive anti-trafficking efforts across Maryland.

Recently, The Governor’s Office of Crime Prevention, Youth, and Victim Services expanded the Child Sex Trafficking Screening and Services Act Regional Navigator Program. This program puts child trafficking victims in touch with services that will help them get to safety and learn how to be self-sufficient in the future. The program operates in 10 jurisdictions across Maryland.

There are organizations in the United States that track this crime and offer assistance to survivors. One such group, the Polaris Project, has assisted thousands of victims and survivors through the U.S. National Human Trafficking Hotline, which provides 24/7 support and a variety of options for survivors of human trafficking to get connected to help.

Polaris has built the largest known U.S. data set on actual trafficking experiences, and that data is used to improve the way trafficking is identified; how victims and survivors are assisted; and how communities, businesses, and governments can prevent human trafficking. Victims can call a hotline or send a text or email in order to seek assistance. In 2020, there were 529 contacts made to the National Human Trafficking Hotline and over 100 human trafficking cases reported in Maryland.

As Governor Hogan said, “We have made progress in our fight against human trafficking, but there is much more to do. We will not rest until every survivor of this despicable crime is restored and every trafficker is brought to justice.”

Governor Hogan and all our nation’s governors should be making the same new year’s resolution this month: Don’t give up the fight against human trafficking.