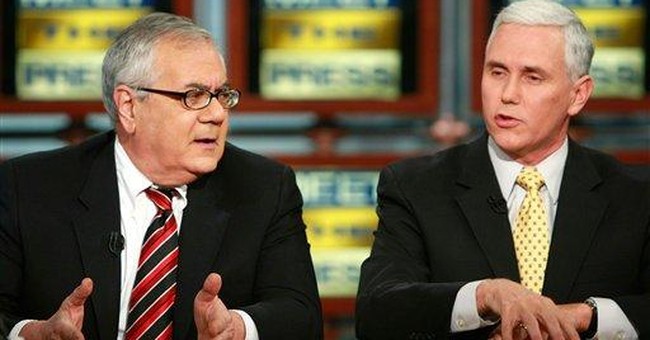 The same day President Obama appeared in Elkhart, Indiana to ramp up public support for his stimulus bill, nearly 300 people showed up at Indiana Rep. Mike Pence’s (R.) town hall to vent their opposition to the legislation.

Pence said normally 30-40 people come to town hall meetings in his district. He was shocked at the hundreds of constituents who came to his event in the middle of the day Monday afternoon.

“They were strongly opposed to the so-called stimulus bill,” Pence told reporters Tuesday morning. “There was a strong consensus we should take the time to get this right,” he said. He mentioned his pitch for “immediate and significant marginal tax relief.”

According to a report of the meeting written by The Republic, a Columbus publication, Pence even received a standing ovation by critiquing the bill. At one point, a teenage girl asked Pence what the stimulus package would do to help her father whose hours have been cut from 40 hours to 24 a week.

“Because I can’t answer that question is why I can’t support the bill,” Pence told her. He was applauded for his direct answer.

Meanwhile, Obama trumped the importance of passing a stimulus bill in Elkhart, the RV capital of the world. Elkhart has been plagued by high unemployment, which Obama blamed on lack of consumer credit in the market. There he promised his plan would “create or save” 4 million jobs.

Obama held a prime-time press conference on Monday evening where he chastised Republicans for unwillingness to support the bill. He mentioned the “unprecedented” overtures he made to the GOP and accused some of possessing “ideological blockage.”

The Senate is expected to vote on passage of the bill this week. Then House and Senate negotiators will work out the differences between the bills before sending the bill back to both chambers for a final vote.

Pence was optimistic, at least in his remarks, some kind of package could be produced he would be able to support. “I know of no Republican in the Congress of the United States who wants to do nothing,” he said. Still, Pence said Republicans “genuinely believe in our heart of hearts this bill will not work. “

He expressed hope the public would continue pressuring Congress to pass a better bill.

“When the American people choose to be engaged anything can happen,” Pence added