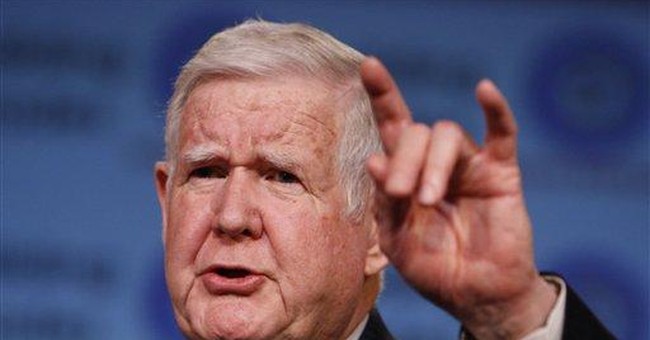 The anti-incumbent tide is so strong this electoral season it just might sweep out one of the most powerful bulls from the House of Representatives.

Residents in Pennsylvania's 12 District have tolerated much controversy from Rep. John Murtha (Pa.) but his recent remarks about some Pennsylvanians being "racist" could end his 34-year Washington career.

Murtha’s recent accusation that some voters in his state are “racist” has given his Republican opponent William Russell, a retired Army lieutenant colonel, some much-needed ammunition to unseat the incumbent.

“There is no question that western Pennsylvania is a racist area,” Murtha told the Pittsburgh Post-Gazette. Murtha fumbled again when he attempted to clarify that statement to Pennsylvania’s WTEA television station. “This whole area, years ago, was really redneck.”

Murtha, known for his gruff temper, has previously fumed there is “no g** d*** way” Russell would beat him, but a recent Pennsylvania poll conducted by Dane & Associates gives Murtha only narrow 1.8 point edge over Russell, 45.5 percent to 43.7 percent.

Sensing opportunity, the National Republican Congressional Committee is pouring $84,000 into the race to boost Russell with an ad titled “Enough.” The spot uses Murtha’s quotes about the “racist” part of his state and reminds Pennsylvania residents about his assessment that U.S. Marines murdered Iraqi civilians in “cold blood.”

One of the Marines Murtha accused of murder later sued Murtha for libel, but the Marine’s case was ultimately dismissed.

Murtha, an outspoken critic of the war, is chairman of the Appropriations subcommittee on defense and has used his position to try to cut off funding for the war. He’s also used his committee clout to route hundreds millions of dollars in earmarks to his district.

The left-leaning Center for Responsibility and Ethics in Washington has named Murtha one of the “20 Most Corrupt Members of Congress” over the millions of earmarks Murtha’s secured for lobbying defense firms headed by his former employees.