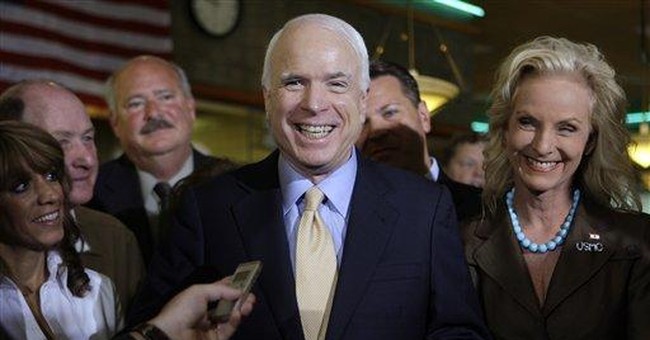 John McCain’s presidential campaign wants you to know Barack Obama isn’t the only one who knows how to raise money.

McCain’s campaign manager Rick Davis said he was “looking at a unified budget of over $400 million” to wage their presidential campaign from now through November.

To get to that number the McCain campaign money raised by the Republican National Committee’s Victory Fund, public financing and state parties, as well as their own fundraising prowess.

Thanks to strong fundraising in the month of June, McCain is planning to spend $200 million before the formally accepts the GOP nomination in early September. The campaign plans to spend the rest though Election Day. A large chunk of the money to be spent from September to November will be the $84 million in tax dollars McCain will get by participating in the public financing system.

David added that he thought the $400 million figure “is a relatively conservative number” and he expects it to be “on par” with what Obama will spend on a conference call with reporters Thursday afternoon.

The McCain campaign is releasing their fundraising numbers in anticipation of the Federal Election Commission’s July 20 reporting deadline. June was McCain’s best month of fundraising yet. He raised $22 million in that time and has nearly $27 million in cash on hand.

Obama’s campaign has not yet released any of their numbers or expected budget needs.

According to the Center for Responsive Politics, Obama had raised nearly $290 million for his presidential campaign as of May 31. Of that he has spent $232 million, leaving his campaign $43 million in cash on hand.