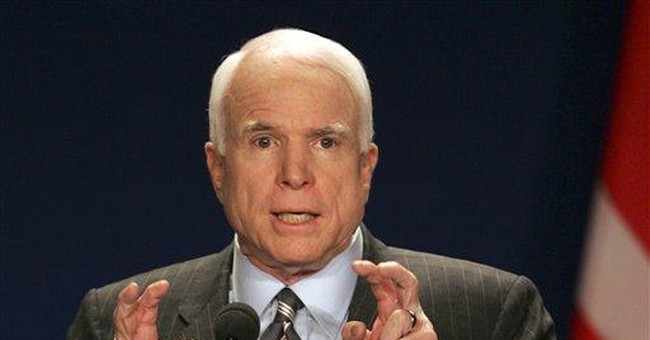 The McCain campaign has scheduled their candidate for a trio of major speeches before Latino interest groups, including the National Council of La Raza-- group reviled by many of McCain’s right-wing critics.

“I and many other colleagues twice attempted to pass comprehensive immigration legislation,” McCain told members of the League of United Latin American Citizens at their annual meeting in Washington Tuesday.

At the rally, some of his supporters carried signs that read “Estamos Unidos McCain” which means “we are united for McCain.” The phrase is also the title of one of one of the campaign’s Spanish language radio advertisements that was released in Nevada and New Mexico last month.

McCain recently launched a different Spanish language radio ad last to question Obama’s relationship with the Hispanic community.. In it, a Latino McCain supporter says McCain has “earned the trust of Latinos” and “it seems to me that the other candidate has just discovered the importance of the Hispanic vote.”

McCain’s Democratic opponent, Barack Obama, also addressed LULAC Tuesday. Like McCain, Obama reminded the audience of his work in the Senate on behalf of Latinos.

“I reached across the aisle in the Senate to fight for comprehensive immigration reform,” Obama said.

Obama also used the occasion to take a shot at McCain, claiming McCain downplayed his work on immigration reform during the Republican primary for political expedience.

“I know Senator McCain used to buck his party on immigration by fighting for comprehensive reform, and I admired him for it,” Obama said. “But when he was running for his party’s nomination, he abandoned his courageous stance, and said that he wouldn’t even support his own legislation if it came up for a vote… We need a President who isn’t going to walk away from something as important as comprehensive reform when it becomes politically unpopular.”

The LULAC rally is the second of three immigration-related stops within a period of three weeks. McCain also spoke at the National Association of Latino Elected and Appointed Officials on June 28, where he made similar remarks to the ones before the LULAC.

McCain vowed to secure the borders “while respecting the dignity and rights of citizens and legal residents of the United States” and as well as praise Hispanic soldiers with “names such as Rodriguez, Hernandez and Lopez that so sadly adorn” the Vietnam Memorial at both events.

The bulk of these two speeches, however, focused on the economy and job creation, not immigration.

McCain will speak at La Raza’s annual meeting in California later this week. La Raza, which translates to “the race” in English, has been roundly blasted by right-leaning border security advocates who oppose the group’s liberal stance on amnesty and other government benefits like taxpayer-funded healthcare, drivers’ licenses and free in-state tuition for illegal aliens, as well as bilingual requirements for state agencies.