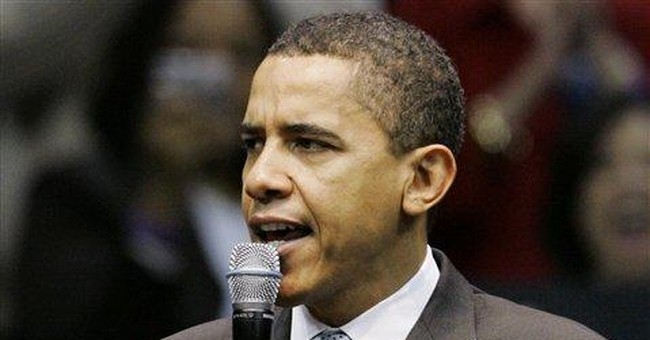 Barack Obama laid out numerous liberal policies he would pursue if elected President and dodged a blow from Hillary Clinton in a critical Democratic presidential debate before the March 4th nominating contests in Ohio and Texas.

Obama brushed off the charges. He said, “The notion that I plagiarized from somebody who is one of my national co-chairs who gave me the line and suggested I use it, I think is silly. This is where we start getting to silly season in politics and people start getting discouraged by it.”

Clinton retorted, “If your candidacy is going to be about words then they should be your own words.” The crowd applauded mildly, but rebuked what she said next. “Lifting passages from someone else’s speeches is not change you can believe in, it’s change you can Xerox.”

After Clinton said this, the audience booed for the only time that evening.

When pressed for policy details on several issues like immigration, healthcare, the economy and international relations Obama supported liberal positions.

Obama chided what he described as hateful rhetoric surrounding debates on immigration. He said immigration rhetoric has had “an undertone that has been ugly” and “we’ve seen hate crime skyrocket in the wake of the immigration debate.”

Obama, who supports comprehensive immigration reform and drivers licenses for illegal aliens, said in the debate he also thought there should be lower immigration application fees because “it’s discriminatory” for immigrant families to “hire a lawyer” and “pay thousands in fees” to receive legal status. Obama added he thought Congress should immediately pass the DREAM Act to give in-state tuition to illegal aliens.

“I do not want two classes of citizens in this country,” he said.

On healthcare, Obama said his and Clinton’s plans for were “95 percent similar.”

“We are going to subsidize those who can’t afford it,” he said.

To improve the economy, Obama said “We have to end the Bush tax cuts to the wealthy and provide tax breaks to middle-class Americans and working Americans who need them.”

“Senior citizens making less than $50,000, you shouldn’t have to pay income tax on your Social Security,” Obama said. “We [can] pay for this by closing tax loopholes and tax havens that are being manipulated.”

Obama and Clinton largely agreed on most issue positions, but sparred over whether or not to meet with the soon-to-be Cuban leader Raul Castro.

As President, Clinton said she would not meet with Castro “until there was evidence change was happening.”

The debate ended on a largely conciliatory tone from Clinton, who is considered to have lost her front-runner status after suffering ten straight primary state losses to Obama.

At one point, Obama offered a strong argument why he would be a better candidate to run against Republican front-runner John McCain, to which Clinton gave no rebuttal.

Obama said, “When we are having a debate with John McCain it is going to be much easier with a candidate who was opposed the concept of invading Iraq in the first place to have a debate about the wisdom of that decision instead of having to argue about the tactics subsequent to the decision.” This was a not-so-subtle criticism of Clinton, who voted for the war in 2002 while Obama was speaking out against it as an Illinois state senator.

After landing no solid, campaign changing blows on Obama, Clinton closed the event by saying she was “absolutely honored” to be with him.

“And you know, whatever happens, we're going to be fine,” she said. “You know, we have strong support from our families and our friends. I just hope we'll be able to say the same thing about the American people, and that's what this election should be about.”