Alveda King
|
Posted: May 18, 2020 12:01 AM
Share   Tweet
The opinions expressed by columnists are their own and do not necessarily represent the views of Townhall.com. 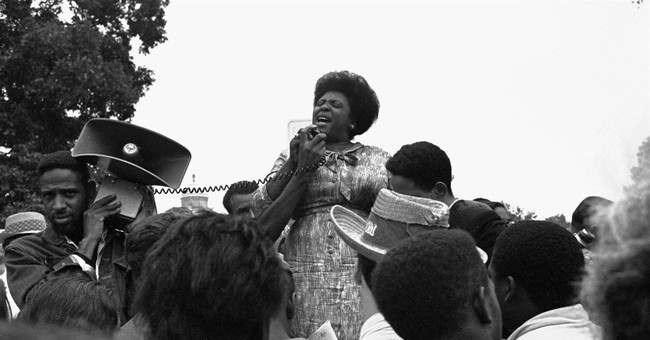 Editor's Note: This column was co-authored by Jeanne Mancini.

The 2020 March for Life theme Life Empowers: Pro-life is Pro-Woman provides an opportunity to highlight various suffragists and civil rights activists with remarkable and often heroic stories. Fannie Lou Hamer was one such woman.

Born into poverty in 1917, Fannie was the youngest child of 20. By the age of 6, she joined her family picking cotton in Mississippi and at the age of 12 had to leave school to work. When she was 27, Fannie married Perry Hamer, and they worked as sharecroppers on a plantation in Mississippi. By the 1960s, Fannie found herself at the forefront of the Civil Rights movement, fighting for equal rights for African Americans, including the right to vote.

Fannie’s work for Civil Rights came at a high price to her personally – during her time as an activist she was fired, threatened, arrested, jailed, beaten, and shot at. In 1962, she became an organizer for the Student Non-Violent Coordinating Committee (SNCC) and later helped found the Mississippi Freedom Democratic Party (MFDP), which challenged the local Democratic Party’s efforts to obstruct black participation in civic life. The MFDP rose to such prominence that President Lyndon Johnson considered Fannie to be a real threat, even calling a press conference to distract the media from her moving appeal before the credentials committee prior to the 1964 convention.

Fighting for the right of African Americans to vote was not Fannie’s only battle. In 1969 she was invited to a White House conference on “food, nutrition and health” which turned into a conference to promote abortion as a form of population control. There, Dr. Alan F. Guttmacher, a founding father of our nation’s largest abortion provider, Planned Parenthood, spoke about removing all laws that protect the unborn. He was confronted by Fannie Lou Hamer about his real objectives.

A heavily biased write-up in the December 20, 1969 Free Lance-Stargives some of the details: “Mrs. Fannie Lou Hamer, a militant black leader from Mississippi and one of the handful of bona-fide poor invited to the conference, denounced voluntary abortion as ‘legalized abortion’ and made it clear that she regards it as a part of a comprehensive white man’s plot to exterminate the black population of the United States.”

Along with Margaret Sanger, Alan Guttmacher helped to create Planned Parenthood and neither hid their support for eugenics. Sanger’s 1939 campaign “The Negro Project” was explicitly aimed at controlling the black population. In fact, it was the Negro Project of Sanger that ultimately targeted Mrs. Hamer for forced sterilization. In 1961, Mrs. Hamer was given a hysterectomy without her consent while undergoing surgery to remove a uterine tumor. Forced sterilization of black women, as a way to reduce the black population, was so common that Mrs. Hamer later coined the term “Mississippi appendectomy” to describe the eugenic travesty. “In the North Sunflower County Hospital,” Hamer said, “I would say about six out of the 10 Negro women that go to the hospital are sterilized with the tubes tied.” Even after this, Fannie and her husband, Perry, were determined to become parents and adopted two daughters – an amazing testament to the love this couple possessed and wished to share.

It would likely not surprise Fannie Lou Hamer that today 72 percent of all abortions in her home state are committed on black babies – even though African Americans comprise only 37.4 percent of the population in Mississippi. Nationally, African-Americans account for 36 percent of all abortions while making up only 13.4 percent of the total population. And in New York City, which has been called the abortion capital of America, an unborn African-American child is more likely to be aborted than brought to term. At these national percentage levels, we have lost more than 19 million black Americans to abortion since the 1973 Roe v. Wade decision.

Despite suffering so many grave injustices during her life, Fannie Lou Hamer never gave up fighting for a better world. Let us carry on the legacy of this civil rights hero by working towards a world in which the beauty and dignity of every human life, born or unborn, and regardless of race, is valued and protected.

Jeanne Mancini is President of March for Life. Dr. Alveda C. King grew up in the civil rights movement led by her uncle, Dr. Martin Luther King Jr. She is director of African-American outreach for Priests for Life and Gospel of Life Ministries. Her family home in Birmingham, Ala., was bombed, as was her father's church office in Louisville, Ky. Alveda herself was jailed during the open housing movement.