The MLK Dream Is Alive and Expanding Under Donald J. Trump

Alveda King
|
Posted: Aug 28, 2019 1:32 PM
Share   Tweet
The opinions expressed by columnists are their own and do not necessarily represent the views of Townhall.com. 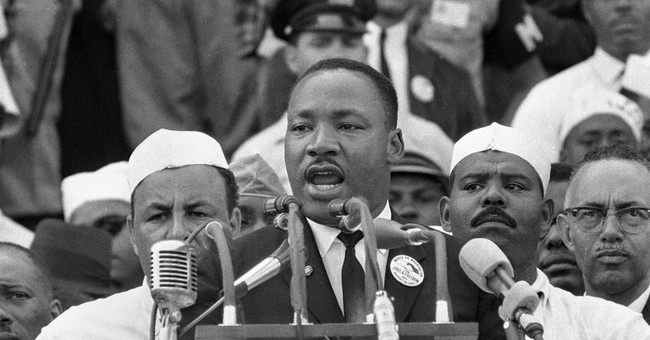 This Wednesday marks the 56th anniversary of Dr. Martin Luther King, Jr.’s iconic “I Have a Dream” speech. It was as historic as it was inspiring for all Americans to look to a future where our society would be one.

While there’s certainly more work to be done on that front, there’s much to celebrate today about the great new opportunities for black Americans to achieve the American dream. I know that my uncle would have been proud of everything that President Trump has done to make those opportunities possible for our community.

For instance, for the past two and a half years, our president has championed the sanctity of innocent human life, fighting against the moral corruption of abortion and infanticide. This fight is especially important for African Americans — last year, the Centers for Disease Control and Prevention revealed that 36 percent of all abortions in 2015 were of black babies, despite the fact that African Americans only represent about 13 percent of the the U.S. population.

“As President, I am committed to defending the Right to Life,” the President asserted earlier this year. “During my first week in office, I reinstated the Mexico City Policy, which prevents foreign aid from being used to fund or support the global abortion industry. We are also working to end the abhorrent practice of elective late-term abortion, a practice allowed in only seven countries around the world.”

Most recently, the Trump administration implemented much-needed reforms to the Title X program, a federal initiative that funds family-planning organizations. The new “Protect Life” rule ensures that grant money doesn’t flow to groups that “perform, promote, refer for, or support” abortions — just as the lawmakers who originally devised the legislation explicitly intended. As a direct result of this rule change, Planned Parenthood gave up $60 million in federal funding — a significant blow to the biggest abortion provider in America.

But President Trump’s support for the African-American community extends far beyond abortion. He has also reformed our criminal justice system, ending discriminatory sentencing laws and striving to ensure that American prisons properly prepare non-violent criminals for their release.

The president’s signature FIRST STEP Act is a monument to this righteous undertaking — the legislation successfully addressed countless problems with our country’s prisons, creating dozens of new programs that focus on rehabilitating the incarcerated population so that former inmates can lead productive, law-abiding lives when they return to society.

Even as he has fought to protect innocent life and fix our criminal justice system, President Trump has also built a strong U.S. economy that benefits all Americans. For far too long, establishment politicians in Washington have ignored the economic obstacles faced by African Americans, holding our communities back through indifference and inaction.

Donald Trump, however, is no ordinary politician. Thanks to his pro-growth economic policies, especially the enormous middle-class tax cuts passed in 2017, minorities across America are more prosperous than they have ever been. The unemployment rate among African Americans, for instance, dropped to its lowest point in history under President Trump.

Hispanics, Asian Americans, and women have all achieved record-low unemployment rates, as well, because this president’s policies don’t discriminate based on race, gender, or any other superficial characteristics. Donald Trump recognizes that we’re all members of the same human family and share the same red blood of patriots, and his approach to governing seeks to advance the interests of all Americans.

Fifty-six years ago, my uncle proudly shared his dream of racial and societal harmony with the American people. Today, President Trump is fighting to preserve that same American dream. If he were still with us today, I know that Dr. Martin Luther King, Jr. would be proud of all that Donald Trump has done to strengthen the African American community.

Alveda King is the niece of Dr. Martin Luther King, Jr. and daughter of King's younger brother, Rev. A. D. King. She is a prominent American author, pro-life and civil rights activist and minister. She is a Fox News channel contributor and once served as a Senior Fellow at the Alexis de Tocqueville Institution, a Washington, D.C. think-tank. She is a former member of the Georgia House of Representatives and the founder of Alveda King Ministries.