When They Go Low

Allie Stuckey
|
Posted: Jun 29, 2018 10:30 AM
Share   Tweet
The opinions expressed by columnists are their own and do not necessarily represent the views of Townhall.com. 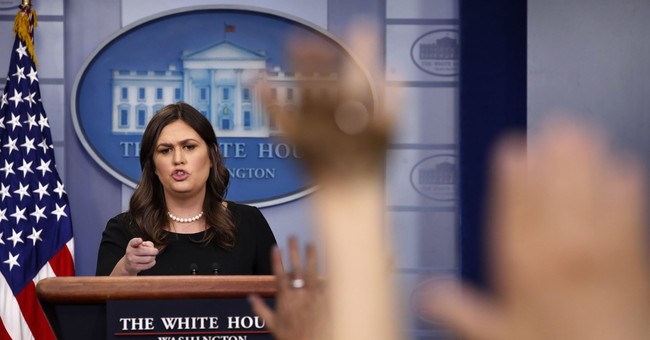 The left has acted out more than usual the past two weeks. Secretary of Homeland Security Kirstjen Nielsen was heckled by protestors in public and at home. Sarah Sanders was kicked out of a restaurant for her affiliation with President Trump. Mitch McConnell and his wife and Transportation Secretary, Elaine Chao, were confronted by a group of men at Georgetown University. To top it off, Maxine Waters called for continued aggression and hostility toward the Trump administration and its supporters.

While Chuck Schumer, Nancy Pelosi and other Democrats have discouraged the provocative rhetoric hurled by Waters, mob-like behavior has already become the norm for many on the left.

An opinion writer for the New York Times penned an article highlighting the crisis of democracy she believes we currently face. She shuns the call for civility, insisting that the hatred of the Donald Trump and his supporters is justified. Unlike conservatives, whose "revulsion of a black president” is based on “birther conspiracy theories,” progressives have good reason for their riots: Trump is a “racist,” and his presidency is one of “cruelty and degradation.”

This is a dishonest attempt to justify their outrage: Trump and his policies have little to do with the current aggression on the left. The scope of their antipathy is much wider than the White House and existed long before the president took up residence.

The media skewed left long before Trump took office. It is not against Trump that students protest on college campuses every time a conservative—or any non-socialist—speaks. Academia showed intolerance toward conservative ideas before Trump came into the picture. Trump is not the impetus for anti-conservative discrimination by social media sites. The violence of left-wing extremists like antifa is not in reaction to specifically Trumpian policies. It is not exclusively against Trump or his supporters that their hatred is unleashed—it is against anyone who disagrees with them.

There are many harmful habits of which Trump is guilty: inflammatory rhetoric, tendency toward hyperbole, petty fights, tactless tweets. But to assert that he is the reason—and the justification—for the hatred and intolerance on the left is a lie, and to assert that the outrage is simply a manifestation of concern for our democracy is more superficial subterfuge. The fact is, progressives fear their grip on culture may be slipping.

The New York Times piece claims that “[l]iberals are using their cultural power against the right because it’s the only power they have left.” This is a purposeful misrepresentation of reality. While Republicans control the White House and Congress, it is Democrats and progressives who wield the power to form public opinion. They are the vast and loud majority in academia, Hollywood, Silicon Valley and news media, working hard to secure their stronghold on the American mind. Donald Trump is a symbol of that which they have feared for years—the chipping away of their cultural tyranny. And, like any dictatorial regime, they react in violence and anger against anyone who dare threaten their supremacy. Their actions under any Republican president would have been the same.

Since 1990, Democrats have moved further to the left on virtually every issue, while Republicans have remained fairly steady. During Obama’s presidency, in particular, Democrats’ belief that racism is the main inhibition to the success of black people surged. That is not because America is actually more racist than it was in the 1990s—it is because of the popularization of identity politics, intersectionality and consequential tribalism propagated by the members of the far left and legitimized by Obama.

We should not expect a political party increasingly embracing neo-Marxism to go quietly into the night. They are self-deemed vigilantes waging war against the evils of classism and capitalism. Their fight is not political but moral. They are on “the right side of history,” and it is their cosmos-given duty to fight against any and all ideas that defy their definition of justice.

They therefore have no place to decry the erosion of democracy. It is not a functioning democracy they seek to preserve, but a dictatorship. Their ideological tyranny is under attack, and in an effort to fight back, they attack Trump for their own ever-increasing insanity.

If anything endangers our democratic republic, it is incivility itself. Incivility, fueled by emotion and an inability to properly articulate a logical argument, renders democracy unfeasible. The savior of democracy will not be resistance to Trump, but rather a return to productive, vigorous, substantive debate on the validity of competing ideas.

Politicians and partisans on both sides of the aisle—including the president himself—would do well to recognize the collateral damage perpetual tribalism will have on our nation. Conservatives, especially, must be wary of allowing indecency to become our rule rather than our exception. Unlike progressivism, wherein the government acts as the arbiter of all social and civic life, conservatism depends on the responsibility of the individual to treat others with respect. The very ideal for which conservatives fight—self-governance—is not possible without an adherence to a basic moral code that upholds the dignity of human beings and consequential deferential dialogue.

If liberty is the vehicle to prosperity, it does not run on the fuel of hatred and harassment. It runs on the acknowledgement of the value of the individual, manifested in our treatment of others—both personally and politically. Conservatives should have confidence that civility is the best way—the only way—to preserve the uniquely American freedom for which we fight. When they go low...