Allen West
|
Posted: Nov 30, 2016 9:38 AM
Share   Tweet
The opinions expressed by columnists are their own and do not necessarily represent the views of Townhall.com. 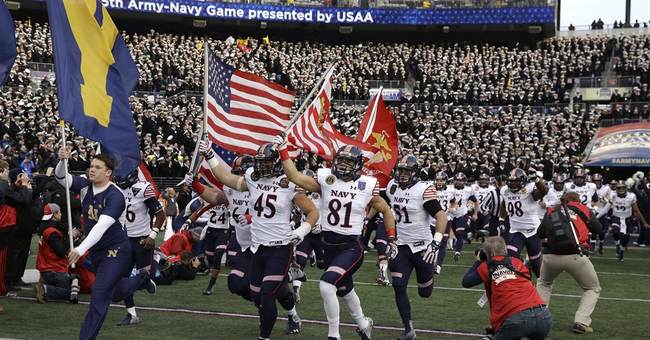 Those of you who know me know that fall is always my favorite time of the year. I am one heckuva college football fan. Sadly just last week, my Tennessee Volunteers went down to our in-state rivals, Vanderbilt. But that is what you have to love and admire about college football - the odds NEVER make sense, and the passion of young men on the field can win the day over the statistics.

Many of you enjoyed a blessed Thanksgiving last week, and a huge part of that was the final week of rivalry football games, which often pit family members against each other. Take games such as Florida-Florida State, Alabama-Auburn, Georgia-Georgia Tech, Mississippi-Mississippi State, South Carolina-Clemson, Virginia-Virginia Tech, and the vaunted “civil war” between Oregon-Oregon State, just to mention a few. I know, folks want me to list Harvard-Yale. These contests bring out our most passionate emotions for four to five hours. But in the end, we all come together - perhaps after taking a ribbing for losing.

But there is one game, reserved for its own very special day at the end of the college football season, which is one of the greatest of rivalries. It is a game that has earned the moniker “America’s Game." It is Army versus Navy.

The first Army-Navy game was played on November 29, 1890 and it has been renewed annually since 1899 except for the years 1909, 1917, 1918, and 1929. The game normally decides the winner of the Commander-in-Chief's Trophy. Right now, Navy enjoys the longest winning streak in the series; 14 consecutive victories – and as a Soldier, well, that one hurts. This year on December 10th, it will be the 117th playing of this game. Even though I am not a graduate of the United States Military Academy at West Point, and have never attended an Army-Navy game, I am an American Soldier. On that day, I am a Black Knight of the Hudson.

I remember when I was a Captain in the First Infantry Division, one of my Lieutenants was on the West Point football team that upset the Tennessee Volunteers in Knoxville. Of course, he did not let me forget that, and I still gave him a favorable efficiency report. When I resided in South Florida, it was as if every former Naval officer had retired there. The abuse was incessant, and lasted all year long.

See, for that period of time, and the homemade commercials attest to such, these two services are the most vehement of adversaries. We live by a simple chant, “Go Army, Beat Navy," and vice versa. On that playing field, young men pour their hearts out to win more than a game; to win that claim to fame. Living here in Dallas now, I recall the time when I was invited into the home of Roger Staubach and actually saw the Heisman Trophy he was awarded when he was quarterback at the Naval Academy. The point is that we don’t have to have attended either of these fine institutions to have an affection, and strong emotion, for this contest.

And it is a hard fought contest indeed. From the time when you have the march onto the field of the Corps of Cadets and the Midshipmen, American’s chest fills with pride. They fight hard, but in the end, one will be victor, the other loser – and we Soldiers are tired of losing. However, something very indicative of America happens at the end of the game. Each school stands in reverence as the Academy song is played, winner goes last. But even more so, these rivals, these ardent adversaries will one day take an oath, “To support and defend the Constitution of the United States, against all enemies, foreign, and domestic…and to bear true faith and allegiance to the same." These gridiron warriors then become American Warriors. They never forget their years at West Point or Annapolis as a defining moment in their character development. But they realize that they are Brothers and Sisters on a greater team: Team America. And so they take their positions, jointly, upon freedom’s rampart to serve and protect our way of life, and the very document that embodies us as Americans. Sure, every year they will take their respective sides on the esteemed day of Army-Navy. But they will NEVER lose focus on the battlefield upon which they serve together.

Just like an Army-Navy game, this election was fought with immense passion and emotion. It is now time for us to realize that we are all on Team America.

That is an important lesson for the Democrat party to embrace at this time. If anyone thinks we Soldiers like the results of the past fourteen years, losing to Navy, we don’t. However, we lick our wounds, bandage up our pride and know that we have earned a title that can never be taken away, that of American Soldier. The real victory comes not just in a game, but in the preservation of this Constitutional Republic.

Those who call themselves Democrats, actually progressive socialists, must ask themselves the same question. Is this about the preservation of our Republic, or just the desire to win? All of these protests, challenges to our electoral system, and calls for recounts seem ill-advised, especially as the results are known, and concession has been offered.

Imagine what would happen at the end of the Army-Navy game if the Cadets of West Point decided not to stay on the field while the Navy song is played? We, as a Nation, would be appalled at the lack of decency, honor, integrity, humility, and grace. If those young men and women, who are the best amongst us, can do just that, why can’t the Democratic party? Unless they are admitting that they do not possess those same impeccable standards of character.

This weekend are the college football conference championship games. The following weekend is a game where every young man on that field is a champion, the Army-Navy game. These young men and women are our future leaders and they represent a lineage; a legacy of service, sacrifice, and commitment to this Nation. The players’ uniforms will have the patches of Army, Navy, and Marine Corps units. The back of the Army jerseys do not have a name; it just says “Army."

On December 10th, 2016, I believe that every American worldwide should be watching one program: the Army-Navy game. Watch it with your kids, and teach them its history, knowing that we can all learn a lesson from these men and women as they play “America’s Game."