“The Super-Secret Handshake of the Black Community”

Allen West
|
Posted: Aug 30, 2016 4:30 PM
Share   Tweet
The opinions expressed by columnists are their own and do not necessarily represent the views of Townhall.com. 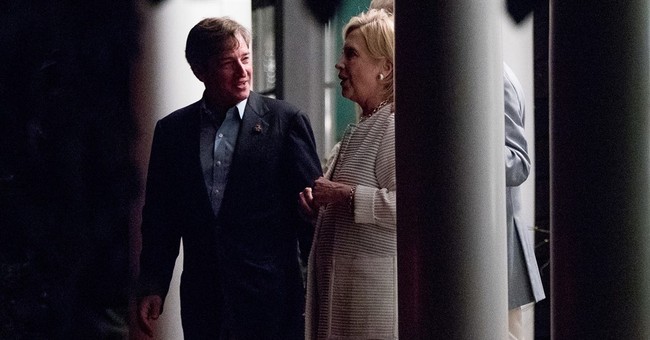 Something is happening in this presidential election cycle that has some folks totally up in arms. A white GOP presidential candidate is addressing the issues in the black community. And, of course, Donald J. Trump has kicked the hornet’s nest and is consistently castigated with the ultimate denigrating moniker of “racist.” Trump is finding out that there is a super-secret club handshake in the black community. And the only white people who have been provided that code are white liberal progressive socialists.

What amazes me is that here we have someone challenging the failed progressive policies of the inner city and his sincerity is questioned? Why has no one EVER questioned the sincerity of the Democrats who have run the inner cities of America for decades? Easy answer, they have the secret sauce and Hillary Clinton even admitted she carries it in her purse. When the left, (or the appointed black gatekeepers) are challenged on their policy shortcomings in the black community, the retort is racism. That is the means by which suppression of the discussion is sought. If you are a black conservative, then you are told you are not really black, only a token, Oreo, sellout, Uncle Tom and several other denigrating titles that are too vile to repeat here.

Even those of us who have been born and raised in inner city neighborhoods are told we have no clue about the “black experience.” I was raised in Atlanta’s historic Old Fourth Ward, which produced Dr. Martin Luther King Jr. Funny, I suppose a biracial fella who was raised early on in Indonesia and ended up being raised by a white grandparents in Hawaii has a clearer perspective. Then again, Barack Obama was given the code, the super-secret handshake because he is a progressive socialist.

So, it becomes very apparent that one does not talk about the decimation of the black family. No one needs to know that, prior to the policies of Lyndon Johnson, the two parent black household was at 75%-77%. Even a white, liberal Democrat senator from New York, Daniel Patrick Monyihan, admonished Johnson against instituting the policy of government checks for out of wedlock children, caveated by the condition that no man could be in the home. Monyihan obviously did not know the super-secret handshake because he was attacked and demonized for speaking out. I am reminded of his famed quote, “You are entitled to your own opinions, but not your own facts.” The fact is that many of the issues in the inner city, the black community, stem from the destruction of the black family. But, if you are not part of the secret club, you best not speak of that, lest you are attacked.

If you are a member of Black Lives Matter, you have a double super-secret handshake and membership. And your membership card is printed by a white liberal progressive socialist named George Soros. How odd is that? Trump gets the ultimate beat down for addressing issues in the black community. He is criticized for speaking before white audiences. Ask yourself, when was the last time Soros went before a black audience? Does not matter, he has the super-secret handshake, probably given by Al Sharpton himself.

But, why is it that BLM has little to say about the rise of black gangs? They say nothing about better education opportunities and choice in the black community? Consider that the only choice offered to blacks by white liberal progressive socialists is to kill their unborn children…to the tune of 13-15 million since the 1973 Roe v Wade decision. I guess those lives don’t matter, after all, they did not get the super-secret handshake. Donald Trump gets pilloried for speaking of school choice, vouchers, charter schools, homeschooling…anything that is better than the failing public schools that plague the black community. Ask yourself, when was the last time you heard any member of the Congressional Black Caucus champion the issue of school choice? You will not because they fear losing the code provided by the white liberal progressives of the teachers unions. So, generation upon generation in the black community falls behind and ends up as the two young Chicago black men, the Sorrell brothers, ages 26 and 22, who shot the cousin of NBA superstar Dwayne Wade as she walked her infant child in a stroller. These two young men were on parole for a gun conviction. They were also gang members.

Unless you have the super-secret handshake code, you cannot talk about black on black shootings and murders. Matter of fact, it is about the gun, not the socio-economic factors creating the violence. And, you had best tow the talking points line, or else have your membership card revoked -- which is what we see from the liberal progressive media. Their propaganda is not focused on the real issue. How many shootings and deaths occurred in Chicago this past weekend? The message from the leftist media is all about maintaining the status quo, the 21st century economic plantation. It is about the perpetuation of the dependency society, the welfare nanny-state. They will never challenge the notion of economic enslavement to the government masters.

There is a quote attributed to George Orwell, “During times of universal deceit, telling the truth becomes a revolutionary act.” Indeed, in the black community, truth is condemned as hate speech simply because it exposes those who have done genocidal and horrific actions. We must continue to challenge them at every turn. Sadly, it has taken all this time for any GOP presidential candidate to elaborate on this. It cannot be about just an election cycle; this is an issue that has to be constantly engaged. No one group should ever invest all of their political capital into one ideological party agenda. And, when assessing the return on investment for the black community for their consistent electoral patronage of the Democrat party, well, it speaks for itself.

My evidencing such will draw demeaning comment, but see, I know the super-secret handshake, the code. I just refuse to be a dependent subject, and that is threatening.