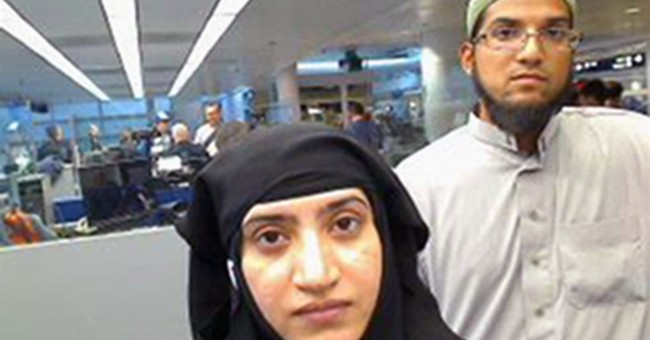 There is a major difference between a spree murder and jihad. Especially when Muslims commit it at a Christmas party.

Lumping spree murder and jihad together is a journalistic mistake, misleads the public, and assaults our precious Bill of Rights. The gun issues involved are different.

The religious murders (not “terrorism”) committed in San Bernardino and all over America at this point are all part of the global jihad being waged by Muslims against us. Not all Muslims, just Muslims waging jihad. Plus their vocal and silent supporters.

Calling these independently staged military attacks “terrorism,” even though they are terrible and terrorizing, is part of a self-destructive national effort to deny and disguise the truth about the jihad. It also falsely adds to the assault on the American right to arms, at the worst possible time.

The deception is being waged primarily by democrats, aided and abetted by the “news” media’s artful use of language and the person in the White House, whose middle name we’re not supposed to use, due to political correctness:

“It wasn’t clear at press time if Ms. Rodham-Clinton thinks hyphenating Hussein-Obama supports those who see suspiciously exaggerated tolerance for Muslim interests coming from the White House. Other hyphenated forms, such as African-American, seem to pose no political-correctness problems. (Ben Carson, who is black, said political correctness should be abandoned, during a recent presidential debate.)”

We may not be at war with the jihadis—for lack of congressional action and the White House, whatever the cause—but the jihadis are at war with us. It is asymmetric warfare, with their leaders encouraging allies to attack us without central command and control. So why look for linkages?

The fact that there is (or isn’t) a “direct link” to al-Qaeda, the Taliban, ISIS or ISIL (which are VERY different), Iranian mullahs, Islamic Jihad, Hamas, Hezbollah, the Muslim Brotherhood, Boko Haram, al Aqsa Brigade, the Taliban, CAIR or the scores of other “official” terrorist (Muslim) groups that come and go over time, or simply Muslim writings, is meaningless and immaterial. That search misleads. When a Muslim named Muhammed fires on a military base, a Christmas party, any innocent Americans going about their business, it is NOT a mass shooting. It is jihad.

What Must Be Done

Jihad statistics must be kept separate and apart from crime stats.

The solution for the Muslim jihad is not the same as ameliorating psychotic spree murder. Surely you can see that.

Calling participants in either event “gunmen” is inaccurate and imprecise (and sexist). A jihadi is a warrior, an enemy combatant operating on U.S. soil, purposeful and part of a larger plan, and not mentally ill.

A psychopath who acts out in murderous frenzy is literally mad, no longer connected to societal norms. A military response and a medical response—those are the respective tools kits. The jihadi doesn’t need the medical and the psycho doesn’t need the National Security Administration.

The assault by Democrats on the right to keep and bear arms should logically take different forms to prevent each type of incident. Stopping spree murderers is a mental-health issue involving the medical industry and one set of laws. Stopping the jihad is a political issue involving religion, immigration and geography, an entirely different legal framework.

Democrats, liberals and the “news” media are waging—have long been waging—a campaign against Americans’ right to keep and bear arms. They are now using the Muslim intifada (“uprising” against western civilization) to advance their anti-rights cause—a pernicious, immoral and grotesque concept. By conflating Muslim jihad military attacks on America, with psychotics killing people at random, they build, or think they build, a case against 100 million innocent people owning guns.

Just the opposite is true. The worse the jihad gets, the more Americans need to cling to their guns and Bibles. With civilian Americans under military-style assault, this is the last point at which to limit Americans, who are currently reasonably well armed. Democrats insanely think it would help to limit we the people to pop guns and six-shooters. Limit the public to only a few rounds in a magazine? Disarm the jihadis, not us. We need parity with police, not poverty.

Lumping together jihad assaults and attacks by Muslims with spree murder and mass shootings by insane people is deception and propaganda designed to attack our precious Second Amendment rights. Jihad and Muslim assaults are reasons to strengthen, not weaken, our right to arms. The Greatest Generation understood that principle to its core when they faced global assault. What has happened to us?

Muslim jihadis are not affected in any way by gun laws, background checks or phony so-called “gun-free zones,” They relish them. They know these create soft targets they can engage with ease. They laugh at us for making these and falsely believing they are meaningful. Only liberals and the ignorant feel these are useful. Conservatives understand these are horrific reductions in our freedoms and serve those who hate us and seek to destroy us.

Look how differently “news” stories read when you call a spade a spade. Ken Ritter, writing about San Bernardino for the Associated Press—the service that provides content for virtually every American newspaper and broadcast station—talked about, “a mass shooting... killed 14... at a holiday party...” Would the public get a different picture if he accurately said, “a Muslim jihadi assault... murdered 14... at a Christmas party...” Would it be too editorial to say, “Another in a long string of deadly Muslim jihadi attacks on U.S. soil”?

It is urgent. The White House effort to disguise such activity as workplace violence and other deceptions must evaporate soon or people will be out protesting with torches and pitchforks.

Our countrymen trying to disarm us in the face of military assaults within our own borders are at least as dangerous as the enemies attacking us directly with arms. To the extent elected individuals suggest infringing on our rights they violate their oaths and earn removal from office.