Arm the Army, Part I 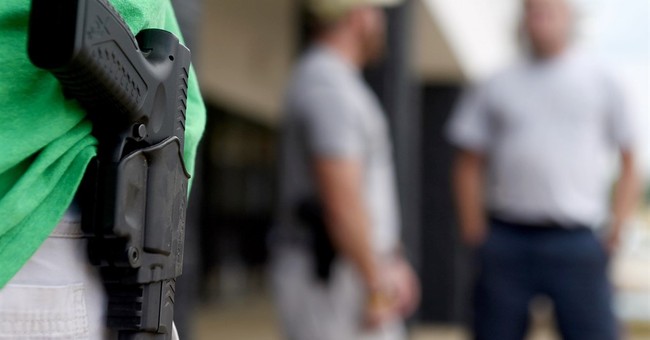 in Wake of Muslim’s Attack

on Marines and Sailor

Reacting to the horrific bloodshed by yet another Muslim jihadi attack on U.S. soil, this time at a military recruiting station in Chattanooga, Tenn., Congress has rushed no less than five “Arm the Army”-type bills into the legislature.

NOTE: The term “soldiers” is used here as shorthand for all our military personnel, and “Army” is short for all armed services, no slight intended to the dozen or more separate names.

This repeats the mistake the anti-gun-rights bigots make every time a drug-crazed psychotic shoots up a convenience store or theater. Root causes for our military being disarmed need to be examined, and hard. How ripe are we for a coordinated assault, let alone disjointed forays? Congress is reacting as if to a crime scene, with laws that will affect us forever. It is not the right way to pass intelligent laws. The anti-gun-rights people keep teaching us this. We’ve apparently learned nothing.

All sorts of unintended consequences are about to spring, that’s clear if you study the bills. I suspect few people have read them, because the initial praise for the bills came out before all the bills were available for review. The three that were posted early had some very obvious problems, like why won’t they let our guys carry rifles? Why just limit them to handguns when they face those nasty “assault weapons” from the jihadis? It gets worse. Follow the details in plain-English at my site GunLaws.com, under “Updates and Position Papers” and at “New Stuff” http://www.gunlaws.com. See summaries here at Townhall below.

The murderer, now dead at the hands of civilian (not military) authorities, has been described as a “gunman” by so-called “news” media, who perpetually mischaracterize such events. That term is a slur against both men and guns, instead of calling the villain what the public can see he was.

The attack was an asymmetric offensive assault, carried out by a Muslim jihadi, in the global Muslim jihad ordered by Islamic radicals operating from the Middle East and elsewhere. People named Muhammud don’t murder Marines and Navy sailors at military facilities in surprise attacks at random. Everyone knows that.

Muslims operating under different names and flags, many but not all concentrated in the Middle East, have declared and are conducting war against the United States and other targets they have declared enemies. The media and some politicians, including our current executive branch, play down this perspective for reasons that remain unclear. Other politicians recognize the existence of an enemy and were motivated to act, precipitously.

Opposition to the radical Muslim aggression from the supposed “moderate Muslim” community has barely risen to audible level, causing many to doubt if it actually exists. Reports of the massive deaths and horror in the global jihad overseas are a nearly daily occurrence. One of the congressional proposals, Senate Bill 1823, lists jihadi missions conducted on U.S. soil.

Congress listed the military battles the person currently in the White House is deliberately pretending do not exist. The bills, more than anything else, reflect that Congress is at odds with the commander in chief for failure to act. The route Congress is proposing however will take years to arm the army. The commander in chief could do it right away with a phone and a pen.

Note these are not warring “nation states” as we usually think of in the West. These are “Islamic states,” religious constructs based on religious texts that are strict, inviolate and brook no deviation, which is a problem for international relations. They are bound by philosophy, not borders.

In a headlong race to save our nation, stop jihadis from committing atrocities on U.S. soil, bring the U.S. military up to fighting strength, show we mean business, do what’s right, just do something, demonstrate to constituents that we’re going to do the right things and right the wrongs of olden policies, politicians have rushed these bills into Congress to arm our military.

Issuing paper is not the answer. The president is sitting back knowing nothing will happen for months or years, or ever, and he’ll play golf with armed guards all around, while our armed guards are gunless.

Congress and the public should demand that the commander in chief act immediately to ensure armed personnel are properly stationed at all military facilities, to protect against the possibility of attack. It’s just plain common sense. Paperwork later.