If McCain Wants to Win, He Needs To... 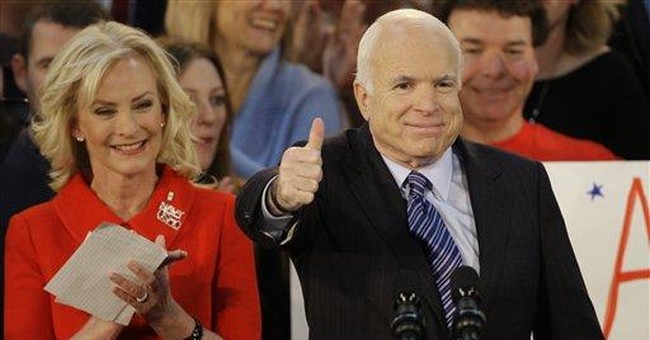 I don't want to spoil all the "happy talk" you're hearing from so many people about how the polls must be wrong because they're telling us something we don't want to hear, but unless the momentum shifts, John McCain is going to lose what may literally turn out to be the most important election of our lifetime.

The polls have definitely tightened in the swing states over the last week or so, but not quite enough for McCain to pull it out -- given that Obama is outspending him, has more enthusiastic voters, and may even have a better field operation.

That means McCain isn't going to win the election merely by pointing out that Obama hung around with Bill Ayers, by condemning ACORN's massive voter fraud, or by meekly intoning that Obama is a socialist.

If McCain wants to come out on top in this election he is going to have to draw much stronger distinctions between himself and Barack Obama and he's going to have to significantly ramp up the intensity of his negative attacks.

Normally, that's something that would be done by 527 groups -- but since they're not fond of McCain because of McCain-Feingold, because they're probably having trouble raising money from depressed conservatives, and because, perhaps not unreasonably, they're worried McCain might publicly denounce them if they take tough shots at Obama -- we can't count on the 527 groups to carpet bomb Barry into hamburger.

Furthermore, since the mainstream media is acting like little more than an arm of the Obama campaign these days, they're certainly not going to start telling the truth about Obama in the waning days of the campaign either.

So, here's what McCain should do: take advantage of the way the news cycle works to saturate the coverage from now until election day through a series of explosive attack ads.

If McCain puts out a genuinely controversial ad, the media will give it millions of dollars worth of free coverage during the 24-48 hours that it dominates the news cycle. But what kind of controversial ads should McCain do? He should talk -- honestly, I might add -- about the very same issues that have been widely discussed in the blogosphere and on talk radio that have been purposefully ignored by the mainstream media.

For example, McCain should do ads on...

Reverend Wright: Play his "God D*mn America" remarks, his "chickens are coming home to roost" comments about 9/11, and his claim that America created the AIDS virus and suggest that Barack Obama agrees with him, which makes him unfit to be President.

Obama's refusal to wear a flag pin and hold his hand over his heart during the National Anthem: Do we really want a President of the United States who doesn't love his country? This issue alone would cost Obama millions of votes if McCain has enough political courage to push it.

The Deficit: McCain has promised to balance the budget and has said there will be no more bailouts. On the other hand, some people have said Obama may run trillion dollar deficits and cause a depression with his tax increases. McCain should run ads showing a grim depression-style America featuring a weeping man apologizing to his dirty faced, overly thin son for ruining the country by voting for Barack Obama.

Inexperience and Incompetence: Obama has no record of accomplishment and he has never made an important decision in his life. McCain should say he's incompetent, that he doesn't even know many states there are in the nation he'd be leading, and that if he had a little more experience, he'd be as qualified as Sarah Palin, his Vice-President.

Obama's cocaine usage: Obama admits that he used to use cocaine. It is an addictive substance, so how do we know he ever quit? How do we know whether he ever dealt drugs? Do we want to tell America's children that it's ok to use cocaine by putting Barack Obama in the White House?

Bill Ayers: The problem with McCain's Bill Ayers attacks so far is that they've been much too tame. The Weathermen actually tried to murder American soldiers. Do the troops really deserve a Commander-in-Chief who would pal around with a guy who tried to kill them? If Obama is soft on Bill Ayers, would Obama be soft on Al-Qaeda as well? It's entirely possible and McCain should be willing to say so.

ACORN: Again, the McCain campaign hasn't gone far enough on ACORN. Obama has worked for these guys. His campaign has chipped in money to them. McCain should accuse him of being pro-voter fraud and trying to subvert democracy.

If the McCain campaign released ads like this every 24-48 hours, his campaign would monopolize the news cycle every day from now until the election, Obama wouldn't have time to respond effectively, and voters would walk into the voting booth thinking about Jeremiah Wright and whether they want a patriotic President or not -- as opposed to "change."

Granted, if McCain did this, the Obama campaign's surrogates and the media would get very angry and call him racist for not politely standing by and just allowing Obama to win -- but, they're already doing that now.

What it all comes down to is that McCain needs to make a decision: does he want to be President of the United States or does he want Harry Reid to like him? Does he want to prevent the Democrats from doing permanent damage to this country over the next four years or does he want to start trying to rebuild his friendly relationship with the Washington Post and the New York Times?

This is a crucial election and a lot of conservatives -- many of whom have never been big fans of John McCain -- have bent over backwards to do everything we can to help him get elected. We've chipped in money, we've encouraged people to vote, and we've stood up for him, even when it wasn't always easy or fun to do. As far as I'm concerned, after doing all that, John McCain owes it to us to do everything humanly possible to win the presidency instead of "going gentle into that good night."