We Are Losing Europe to Islam 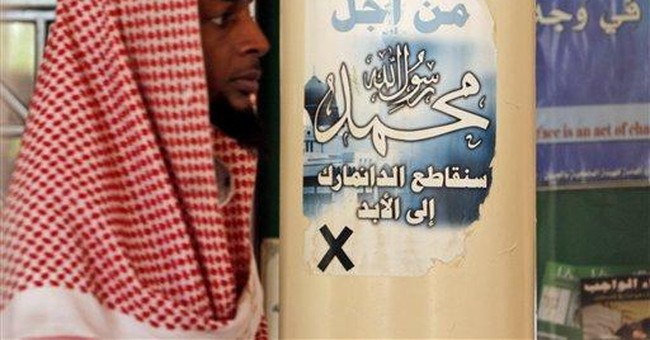 With Wall Street convulsing, and the White House race intensifying, the question "Who lost Europe" is on no one's lips, let alone minds. Indeed, the question begs another: "Is Europe lost?"

The answer to the second question is, "No, not yet." And losing Europe, I would add, is by no means inevitable. But that doesn't mean the continent isn't currently hell-bent to accommodate the dictates of Islamic law, bit by increasingly larger bit. Such a course of accommodation, barring reversal, will only hasten Bernard Lewis' famous prediction that Europe will be Islamic by century's end.

And what do I mean by "accommodation"? Well, to take one tiny example, one snowflake in a blizzard of such examples, there are schools in Belgium that not only serve halal food to Muslim and non-Muslim alike (old news), but, according to a recent French magazine report, no longer teach authors deemed offensive to Muslims, including Voltaire and Diderot; the same is increasingly true of Darwin. (Don't even ask about the Holocaust.)

For a more substantial, indeed, keystone example of accommodation, we can look to England, where, it pains me to write, Sharia courts are now officially part of the British legal system. According to press reports this week, the British government has quietly, cravenly elevated five Sharia courts to the level of tribunal hearings, thus making their rulings legally binding.

It may be difficult to quantify the impact of a Voltaire vacuum on the continent, but we can instantly see the inequities of British Sharia (I can't believe I'm writing that phrase). Among the first official verdicts were those upholding the Islamic belief in male supremacy. These included an inheritance decision in which male heirs received twice as much as female; and several cases of domestic violence in which husbands were acquitted and wives' charges were dropped.

In a decidedly minuscule minority, I say we ignore the spread of Islamic law across Europe, from the schoolroom to the courtroom, at our peril, particularly given that in so doing, we also ignore the vital political parties that have arisen in reaction to this threat to Western civilization. Why at our peril? Because the same type of liberty-shrinking, Sharia-driven accommodation is happening here.

Of the parties dedicated to resisting Islamization that I examined in Europe last summer, the most promising range from the sizeable Vlaams Belang in Belgium to the tiny Sweden Democrats, and include the Lega Nord in Italy, the Party for Freedom of Geert Wilders in Holland, the Danish People's Party, the Swiss People's Party and the Austrian Freedom Party. Such parties are unknown here, or ignored. Worse, they are shunned. Why? I believe it's because their respective political opponents -- the leftist media and governing establishments that are increasingly dependent on Islamic support, by the way -- have successfully slandered these parties as "extremists," "racists," "fascists" and "Nazis."

Is advocating freedom of speech "extreme" or "fascist"? Is opposing Islam's law, which knows no race, "racist"? Is supporting Israel (which these parties do far more than other European parties) "Nazi"? The outrageously empty epithets of the Islamo-socialist left seem calculated to stop thought cold and trigger a massive rejection reflex. In this way, resistance becomes anathema, and Islamic law, unchecked, spreads across Europe.

Does that sound "Islamophobic"? You bet. How can anyone who values freedom of conscience, equality before the law and other such Western jewels not have a healthy fear of Islamic law, which values none of these things? Incredibly, this is an emotion that is supposed to be suppressed -- and, in Europe, on pain of prosecution. Indeed, because Filip Dewinter admitted to such "Islamophobia" in an interview, his party, the Vlaams Belang, has been taken to court in Belgium on charges of racism, and, if convicted, will be effectively shut down through defunding by the government.

That hasn't stopped Dewinter, who, in accepting an award at a memorial event dedicated to Oriana Fallaci in Florence, last week, said: "Islamophobia is not merely a phenomenon of unparalleled fear, but it is the duty of every one who wants to safeguard Europe's future. Europe means Rome, Greece, Enlightenment and Judeo-Christian roots. Europe is a continent of castles and cathedrals, not of mosques and minarets."

Of course, even as Dewinter admits to fearing the Islamization of Europe, he and his colleagues act with exceptional political -- and physical -- bravery in rallying voters against it. This coming weekend, he joins several other politicians on the Sharia-fighting right in Europe -- among them two other men I interviewed, Mario Borghezio of Lega Nord, which is part of Italy's ruling coalition, and Heinz-Christian Strache of Austria's Freedom Party, which is expected to become part of Austria's ruling coalition after elections this month -- in Cologne, Germany. In that ancient cathedral city, where the city council recently approved the construction of a long-controversial mega-mosque, these men will address a rally against European Islamization. (Contrary to initial reports, Jean-Marie Le Pen will not be at the demonstration.) The Sharia-fighters expect 1,500 demonstrators. Police expect 40,000 counter-demonstrators.

These are frightening odds -- a metaphor, perhaps, for Europe's chances of staving off Islamic law. Who lost Europe? If it does happen, we certainly won't be able to say we weren't warned.