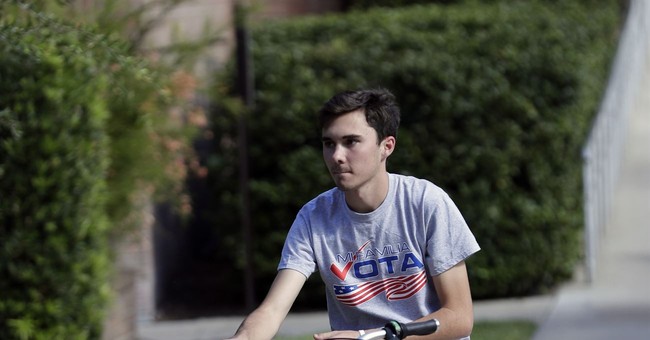 Parkland school shooting survivors and March For Our Lives organizers David Hogg and Jaclyn Corin appeared on a segment of CNN’s “New Day” Tuesday morning with host Alisyn Camerota to discuss their new lobbying efforts in support of gun control legislation that will be proposed today on the House floor.

The gun legislation, supported by anti-gun student advocacy group, March For Our Lives, will be introduced by Democrats who hold the majority in the House of Representatives. The bill will mandate background checks on the majority of gun purchases in the United States.

After both students respectively gave their messages on why Americans should support the proposed gun control legislation, they moreover decided to use the National Rifle Association (NRA) as a political scapegoat.

Camerota then pushed back on their talking points and asked Hogg if universal background checks would have prevented the February 2018 tragedy at Marjory Stoneman Douglas High School.

Hogg tried to justify it, but his explanations were all over the place.

“I think there are many instances, and instances of gun violence, that could have stopped further acts of gun violence. There’s 40,000 people that die of gun violence every year, and a very small minority of them end up being in school shootings,” he responded.

“And if we really want to start talking about a national emergency like the president likes to talk about, 40,000 Americans dying annually from gun violence is a pretty damn good one to start out with,” Hogg proceeds.

There is a #NationalEmergency...it is 109 America gun deaths everyday.

Hogg further petitioned the Parkland school shooting could have been prevented with the proposed legislation being signed into law. Yet, he couldn't provide details on what could have stopped the shooting.

He then returned to blaming the NRA for the violence at his high school, saying the organization "benefits" from mass shootings.

“No legislator should look at these laws and say to themselves, ‘oh I can’t vote on that because I’ve taken campaign contributions from the NRA.’ That’s what they’re thinking,” he said.

What Hogg didn't take into account was the NRA's commitment to securing schools across the country through grants that help make schools hard targets.

“The American people need to wake up and realize again and again, the reason these laws are not getting passed … for example, disarming people like the shooter at our high school could have happened through an extreme risk protection but didn’t, is because that law was actively advocated against by the National Rifle Association. That uses due process to disarm people like terrorists and domestic abusers, but they actively try to stop because it stops these things from happening in the first place, which they benefit from. Because after every single mass shooting, gun sales go up significantly and the NRA benefits...”

This afternoon, Hogg went on a tweet storm over the background check legislation that will go before the House today:

UNIVERSAL
.
BACKGROUND
.
CHECKS
.
Listen up: If you marched with us then we need you now. What should be simple, routine, and evenly applied to all gun purchases isn’t. But now, we have a chance to fight for federal legislation. #HR8

TL;DR: Policy change > thoughts + prayers. Both Democrats and Republicans die from gun violence. Bullets don't discriminate and neither should our legislators. Let’s bring the people’s pressure to Congress and create the change this country needs to save lives.