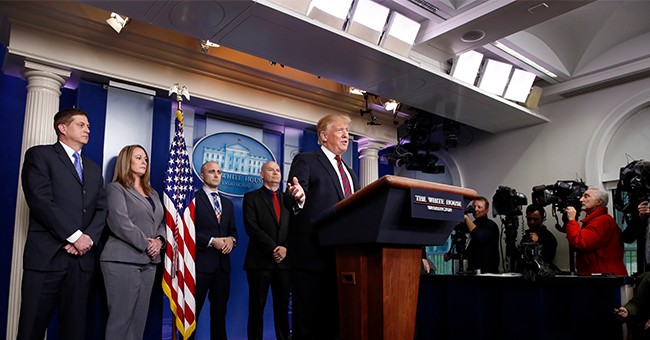 As reported here on Townhall by my boss Matt, President Trump made a special appearance this evening in the White House briefing room where he congratulated Nancy Pelosi on becoming Speaker of The House while also speaking to his main point of urging Democrats to support and fund the wall.

Trump yet again stated that without a wall, you couldn't have a secure U.S. and Mexico border. President Trump brought different voices to the table by having former, and current border patrol agents there to speak to why a wall is non-negotiable.

"Without a wall you can not have border security," Trump stated, after statements from border patrol officers.

"Without a very strong form of barrier, call it what you will, but without a wall you can't have border security it won't work," Trump added.

“I can personally tell you, from the work that I have done on the southwest border, that physical barriers, that walls, actually work.” pic.twitter.com/iMiD4eAMns

The mainstream media and especially the folks over at CNN freaked out over President Trump not only taking the podium, but became furious by the fact he took zero questions from the press.

She wrote on Twitter, "It’s not a press briefing if you don’t take questions." She was also heard yelling in the background regarding the matter of not answering questions while President Trump and this team was exiting the briefing room.

It’s not a press briefing if you don’t take questions.

Brian Stelter, yet again of CNN, also became triggered over President Trump taking no questions after the briefing concluded:

The @PressSec announced a "briefing," but did not hold one. Trump spoke, but left without taking any Q's. A reporter shouted: "Sarah, are you coming back? Are you not taking any questions at all?" She didn't.

And more outrage from CNN reporters over the briefing came later:

President Trump leaves briefing room without taking questions -- making it crystal clear that it was a political dog-and-pony show, rather than an attempt to answer questions about opening the government. No questions taken by Trump or Sanders in first WH briefing of year.

There were no questions taken by Sanders or Trump during the first press briefing of 2019.

This afternoon President Trump tweeted this video stressing the importance of building a wall: