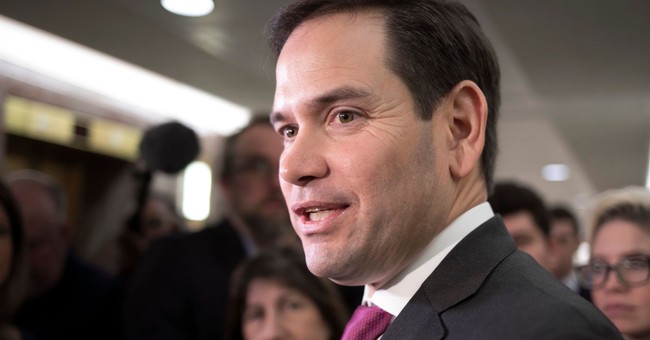 Sen. Marco Rubio (R-FL) this morning tweeted a brilliant analogy on why a border wall is needed in this country by comparing it to that of the Transportation Security Administration's (TSA) role in securing our airports. Obtaining wall funding is now or never as Democrats will soon take control of the House, and the president knows that.

The Democratic senator from Connecticut, Chris Murphy, offered his own opinion on the analogy:

Senator Murphy argues there should be "No wall for the country filled with mostly white people."

Here’s where the analogy breaks down.

We have TSA at EVERY airport.

You and Trump are advocating putting up a wall on only one border. No wall for the country filled with mostly white people. https://t.co/Nlv9gTowxJ

Here are some other horrible takes from "writers" at Shareblue:

"What if we built a wall around the airport?" Marco continued to ask, chugging down his third bottle of water in the last hour. "Like sky walls? Maybe a sky wall? Maybe if I say sky walls they won't make fun of my brown skin. Yes, a sky wall." https://t.co/Zeju1rdaJ6

Can we build a wall around Rubio's Twitter? https://t.co/z4ZMT6zi23

In an earlier tweet this morning, Sen. Marco Rubio stated that the obstruction to fund the wall on the southern border "isn't about the wall" but rather Democrats "denying" President Trump a win on the promise made on the campaign trail.

Rubio then asks in the tweet, why Democrats don't propose the idea to tear down sections of existing boarder wall; if they deem it to be "immoral" to place a border wall on the southern border in the first place.

Then, finally, he took aim at the administration stating that the White House "should have told us they opposed" the Senate bill and not wasted Senate members's time on a bill that Trump wouldn't sign.

1. This isn’t about wall,its about Dems denying POTUS a win

2. If border wall is immoral do they suggest we tear down the ones we already have?

3. On Wed the WH said they “open” to Senate bill. They should have just told us they opposed it BEFORE we wasted time voting on it