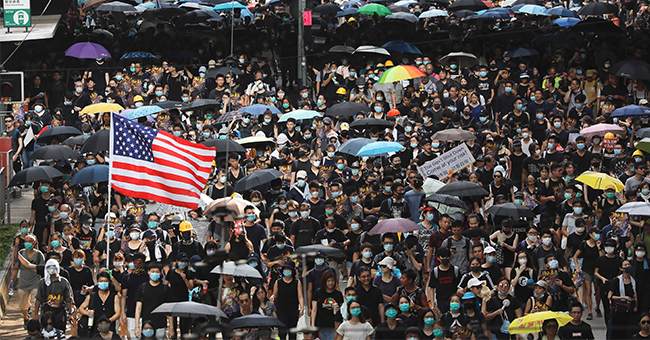 Senate Majority Leader Mitch McConnell took to Twitter on Monday to make clear that he will not tolerate "any violent crackdown" of the Hong Kong protests, lending critical support to the beleaguered demonstrators as Beijing steps up its military buildup near the city-state, spreading fears of a Tiananmen-Esque military clampdown.

"The people of Hong Kong are bravely standing up to the Chinese Communist Party as Beijing tries to encroach on their autonomy and freedom," McConnell tweeted. "Any violent crackdown would be completely unacceptable."

The people of Hong Kong are bravely standing up to the Chinese Communist Party as Beijing tries to encroach on their autonomy and freedom. Any violent crackdown would be completely unacceptable. As I have said on the Senate floor: The world is watching. https://t.co/5VPm5P4PfB

The senator's comment comes at a tense time for Hong Kong protesters. In the last few days, Beijing has linked the protesters in Hong Kong with "terrorism" and amassed military assets and personnel near the city-state, an escalation that has raised fears that China is preparing for a brutal crackdown of the demonstration that now enters its tenth week.

People' Daily, the party paper of the Chinese Communist Party, published a video on Weibo, a popular Chinese social media site, showing convoys of People's Armed Police that it said was reporting to Shenzhen, a mainland city linking Hong Kong to the rest of China. The PAP is part of the Chinese military and specializes in a wide range of internal security operation — including riot control, according to the publication.

video clip shows many military vehicles pass though Qianhai Customs Shenzhen, not sure from Hongkong or to Hongkong.pic.twitter.com/r9kc3U21IX

#Update: More of the same video uploaded by an insider of mainland #China, sharing video footage of military personnel transportation vehicles towards the Shenzhen zone, the outskirts of outside the city of Hong Kong. #HongKong pic.twitter.com/st4tUFEmvi

China's military garrison in Hong Kong had also released a video demonstrating the troops engaged in riot training in early August, a not-so-subtle threat to protesters that the 6,000-strong People's Liberation Army deployment can respond to the protests if ordered to do so.

The military build-up is matched by Beijing's rhetorical escalation. Following a weekend of violent clashes between police and protesters, a Beijing spokesperson said on Monday that protesters are showing the "first signs of terrorism."

McConnell is not the only voice in Congress warning China against taking drastic steps to undermine Hong Kong's judicial and political independence. Senator Marco Rubio and other senators together re-introduced the Hong Kong Human Rights and Democracy Act with bipartisan support in July. The legislation, if passed, would require the state department to certify that Hong Kong is sufficiently autonomous and thus deserving of the special trade status granted to it by the United States, putting pressure on China to respect the city-state's independence or risk economic costs.

"The U.S. must send a strong message that we stand with those peacefully advocating for freedom and the rule of law and against Beijing’s growing interference in Hong Kong affairs,” Rubio said, according to a press release. “I am proud to re-introduce legislation that places the U.S. firmly on the side of human rights and democracy and against those who would erode the freedoms and autonomy guaranteed to the people of Hong Kong."

Hong Kong protesters are also acutely aware of the role the United States can play in shaping China's response to their demonstrations. In May, a delegation of democracy advocates made their way from Hong Kong to The Hill to testify why the United States should oppose the enactment of controversial extradition bill, legislation which originally sparked the now ten-weeks long protest but is now suspended from consideration, The South China Morning Post reported.

The senators' unequivocal alignment with the protesters is at odds with the approach of the Trump White House, which has reportedly been urging all sides to calm down and avoid violence, according to one administration official cited by The Washington Examiner.

"Societies are best served when diverse political views are respected and can be freely and peacefully expressed,” the official told The Washington Examiner. “The United States urges all sides to refrain from violence.”

The administration official's stance is in line with that of President Donald Trump, who echoed China's characterization of the Hong Kong protests as hooligan affairs by calling the demonstrations "riots." He also emphasized that the dispute is strictly between Hong Kong and China and does not require "advice" from a third party.

"Well, something is probably happening with Hong Kong because when you look at, you know, what’s going on, they’ve had riots for a long period of time," Trump said, according to a press release. "But that’s between Hong Kong and that’s between China, because Hong Kong is a part of China. They’ll have to deal with that themselves. They don’t need advice."

"I would like to ask the U.S. side again, what is your intention and what is the real purpose that you want to achieve behind Hong Kong?" Hua Chunying, the spokesperson of China's foreign ministry, said on Monday.

Recently, Chinese media outlets, including ones controlled by the Communist Party, released photos and personal details of an American diplomat meeting with student leaders in the lobby of a luxury hotel, according to Reuters.

The move provoked a sharp denunciation from the state department on Thursday, which labeled China a "thuggish regime" for releasing the personal details of its employee to the public.

"I don’t think that leaking an American diplomat’s private information, pictures, names of their children – I don’t think that that’s a formal protest. That is what a thuggish regime would do," Morgan Ortagus, state department spokesperson, said. "That’s not how a responsible nation would behave. Releasing any of that personal information of an American diplomat is completely unacceptable."