New Zealand 'Factsheet' Wipes Israel From the Map, Replaces It With Palestine 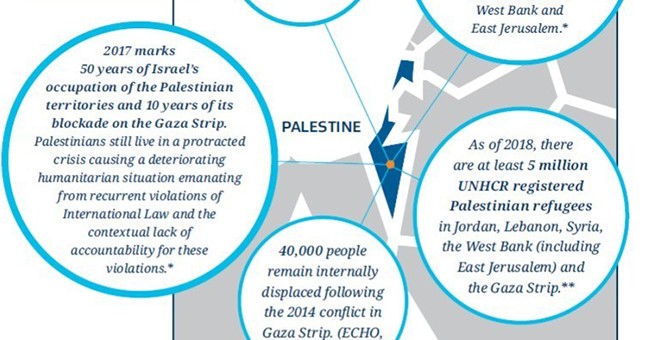 New Zealand’s government recently erased Israel from the map in a “factsheet” on Palestine marred by numerous factual inaccuracies and minimal nuance, provoking outcry from Jewish and Israeli voices.

The “factsheet” labels all territory currently governed by Israel as Palestine. It also calls Palestine as a “state,” which is not consistent with the New Zealand government’s official view.

The document also includes numerous inaccuracies and one-sided information about Israel, Palestine, and the Israeli-Palestinian conflict. The Israeli Institute of New Zealand took the time to systematically break down all the errors in the "factsheet":

The geography of the map is so inaccurate that it does not even include the West Bank in what it calls “The State of Palestine” – it simply replaces Israel (according to pre-1967 borders) with “Palestine”.

It notes that East Jerusalem is the designated capital of this state, but does not explain who has designated it as such. The Palestinians’ seat of government and administration in the West Bank is in Ramallah; Hamas rules Gaza from Gaza City.

The fact sheet provides a cursory overview of the Israel/Palestinian conflict that conveniently ignores facts that would throw a different light on the situation. It states that ‘Following the Six-Day War in 1967, Israel gained control of the West Bank, including East Jerusalem and the Gaza Strip’, but it does not mention that Israel won the territory in a defensive war from Jordan and Egypt, not from ‘Palestine’, as there was no such entity.

The fact sheet further claims that the period of the second intifada saw “massive Israeli repression of Palestinians…” but fails to mention that security measures were undertaken in response to the Arab Palestinian suicide bombers and other attacks that murdered more than 1,000 Israelis.

The document describes Israel’s “economic sanctions and a blockade on Hamas-controlled Gaza” but fails to mention that Hamas is a terror group and the blockade was put in place to prevent rocket attacks – as the Palmer Report to the UN makes clear. It also fails to mention the Egyptian blockade on Gaza or that Israel facilitates the transport of thousands of trucks each week into Gaza.

The “fact sheet” was first published by New Zealand’s Immigration Agency under the title ‘State of Palestine Refugee Quota Factsheet” to give a brief overview of how the Israeli-Palestinian conflict created Palestinian refugees. It is unclear who exactly created the "fact sheet" nor the editing process for it.

After the documents made the rounds on social media with numerous people weighing in on the subject, the government took down the controversial document:

I hope that this insulting mistake will get fixed.

There's no way any of that was a mistake. #NewZealand PM should make an immediate apology to #Israel for their blatant #Antisemitism but don't hold your breath.

Ashley Church, the director of the Israeli Institute of New Zealand, called for the retraction of the “fact sheet” and an apology from the New Zealand government.

“Our Immigration Minister needs to immediately apologize for the offending image,” Church said, according to The Jerusalem Post. “[A]n investigation needs to be undertaken to find out who was responsible and to put in place measures to ensure that this does not happen again.”