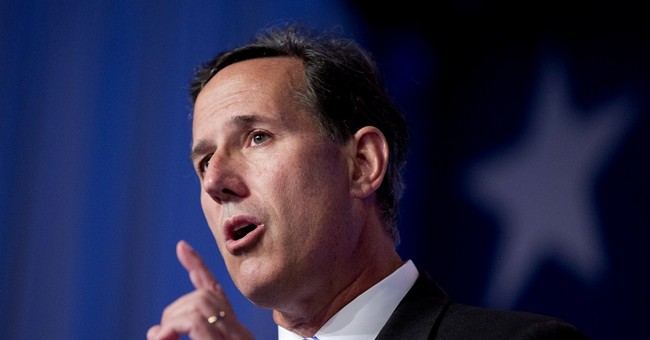 As former presidential candidate Rick Santorum closed his remarks Monday evening at George Washington University, controversy that’s been brewing for nearly a month at the school was visible: half of the students in the auditorium stood in applause while the other half of the room sat stone-faced.

The speech was hosted by GWU’s chapter of Young America’s Foundation, which has come onto the national media stage in the past month because the group boycotted mandatory “LGBT sensitivity training.” In response, GW YAF was labeled a “hate group,” a “cancer,” and was even compared to ISIS.

“The only sensitivity training we need is to respect every person,” Santorum said Monday, to strong applause from half the audience. “Tolerance is the most misused word in the English language.”

“Tolerance means you can say really horrible nasty things that I hate and offend me,” he added. “That’s how we get along. You have a right to be mean -- a right to be nasty to people. That’s how this country works, because we have thick skins and we aren’t offended.”

In his opening remarks, Santorum explained conservative policy on the Obama administration’s negotiations with Iran and the impending nuclear deal, and commented on the recent religious protection law passed in Indiana. Afterward, students queued to throw the former senator some tough questions.

“People aren’t dying in America because of this,” one student said, arguing that business owners should be forced to serve everyone regardless of sexual orientation -- one concept addressed in the Indiana law.

Santorum was quick to respond: “Should a gay or lesbian-owned printshop have to print signs for the Westboro Baptists that say ‘God hates fags’?”

“If they have the money to pay, they should,” the student shot back, to “ooohh” from the audience.

Taking the gloves off, Santorum continued: “Should a Jewish printshop have to make signs for the KKK? Should a kosher deli have to serve non-kosher food? It’s a two-way street. Tolerance is a two-way street. If you’re saying that ‘your religious liberties are not as important as my -- fill in the blank,’ then I’ve got a problem with that.”

Peppered with other inquiries ranging from follow-ups on Iran policy and immigration to Santorum’s new book “Bella’s Gift,” about his severely disabled daughter, the theme of the Q&A always returned to gay rights.

“I am a proud and confident lesbian woman, and I’m just wondering why are you denying me my rights to marry the love of my life, to adopt my future children -- both of which I will do?” another student asked, to thunderous applause from half the room.

The former senator was ready to point out her fallacy:

The overly secure environment of the auditorium added to the obvious clash of ideologies as the members of GW YAF and various liberal and gay pride campus organizations came together: five security guards lined the walls of the auditorium.

Attendees were notified before the event not to bring any book bags or purses with them, and signs carried in protest were also not permitted. A posted message outside the auditorium read “any person who disrupts the event will be removed by the University Police Department.”

“If you intend to participate in the larger conversation about American politics and culture, it’s really important to understand about the 40 percent of Americans that call themselves conservatives,” said GW YAF President Emily Jashinsky after introducing Santorum. “I want to invite everyone to demonstrate their very best sense of inclusivity, tolerance, and respect tonight -- let’s have a great debate.”

Both Santorum and questioners were repeatedly interrupted by approving applause from both divisions of the audience -- yet Santorum coolly and patiently responded to even the most disgruntled students.

“No matter what your passion is on the issues, we need to have a system that says everybody’s allowed in,” Santorum said.

Santorum’s speech came on the eve of Trans Day of Visibility, hosted by the student group Allied in Pride -- a key opponent of GW YAF on campus.

“Their decision to bring Rick Santorum -- a man who has compared homosexuality to pedophilia and bestiality -- to campus the day before Trans Day of Visibility underscores their intolerance and pattern of hate,” Allied in Pride posted on Facebook.