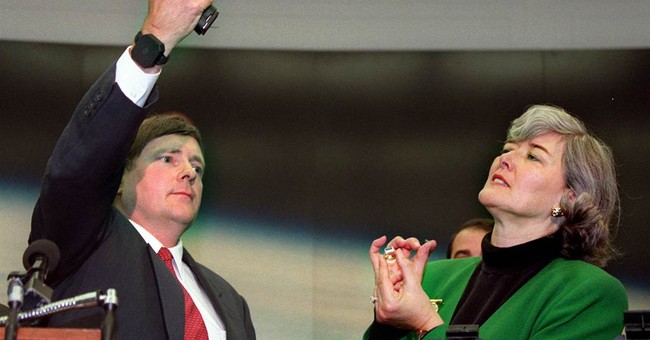 Editor's note: In the August issue of Townhall Magazine, where this column originally appeared, Townhall Finance's Michael Schaus tells the story of Colt Manufacturing, a company that embraced Big Government and is now facing bankruptcy, again.

Given that our commander in chief is a surprisingly decent firearm salesman, it’s a little odd that one of America’s most prolific gun manufacturers might soon be facing an agonizing financial death. But, that’s exactly where Colt’s Manufacturing Company is headed if things don’t change drastically.

It takes a very specialized form of failure for a gun company to miss out on the President Obama-inspired run on guns, the “assault weapon” craze of the 2000s, and the proliferation of concealed carry in the 1990s, but that’s exactly what happened. And, worse, this isn’t Colt’s first foray into fiscal failure.

In fact, this tendency of Colt to stumble onto hard times has a name in the industry: It’s called the “Colt curse.” It’s been around since Samuel Colt first bankrupted his hopeful arms company in the 1830s. God may have made man, and Samuel Colt may be credited with making men equal; but, it has always been an uphill battle. It turns out Colt was pretty good at making guns, but he was a failure at marketing and selling his contribution to the world of weaponry.

Lucky for Colt (and the generations that would later benefit from his contribution to the industry), the war with Mexico broke out in the 1840s. The aspiring gunsmith quickly found an audience in the U.S. Army for his innovative firearm designs. Realizing the full potential of crony-capitalism, the entrepreneur almost went broke entertaining politicians, generals, and frontiersmen. He was, undoubtedly, the Solyndra lobbyist of his day. With the helpful contract from America’s military, Colt quickly etched his name in America as the creator of the “gun that won the West.”

The company, however, was never quite capable of shaking their addic- tion to government contracts. In fact, it quickly became a centerpiece of their business model.

In the 1970s firearm manufacturing in the U.S. was adopting the model of America’s automotive giants. Unionization was prolific, and innovation was an afterthought. It didn’t work out for Detroit, and it almost ended in disaster for the firearm industry as well.

While most American companies scrambled for ways to avoid the Union-led decline into mediocrity, Colt happily hummed along with the help of military contracts and large government ship- ping orders.

The iconic manufacturer’s business was booming, right up until the moment that unions decided to do what they do best: go on strike. By 1988, the company had lost a number of high-dollar contracts, and the end of their beginning was clearly at hand.

In the decade to follow, their competitors warmly embraced America’s new- found fascination with the civilian market, concealed carry, and home defense. Colt, on the other hand, decided to take a more pragmatic approach. And, by pragmatic, I mean liberal approach:

A wealthy industrialist from the heart of a non-gun-owning Manhattan family decided he could steer the company to better times. With a man who knew nothing about guns at the helm, Colt embarked on their reimagined path to prosperity by introducing (and supporting) the idea of smart guns and federal gun permits.

As strange as it might seem, telling your most ardent customers that they should ask a fickle and hostile federal government for permission to handle your product isn’t a great business practice.

The new CEO (the last one was fired pretty quickly) still decided to put civilian ownership on the back-burner as he focused on appealing to the same Pentagon cronies that nearly drove the company into the trash-bin of history. There are only a handful of industries that relish the advent of war, and they all have something in common: they work for the Pentagon. As the Iraq War picked up, and with their sudden boom in government contracts, it looked like good times might finally be on the horizon.

In fact, good times seemed inevitable. Well, at least in theory. But if Colt had proven anything in its 178 years of existence, it’s that turning a profit is kinda tough sometimes. The company’s decision to whittle their civilian division down to a few obligatory 1911s wasn’t really doing them any favors, given that their competitors were rushing to fill the demand of a gun-hungry republic.

While Vice President Joe Biden, Obama, and Senate Majority Leader Harry Reid (D-NV) rambled on about gun control, Colt casually dismissed the idea of focusing on the civilian market. Heck, it was only within the last few years that Colt finally got around to deciding that a pocket pistol (the .380 Mustang) might be a good idea.

Today, the industry is seeing a decline from last year’s boom in sales. Colt’s civilian offerings are proving to be “too little, too late” for a market that is currently saturated with high-quality alternatives. And so, with a very specialized degree of failure, Colt has managed to paint itself into near bankruptcy. Their corporate bonds are rated as junk, and they’re continuing to pile on millions of dollars’ worth of debt.

The company might still survive. After all, they represent a history, a quality, and a heritage that is rare in today’s world. Their guns are quality products (even if you do pay a premium for those ponies on the slide) and their reputation is strong. But the company embraced too many values of the Left to survive long in a world that has proven to be hostile to their industry.

In the end, there are really only three things that are responsible for killing Colt: cronyism, support for gun control, and unions. You would think a gun manufacturer would know better than to sleep with government. I guess nobody shared that lesson with Colt’s management. •

Michael Schaus is the Associate Editor of Townhall Finance.