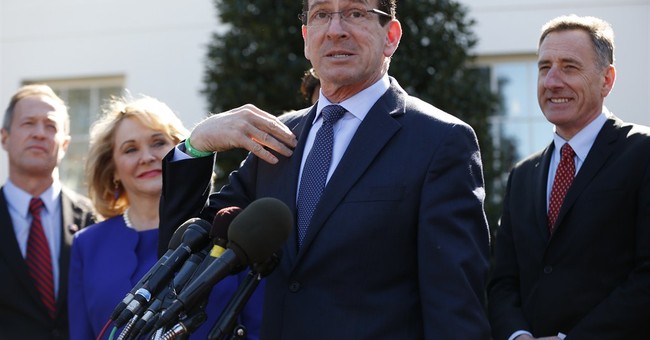 In the April issue of Townhall Magazine, Bearing Arms editor Bob Owens asks what would happen if a liberal government passed a new gun law but nobody obeyed it?

Connecticut Gov. Dannel Malloy (D) signed what the Hartford Courant called “the toughest assault weapons legislation in the nation” last year. It required owners of semi-automatic firearms to register all firearms designated as “assault weapons” with the state government, along with any “high capacity” magazines they may own, by December 31, 2013.

The Malloy regime expected Connecticut residents to register somewhere between 372,000-400,000 firearms, and roughly 2 million firearm magazines that held more than 10 rounds before January 1.

What they got instead was defiance.

Just 50,000 of the estimated 372,000 so-called “assault weapons” in the state were registered by the deadline, or less than 15 percent. That’s still far better than the anemic 38,000 “high capacity” magazines that were reported to authorities, out of 2 million.

Why is compliance so low? We can’t know for sure. After all, the owners of these firearms and magazines refused to register, so we can’t easily interview them. But the theory we’ve heard bandied about most frequently is that the owners of these firearms felt that registration was a forerunner of confiscation, and that they would rather become felons under the eyes of a vengeful state than become disarmed subjects.

The development has left the government stunned and unsure of how to respond, and has driven the editors of the anti-gun Courant into a sputtering rage.

The newspaper released an unsigned editorial on Valentine’s Day titled “State Can’t Let Gun Scofflaws Off Hook,” and argued that the state should use the background check database to hunt down non-compliant owners, presumably targeting them for police raids and arrests.

We can only assume that the Courant’s newsroom staff skipped American history in school, or they would know what happened the last time a group of government forces attempted a series of dramatic gun control raids in a neighboring state. As I recall, that day, April 19, 1775, went rather poorly for the British Regulars under Lt. Col. Smith.

Malloy’s staff seems to grasp their terrible predicament a bit better than the hotheads of the Courant. Sending 1,120 Connecticut State Troopers on SWAT-style raids against more than 80,000 suspect “assault weapon” owners could not possibly end well.

To date, Malloy and his allies in the legislature who rammed through these strict gun control laws largely remain silent on the fact that the citizenry has simply ignored them. What else can they do?

The only realistic option is for the government of Connecticut to pretend that their assault weapon ban never existed. To admit it exists, and that they can do nothing to enforce it, would reveal that the emperor and his court have no clothes.

A nearly identical problem is brewing next door in the much larger, more populous state of New York, thanks to Gov. Andrew Cuomo’s hastily-passed NY SAFE Act. That law demands that New Yorkers register their semi-automatic “assault rifles” with the government by April 15.

Cuomo faces an even bigger registration problem in New York than Malloy did in Connecticut because many of New York’s sheriffs are in near open revolt against the SAFE Act, and have stated publicly that they will not enforce it. While they have been less publicly vocal, New York State Troopers have quietly indicated that they, too, will do as little as possible to enforce the law.

New York Assemblyman Bill Nojay, a Republican from suburban Rochester, summed up Cuomo’s problem succinctly. “If you don’t have the troopers and you don’t have the sheriffs, who have you got? You’ve got Andrew Cuomo pounding on the table in Albany.”

As a result of the common revolt by New York gun owners and law enforcement against the SAFE Act, it is quite likely that the law’s April 15 deadline will reveal an even more spectacular refusal of citizens to register their arms, well exceeding 90 percent.

What will Cuomo do then? He has the option of following Malloy’s lead and just remaining silent.