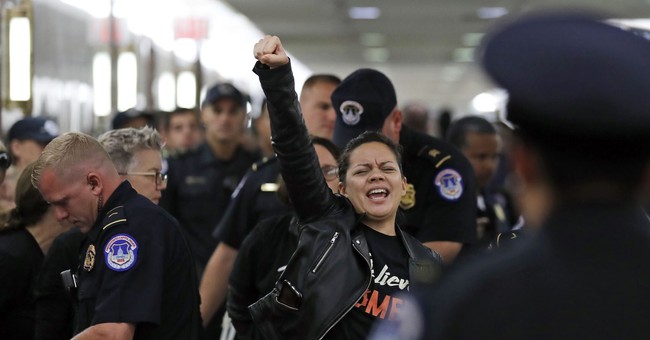 It’s going to be a crazy week. Thursday is when Brett Kavanaugh’s accuser, Christine Blasey Ford, is able to tell her story. The question is, will she show up? Senate Republicans have given her ample time and plenty of options to get her story on the record. She alleges that Kavanaugh, then-17, tried to sexually assault her at a high school party. There are no witnesses. There’s no corroborative evidence. Then, another woman by the name of Deborah Ramirez alleges that Kavanaugh exposed himself at a college party at Yale. Again, there’s no evidence and no witnesses. In both cases, the witnesses cited in the accounts refute the story. On the Yale accusation, they can’t even say that Kavanaugh was at the party in question. It’s a political hit job. Everyone sees it, and the GOP needs to keep moving this nomination forward.

That doesn’t mean that the Left isn’t going nuts. Sen. Ted Cruz (R-TX) and his wife, Heidi, were accosted and harassed at a restaurant in D.C. as if that’s going to change his vote. But if making yourself look like a bunch of dumba**es is your goal, then mission accomplished.

While the Kavanaugh fight is dominating the news, you might have missed how the media got played on the “scoop” that Deputy Attorney General Rod Rosenstein was going to be fired. The liberal media was gripped with fear. We’ll see what happens on Thursday. In the meantime, Trump delivered an epic speech at the United Nations, which did not go over well with the Iranian ambassador.

The GOP’s favorability numbers are now greater than the Democrats, spiking to their highest levels in nearly a decade. One of the reasons is that fellow Republicans are viewing their party with higher regard. Will that impact the midterms? We shall see, but with 42 days left, time is running out—but we still have a long ways to go. A lot can happen.