Democrat Mazie Hirono: We Should Believe in Climate Change as If It's a Religion, Not a Science 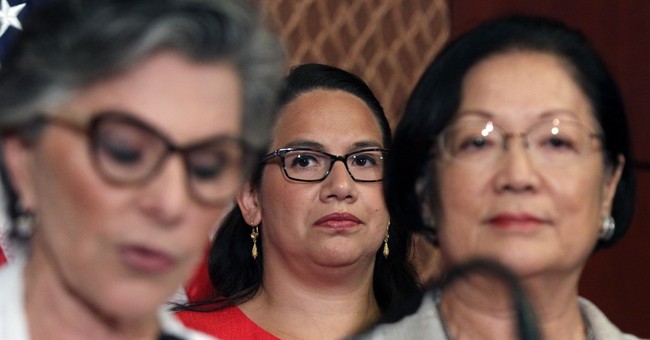 Does it feel like the mask is slipping off the Democratic party, folks? Do you think that ever since President Donald J. Trump was elected, party leaders have shifted so far left, that they make Barack Obama look moderate? Does it seem like what conservatives have been warning about leftists for years is suddenly impossible for anybody to deny? The latest example that progressives simply are not even trying to hide their insanity comes from Democratic Senator Mazie Hirono at Tuesday's "DACA prayer breakfast." While at the event ahead of the SCOTUS court case dealing with Deferred Action for Childhood Arrival recipients, the congresswoman told supporters to ramp up their fight against global warming by treating it as a religion. No, we're not joking.

"...These are times that call for us to do those things that we believe in, and to march, and not just to march, cause that's important to show solidarity, but then to do those things such as voter registration, get people out to vote, so that we can have people here who are truly committed to human rights, environmental rights -- climate change...believe in climate change as though it's a religion, it's not a science-- and all the things that need to be done, and there is a lot," Sen. Hirono told the crowd.

Now, some may argue this is a slip of the tongue. Perhaps she was saying that Congress needs more people who believe in climate change as a science, and not religion. You'd be excused for believing that leftists think climate change is a religion. After all, one "progressive seminary" had their students confess their sins against nature to plants in September.

Today in chapel, we confessed to plants. Together, we held our grief, joy, regret, hope, guilt and sorrow in prayer; offering them to the beings who sustain us but whose gift we too often fail to honor.

What do you confess to the plants in your life? pic.twitter.com/tEs3Vm8oU4